Results: Further history revealed a known diagnosis of CAH. The patient had been treated with glucocorticoid and mineralocorticoid replacement in childhood but stopped taking these medications against medical advice. During his hospital admission, he was noted to have elevated 17-hydroxyprogesterone, low cortisol with elevated ACTH levels, and male-level testosterone measurements. CT of the abdomen/ pelvis revealed a 23 cm mass in the left renal fossa and a 2.5 cm mass in the right renal fossa consistent with bilateral adrenal myelolipomas. The patient attended follow-up in clinic, but declined any further hormonal treatment as he identified as male and felt further treatment was unnecessary.

Conclusion: This case demonstrated the unique long-term effects of untreated classic CAH due to 21OH deficiency, including bilateral adrenal myelolipoma, adrenal compensation to the point of producing male-level androgens, and possibly PEs. Treatment with hydrocortisone was recommended to suppress ACTH and it was planned that the patient would eventually start on testosterone (although this would have been complicated by his bilateral PEs). Potential aetiologies for the PEs included vascular compression of the renal artery (which could explain the elevated EPO/erythrocytosis contributing to hypercoagulability) or the renal vein by the adrenal mass. 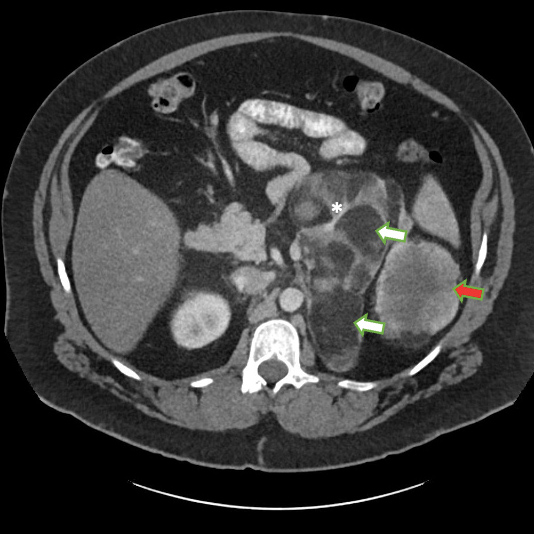