The Dangers of Immediately Performing a Sensitive and Specific Investigation versus the Dangers of Delaying It: A Cautionary Case of Hodgkin’s Lymphoma

A 60-year-old man was admitted with a 1-month history of fever and weight loss. Multiple lymphadenopathies and haemophagocytic lymphohistiocytosis were noted from the beginning, suggesting lymphoma. However, lymph node biopsy was deferred because lymph node biopsy was regarded as being invasive and requires general anaesthesia, and because other possible differential diagnoses including gastrointestinal malignancies and TAFRO syndrome were being considered. Instead, investigations including gastrointestinal endoscopy and bone marrow biopsy were prioritized. The patient was eventually diagnosed with Hodgkin’s lymphoma based on lymph node biopsy but died during chemotherapy. Physicians should prioritize the tests that are most directly related to the diagnostic outcome, even if they are invasive. 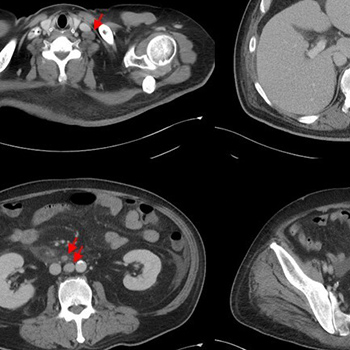 How to cite:
1.
Ito T, Sawachika H, Harada Y, Shimizu T. The Dangers of Immediately Performing a Sensitive and Specific Investigation versus the Dangers of Delaying It: A Cautionary Case of Hodgkin’s Lymphoma. EJCRIM 2020;7 doi:10.12890/2020_002138.