Magnetic Resonance Direct Thrombus Imaging (MRDTI) Can Distinguish Between Old and New Thrombosis in the Abdominal Aorta: a Case Report

A 43-year-old man complaining of abdominal angina for several months showed a large suprarenal aneurysm of the abdominal aorta with extensive circumferential wall thrombosis, complete occlusion of the right renal artery and a critically stenosed left renal artery on CT angiography. He suffered from severe hypertension and renal failure. A percutaneous transluminal angioplasty (PTA) was planned. After the PTA procedure, which was complicated by the development of left renal artery occlusion, successful rescue revascularization surgery was performed. Since we were hesitant to start anticoagulant treatment because of a high bleeding risk, magnetic resonance direct thrombus imaging was performed to assess the age of the extensive arterial thrombosis. The aortic thrombus showed a low signal intensity, which is indicative of chronic rather than acute thrombosis. Therefore, oral anticoagulant treatment was not started. The patient recovered without major complications. 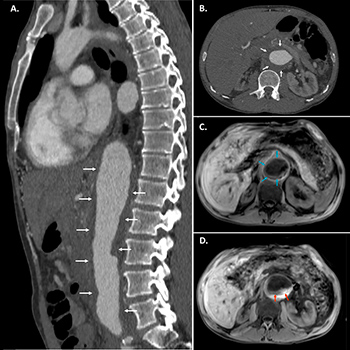