Home parenteral nutrition is a therapeutic option for chronic intestinal failure. A tunnelled central venous catheter is commonly used for self-application of nutrition and hydration over a long period of time; that is, months or years. Air embolization within the venous circulation can be caused by inconsistent self-handling of the catheter in combination with air bubbles in the infusion set. Paradoxical air embolization within the brain and coronary arteries together with catheter perforation is a rare medical and technical complication. The authors report the case of a 63-year-old woman with type 3 chronic intestinal failure treated with home parenteral nutrition. During the first year of treatment and use of the catheter a fatal complication occurred. The patient experienced recurring asystolic episodes and strokes with monoplegia during flushing of the catheter. Although 2 resuscitations were successful, the third was not, and the patient died. The cause of these life-threatening complications was an unknown patent foramen ovale, with paradoxical air embolization within the coronary and brain arteries. The authors discuss the clinical consequences of arterial and venous air embolization, the differences between these and the therapeutic algorithm with a link to practice. 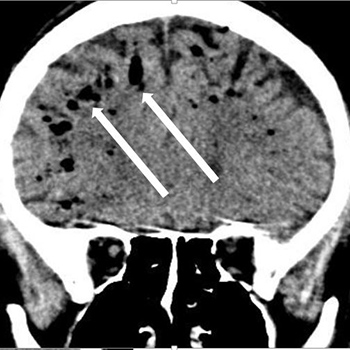