Conflicts of Interests: The authors declare there are no competing interests.
Patient consent: Obtained
This article is licensed under a Commons Attribution Non-Commercial 4.0 License

Disseminated tuberculosis (TB) can mimic metastatic disease because of its multi-organ involvement (including bones), which can make the diagnosis much more complicated. Tracheoesophageal fistula is a very uncommon manifestation of TB, as is multifocal skeletal TB. There are reports of TB presenting either as multifocal skeletal TB or as tracheoesophageal fistulae, but we could not find any case reports describing both of these entities in a single patient and essentially mimicking a metastatic oesophageal neoplasm. However, we here describe one such case, which was managed medically.

A 33-year-old pulmonologist from Southern India, with no known co-morbidities, had a history of COVID-19 infection in January 2022. Following this, he developed an intractable dry cough, which did not settle with the administration of routine cough syrup. Suspecting lung parenchymal involvement, he self-medicated with oral steroids for around 3 months. He developed mid-thoracic back pain in the first week of July, mainly in the paraspinal regions, not associated with any local swelling. There was a history of an evening increase in temperature (maximum temperature of 37.7°C), associated with night sweats, which started along with back pain. There was no history of weight loss, swallowing or breathing difficulty, myalgia, headache, or bowel or bladder disturbances. The patient’s history was negative for any IV drug use or high-risk sexual behaviours.
A CT scan (without contrast) of the chest was conducted in a nearby hospital and the results were notable for reticular interstitial thickening in the left perihilar region and multiple lytic lesions in various ribs (images unavailable). The differentials given were sarcoidosis and a metastatic neoplasm with an unknown primary. An FDG PET CT scan of the whole body conducted in the outside hospital was notable for metabolically active asymmetric mural thickening in the distal thoracic oesophagus with mild luminal narrowing. A few metabolically active mediastinal left hilar and para oesophageal lymph nodes were present. The PET CT scan also revealed multiple focal areas of metabolically active, lytic, sclerotic lesions in a few bilateral ribs, multiple vertebrae, the sacrum, bilateral pelvic bones and left proximal femur. Pathological fractures were present in some of the bilateral ribs with lytic lesions. There was no evidence of significant pulmonary nodules or metabolically active disease anywhere else in the body (Fig. 1). The patient was referred to our centre for further evaluation and management in August 2022. 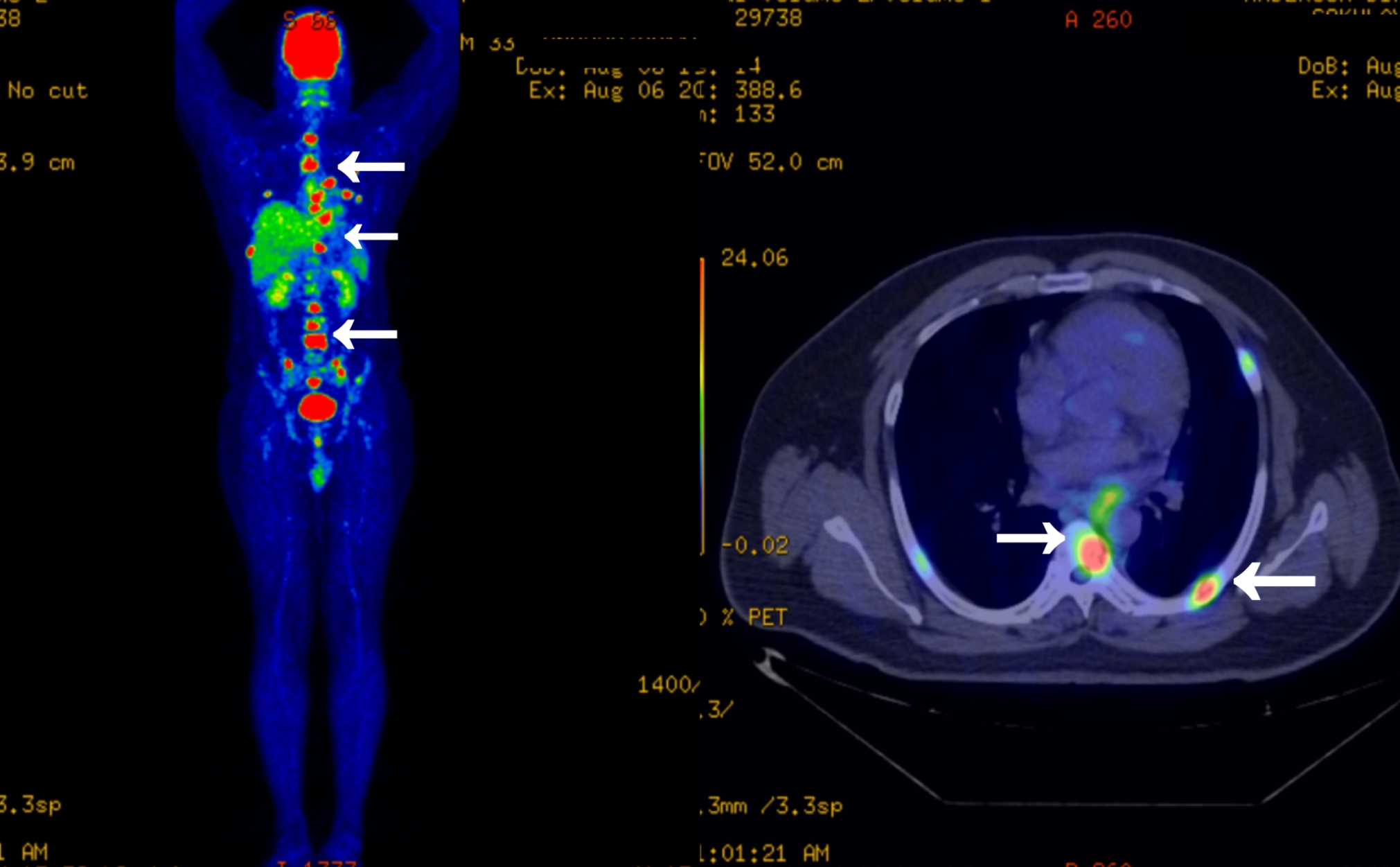 On examination, the patient was well built and his vital signs including temperature, pulse rate, blood pressure, oxygen saturation, and respiratory rate were well within normal limits. Systemic examination was unremarkable. Laboratory work-up was significant for a white blood cell count of 8.99×103/mm3 (4.0–11×103/mm3) and haemoglobin of 15.8 g/dl (12.0–16.0 g/dl) with an elevated erythrocyte sedimentation rate of 42 mm/hr (0–20 mm/hr). His chest x-ray did not reveal any significant abnormalities. Serum calcium and acetyl cholinesterase levels were within normal limits. Cancer biomarkers such as alkaline phosphatase, carcinoembryonic antigen, alpha fetoprotein and beta-HCG were not elevated. Serum protein electrophoresis did not reveal any M-protein bands.
A medical gastroenterology consultation was obtained and the patient underwent an oesophagogastroduodenoscopy (OGD). OGD was notable for two fistulous openings in the oesophagus, the first one at 29 cm and the other at 35 cm from the incisor (Fig. 2). A biopsy from the edge of a tracheoesophageal fistula (TEF) was sent for histopathological examination and Xpert® MTB/RIF Ultra assay. Since the specimen was scanty, it could not be sent for bacterial and mycobacterial cultures. The Xpert® MTB/RIF Ultra assay was negative. Histopathology revealed granulomatous inflammation with rare acid-fast bacilli (AFB) consistent with mycobacterial infection (Fig. 3).
It was decided to manage the patient conservatively and he was started on first-line antitubercular therapy (ATT) with once daily oral isoniazid 300 mg, rifampin 600 mg, ethambutol 1200 mg and pyrazinamide 1000 mg, along with daily pyridoxine supplementation. He was discharged with the advice of completing 12 months of treatment with regular monthly follow-ups with liver function tests. 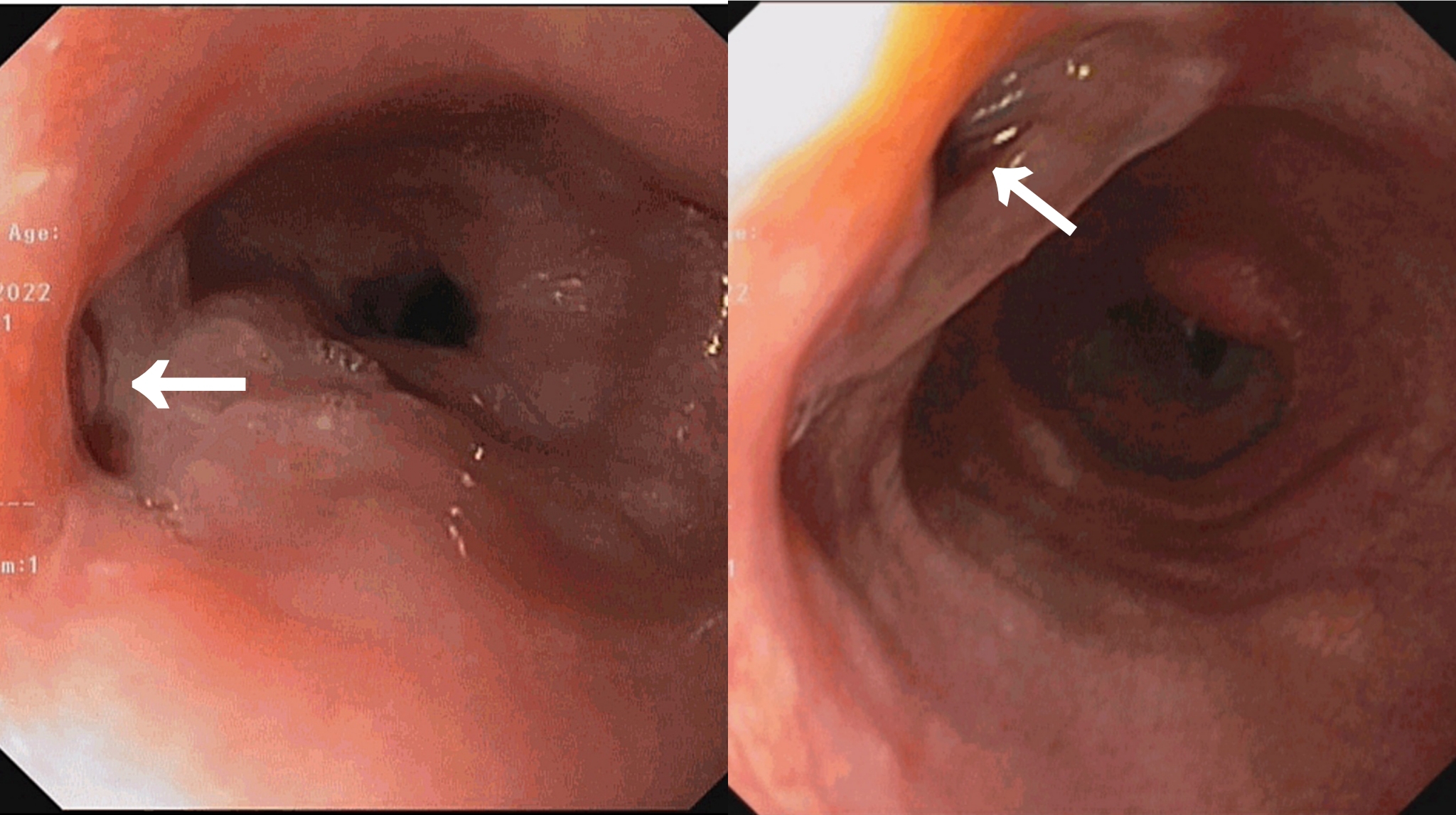 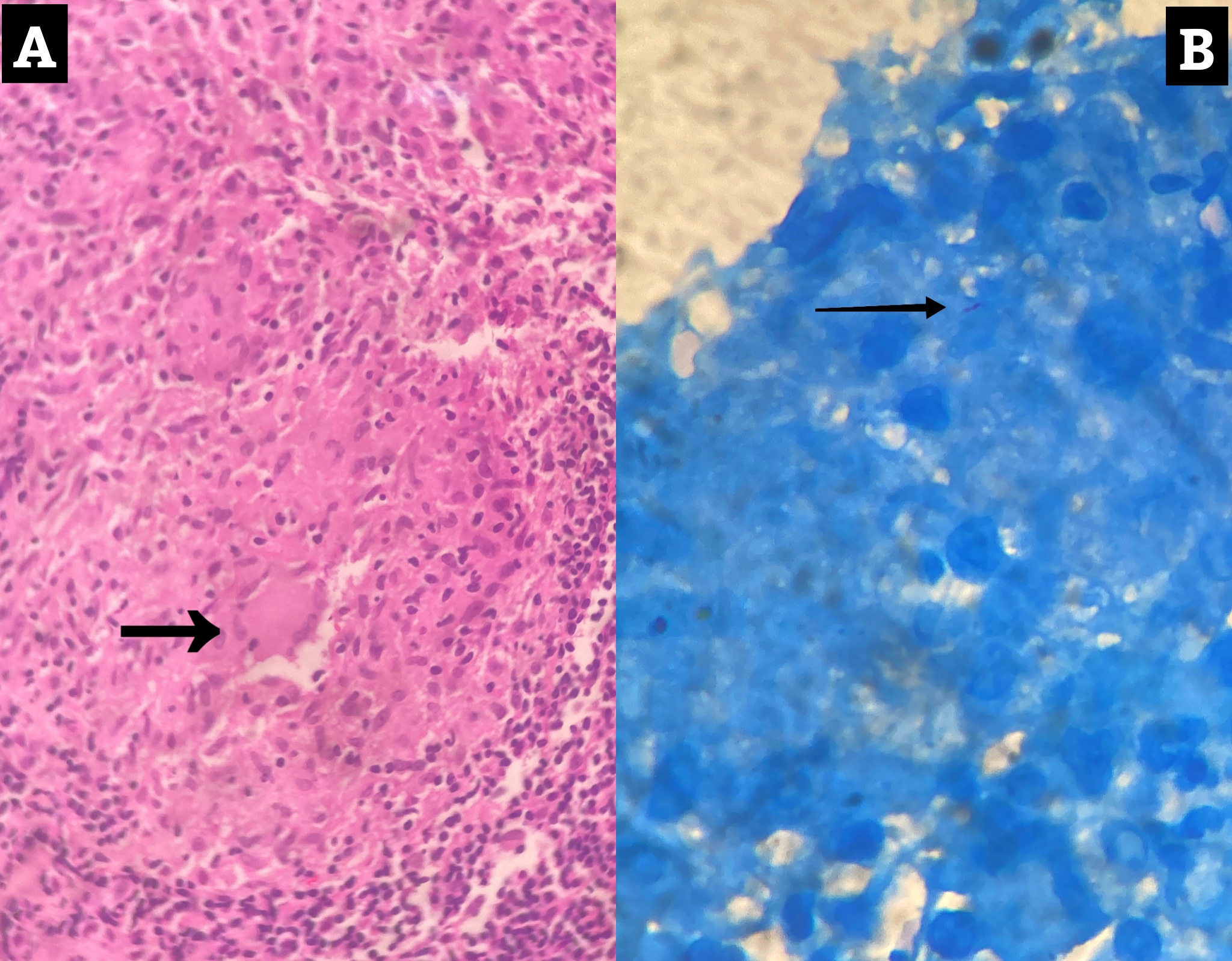 An unnatural connection (fistula) between the oesophagus and the trachea is known as a TEF [1]. Tracheoesophageal fistulae are most frequently congenital and appear shortly after birth with respiratory and gastrointestinal (GI) issues. More than half of TEFs in adults are acquired and frequently occur in conjunction with oesophageal or lung cancer. Long-term endotracheal intubation, trauma, ingesting caustic substances, endoscopic or surgical procedures, radiation, or infectious and inflammatory disorders can all cause acquired, non-malignant TEFs [2]. Acquired non-malignant TEFs are rare, while those associated with tuberculosis (TB) are even more rare [3]. Tuberculosis spreads principally via aerosols. Aerosols containing TB bacilli can be deposited in the respiratory tract, leading to one of four outcomes: immediate eradication of the pathogen, primary illness, latent infection, or reactivation illness. After an initial infection, unchecked bacterial proliferation can cause bacilli to spread haematogenously and cause disseminated/miliary TB [4].
Disseminated TB can involve any organ. Rarely, it may cause multi-focal involvement of the bones, mimicking metastatic malignancy. An estimated 20% of all TB infections are skeletal in nature. Multifocal skeletal TB is a very uncommon manifestation that is described asTB infection in two or more bones or joints. It accounts for around 5% of all cases of skeletal TB. If the illness is detected early enough, people with multifocal skeletal TB have a good prognosis and can be fully cured. An FDG PET scan may be useful while diagnosing such lesions. According to a literature study, the majority of patients with multifocal skeletal TB were cured by taking conventional antitubercular drugs for 12–18 months [5].
Gastrointestinal TB accounts for 1–3% of all TB cases worldwide. From the oesophagus to the anus, the entire human gastrointestinal tract may be affected. The ileocecal zone is the most frequent site, accounting for 44–93% of cases [4, 6]. The majority of cases of secondary oesophageal TB in the literature are due to the direct extension of mediastinal or pulmonary TB into the oesophagus, making primary oesophageal TB a rare occurrence. Patients with oesophagobronchial or TEFs can present with symptoms such as coughing after consuming liquids and dysphagia. These signs and symptoms are comparable to those brought on by the much more common carcinoma of the oesophagus [6, 7]. Non-invasive diagnostic modalities such as CT can aid in the diagnosis of oesophageal TB. The primary procedure for obtaining biopsy material is an oesophageal endoscopy. A characteristic caseous lesion, AFB, or molecular methods like Xpert® MTB/RIF or mycobacterial culture are required for the diagnosis of TB [4, 7, 8]. Tissue biopsy also effectively rules out a metastatic neoplasm. The current trends in TEF repair are interventional treatments like stenting using bronchoscopy and endoscopy, which can lessen symptoms and increase survival. According to one study, medical therapy alone had a 90% success rate in curing oesophageal fistulae [6].
Treating TB in a country like India is challenging. Drug-sensitive TB is treated in two phases, namely the intensive and the continuation phases. The intensive phase lasts for 8 weeks and involves the administration of isoniazid, rifampicin, pyrazinamide and ethambutol at daily dosages by weight band categories under direct observation. The 16-week continuation phase (CP) consists of daily doses of isoniazid, rifampicin and ethambutol. In cases of disseminated, skeletal or CNS TB, the CP must be prolonged for up to 24 weeks [8]. The World Health Organization recommends either a shorter all-oral bedaquiline-containing regimen or a longer regimen for multidrug/rifampicin-resistant TB (MDR/RR-TB) [9].
We conclude by stating that it is important to keep disseminated TB in the differential diagnosis when a patient presents with vague, multisystemic symptoms, especially when the patient has been exposed to TB. It is also of equal importance to rule out malignant disease using a tissue biopsy. An early and precise diagnosis can produce significant therapeutic benefits.