Conflicts of Interests: The authors declare there are no competing interests.
Patient consent:Written informed consent was obtained from the patient for publication of this case report and any accompanying images.
This article is licensed under a Commons Attribution Non-Commercial 4.0 License

Central venous lines are often inserted but their removal requires some precautions. We describe a 51-year-old female patient who was due for discharge but had an unfortunate event arising from removal of her central venous line even though the appropriate measures had been taken. She experienced an acute ischaemic stroke secondary to air embolism. The deficits persisted even though extensive efforts were made to reverse them. This case reminds clinicians that bedside procedures can result in devastating complications even if all precautions have been followed. We review the mechanisms of air embolism, provide suggestions to limit its incidence following central line removal, and recommend therapeutic measures.

A 51-year-old female patient with a history of cervical cancer followed by hysterectomy was initially admitted to hospital for bowel obstruction and underwent a colostomy and internal jugular (IJ) central venous catheter (CVC) placement. She was scheduled for discharge. However, upon removal of the CVC while she was in a supine position and asked to hold her breath, she suddenly became unresponsive and developed a left-sided gaze. Physical examination showed reactive pupils but no response to painful stimuli. Seizure-like activity was noted and controlled with a benzodiazepine. Hypoxia with an SpO2 of 60% was evident. Computed tomography (CT) of the head showed extensive gas in the bilateral superior cerebral hemispheres and subarachnoid spaces and also in the bilateral infratemporal fossae and cavernous sinuses (Fig. 1). Subarachnoid haemorrhage was also noted. CT angiography of the neck showed gas in the distal right IJ vein (Fig. 2). No thrombolytic therapy was given. Echocardiography showed no evidence of a patent foramen ovale (PFO). The patient was started on levetiracetam and transferred to another centre for hyperbaric oxygen therapy (HBO). She was transferred to the other facility 6–9 hours after the event, received five sessions of HBO and was then transferred back to the primary hospital.
Physical examination showed right gaze deviation, left homonymous hemianopia, diminished sensation on left V1–3, and left-sided weakness of 0/5 on the upper and 2/5 on the lower limbs. Magnetic resonance imaging (MRI) of the brain showed right frontal and parietal, left frontal, and bilateral gangliocapsular strokes (Fig. 3). The patient was not started on dual antiplatelet therapy. Her hospital course was complicated by further bowel obstruction and surgery but improved and she was discharged home.
Follow-up a few months later showed no clinical improvement in motor function on the left side. Brain MRI only showed evidence of right frontal encephalomalacia. 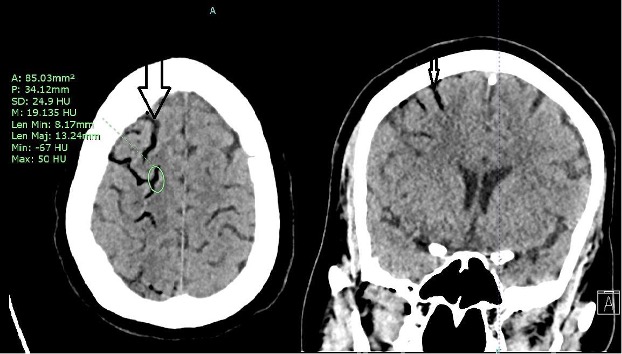 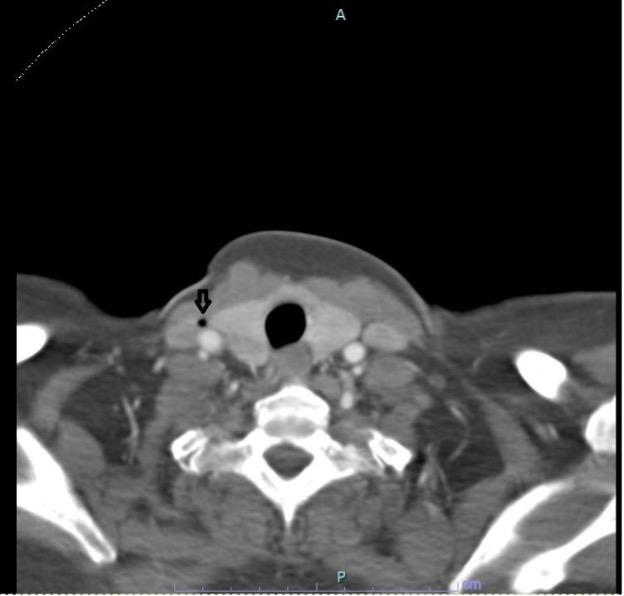 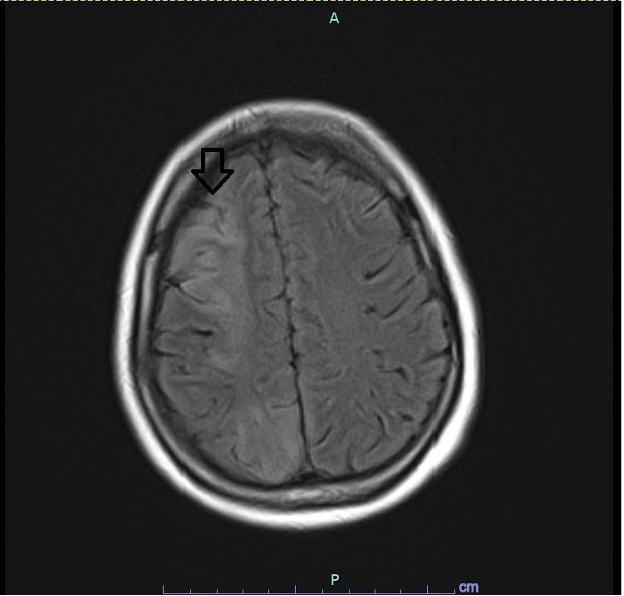 Air can enter the bloodstream when venous pressure is lower than atmospheric pressure as in deep inspiration, the patient is in an upright position, or hypovolemia is present at the time of insertion, manipulation or removal of a central line. Air can reach the brain through an atrial septal defect or PFO, via retrograde cerebral venous air embolism due to the lower specific weight of air compared with blood or due to incomplete filtering of air in normal pulmonary capillaries, or the presence of pulmonary arterial-venous malformation [1]. In our patient, the predominant involvement of the right hemisphere compared with the left along with the lack of a PFO suggests that the event was mainly due to retrograde venous embolism.
Air embolism should be suspected if there is sudden-onset hypoxia, which is a late feature, or neurological deficit after CVC manipulation. If suspected, the patient should be placed in the left lateral and Trendelenburg position, known as Durant’s position, with 100% oxygen to attempt to reduce the amount of nitrogen in the embolism. Steroids can be used to prevent oedema. The same concept prompts the use of HBO, especially in case of neurological deficit or evidence of end-organ damage, although the guidelines do not include this as a recommendation. However, case reports and series provide evidence of the efficacy of HBO. A case series of 16 patients treated with hyperbaric oxygen showed that 50% of patients had complete recovery, 31% had partial relief and 19% received no benefit with death in 12.5% of patients [2]. Better outcomes are related to earlier intervention. The maximum benefit is achieved if HBO is given within the first 6 hours but it can still be beneficial up to 30 hours [3].
Air embolism can be prevented by avoiding manipulation of the CVC while the patient is sitting or during inspiration. If needed, Trendelenburg positioning is also advised to make sure that the venotomy site is below the level of the heart. The patient can also perform a Valsalva manoeuvre or forced expiration. Hydration of the patient prior to manipulation is important to maintain venous pressure. After CVC removal, pressure should be applied for 5–10 minutes followed by occlusive dressing and the patient should remain supine for at least 30 minutes [4]. Other recommendations include the avoidance of heparin before CVC removal or if heparin has been used, a protamine antidote is recommended [5].