Dasatinib is a second-generation tyrosine kinase inhibitor with activity on the BCR-ABL fusion gene. It is used in the treatment of BCR-ABL positive chronic myeloid leukaemia and has the known side effect of pleural effusion. This usually involves exudate with the presence of lymphocytes. A more uncommon side effect is the development of a chylothorax. We describe a case of a 67-year-old man with chronic myeloid leukaemia, for which treatment with dasatinib, with the presence of a right-sided chylothorax. The man presented at an outpatient consultation due to complaints of exertional dyspnoea. Radiographic imaging showed the presence of a right-sided pleural effusion. Several punctures were performed with an evacuation of 4,900 mL bloody chylous fluid in total. Each puncture revealed an increased concentration of triglycerides on the fluid, hence confirming a recurring chylothorax. A pleurodesis was performed as a final therapy. Bosutinib was substituted for dasatinib eight months prior to initial admission, making this the first reported persisting dasatinib-induced chylothorax after discontinuation. The pathophysiology has not yet been fully elucidated; it is suspected to involve an interaction on the PDGFR-β pathway.

Dasatinib is a potent second-generation, oral tyrosine kinase inhibitor (TKI) which is used in the therapy of breakpoint cluster region Abelson (BCR-ABL) positive chronic myeloid leukaemia (CML). Dasatinib is known to have fluid retention related secondary effects, most commonly presenting as a pleural effusion (20%–33%) [1,2]. An uncommon aetiology of this effusion is chyle, which is named chylothorax. There is no data yet describing the occurrence rate of chylothorax with dasatinib use, but there is growing evidence of possible causality in case reports [3–5]. We describe a case of a delayed dasatinib-induced chylothorax where the patient developed a worsening of chylothorax after discontinuation of the medication.

A 67-year-old man was seen at the outpatient cardiology department with a complaint of progressive dyspnoea. The patient is known to have stable coronary artery disease and heart failure with a preserved ejection fraction (HFpEF). He underwent coronary artery bypass grafting (CABG) in 2019. Furthermore, the patient was diagnosed with chronic myeloid leukaemia in 2019, for which initial therapy with dasatinib at 100 mg daily was started. Due to recurring episodes of left-sided pleural effusion this therapy was tapered off, and a left-sided pleurodesis was performed in April 2019 with subsequent minimal left-sided pleural fluid on further follow-up. The patient developed difficult-to-control oedema in follow-up but declined to switch to an alternative TKI. Due to increasing peripheral oedema and development of a right-sided pleural effusion, dasatinib was eventually switched to bosutinib in July 2021.
At the time of the consultation in March 2022, the man mainly described a complaint of exertional dyspnoea, situated in the third class of the New York Heart Association (NYHA) classification. The complaints were slowly progressive over several weeks. No increase in peripheral oedemas was noted. On clinical examination, muffled breath sounds on the right and the presence of inspiratory rales were noted. A radiographic image (Fig. 1) showed the presence of bilateral pleural fluid, significantly more on the right than on the left. Because of the initial suspicion of recurrent heart failure and given the cardiac history, the man was admitted for intravenous diuretic therapy. However, weight reduction and symptom control proved to be difficult. On the third day of admission there was only a slight improvement of his symptoms. A CT scan was performed and showed the presence of a right-sided pleural effusion (Fig. 2). 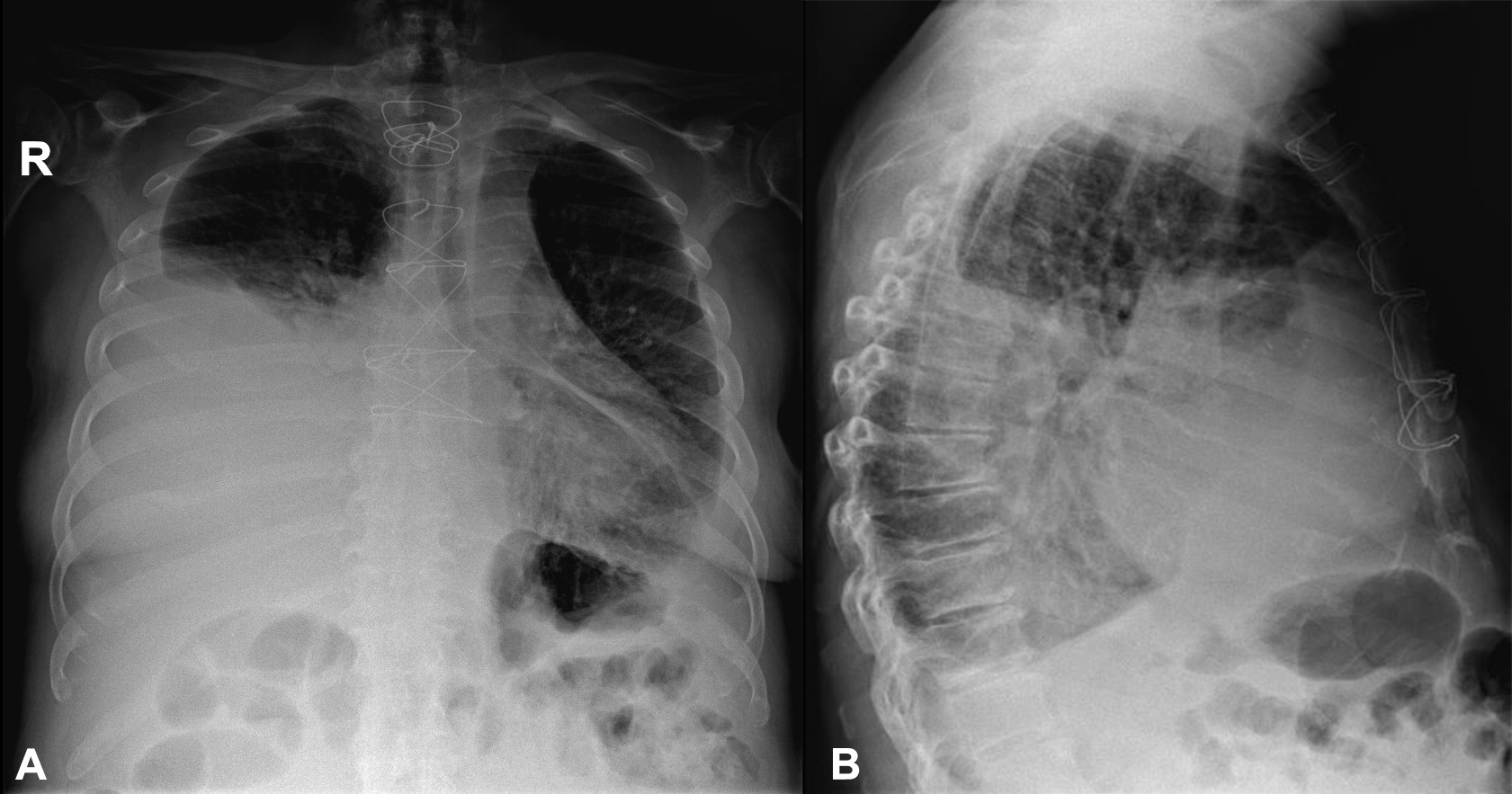 An ultrasound-guided pleural puncture was performed for symptom relief and yielded 1,800 mL of reddish milky fluid (Fig. 3). The puncture was incomplete and interrupted prematurely due to the presence of coughing. A cell count was performed on the fluid which showed 1,009/µL leukocytes and 145,000/µL erythrocytes. The sugar level was 117 mg/dL. Total protein was 42 g/L and lactate dehydrogenase 134 U/L. Further biochemical analysis showed the presence of 969 mg/dL triglycerides, thus confirming a chylothorax. Two more pleural punctures were performed during the admission, evacuating 1,900 mL and 1,200 mL of bloody chyle respectively. In total, 4,900 mL of fluid was removed.
In terms of therapy, a medium-chain triglyceride diet was started. The diuretics, which had been started earlier, were maintained. At the follow-up consultation 2 weeks after admission, new imaging was performed, which revealed a recurrence of pleural fluid in the right hemithorax. A new puncture was carried out, evacuating 3,000 mL of chylous fluid. Given the recurrent nature, a right-sided pleurodesis was performed. Thoracoscopy showed a white, milky deposit at the lung (Fig. 4). 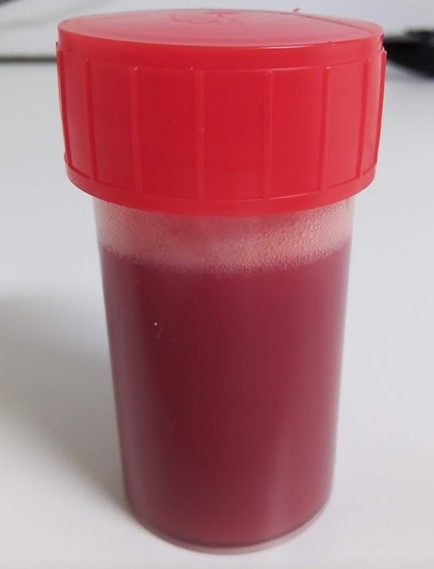 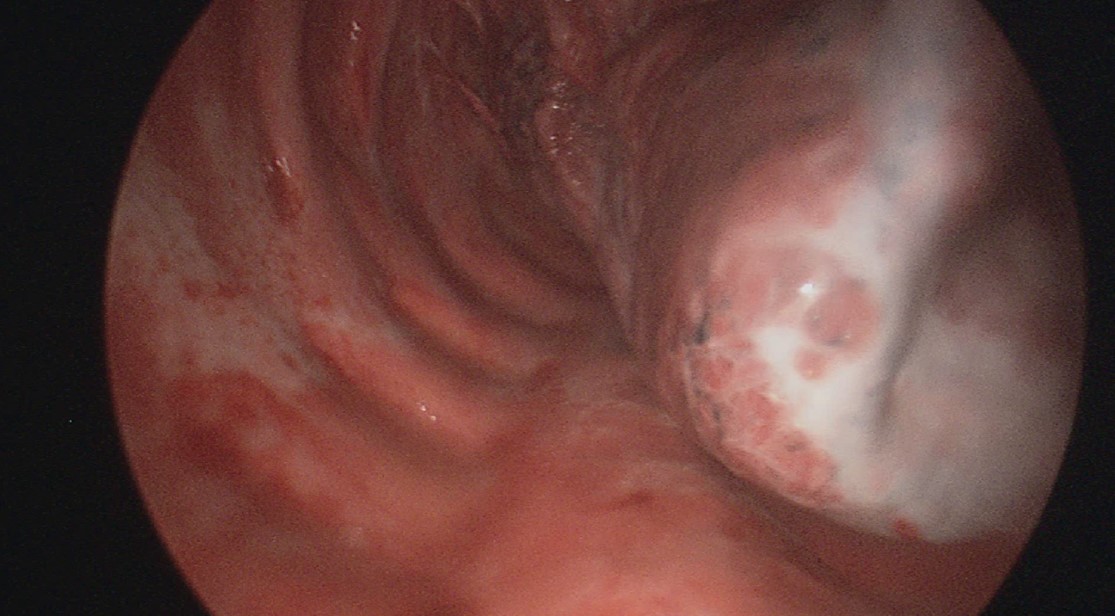 Figure 3. Specimen sample of pleural fluid at the first puncture, in which 1,800 mL of bloody milky fluid was drained.
Figure 4. Thoracoscopic image where the presence of the white, milky substance can be seen at the lung. Afterwards, a pleurodesis was performed.

Dasatinib use is a rather rare cause of a chylothorax, and as far as current literature understands, one of the only pharmacological causes. Chylothorax is a direct result of disruption of the thoracic duct, either traumatic (e.g. cardiac surgery), or non-traumatic by lymphatic obstruction (e.g. lymphoma, sarcoidosis, superior vena cava syndrome) [6]. In this case the patient also had a history of cardiac surgery, but this does not seem to be the origin, judging by the time frame.
The exact pathophysiological mechanism of the occurrence of chylothorax in dasatinib has not yet been fully elucidated. Previous speculations suspect a link to the inhibition of platelet-derived growth factor receptor beta (PDGFR-β). This growth factor is responsible for angiogenesis as well as lymphangiogenesis. Inhibition of PDGFR-β in this way would result in fluid retention and in extension, passive leakage of chylous fluid into the thorax [1–4]. A recent experimental animal study in which high doses of dasatinib were given to rats showed an adaptation of endothelial barrier integrity, which increased pulmonary vascular endothelial permeability leading to pleural effusion. Furthermore, dilation of pulmonary lymphatic vessels was also demonstrated [7].
Initial therapy consisted of intravenous diuretics, with no significant result as already described. Due to persisting and recurrent pleural effusion, multiple thoracenteses were performed, showing the chylous fluid every time. In this light, we pointed at dasatinib as the main cause, in absence of another explanation and considering the presence of the effusion already, before the switch to bosutinib. The consensus is to taper medication dosage and even change the therapy if re-accumulation of pleural effusion occurs [3,4]. Dasatinib is the only known TKI to have chylothorax as potential side effect; the other TKIs, especially bosutinib, are not known to cause chylothorax. As far as our current understanding goes, we report the first case of recurring dasatinib-induced chylothorax even after discontinuation of this therapy, 8 months prior to admission.

We describe a patient with a dasatinib-induced chylothorax. This is a rare complication of dasatinib use. A more common secondary effect is the accumulation of pleural fluid. In this case we describe a chylothorax even after the therapy was stopped 8 months previously. We performed multiple thoracocentesis procedures as initial therapy followed by a pleurodesis. As far as our current understanding goes, we report the first case of a recurring dasatinib-induced chylothorax even after discontinuation of this therapy.