Conflicts of Interests: The authors declare there are no competing interests.
Patient consent: Consent was obtained from the patient who participated in this study.
This article is licensed under a Commons Attribution Non-Commercial 4.0 License

Glomus tumour is a rare benign mesenchymal neoplasm usually located in the dermis and subcutis, and most commonly found in the extremities. Glomus tumour in the gastrointestinal system is rare and its symptoms unspecific. The diagnosis of gastric glomus tumour is challenging due to the lack of specific findings on imaging and blood analysis, and so is usually based on histology and immunochemistry. We describe the case of a 22-year-old man admitted for pallor and anaemia, the diagnostic path, treatment and follow-up. The present case suggests that this rare entity should be considered in the differential diagnosis of gastric lesions.

Glomus tumour (GT) is a rare, benign mesenchymal neoplastic proliferation composed of modified smooth muscle cells arising from the glomus body [1, 2]. It is most commonly found in peripheral soft tissue and the distal extremities [2, 3], and accounts for approximately 2% of soft tissue neoplasms [4] and 1% of gastrointestinal stromal tumours (GISTs) [1]. Gastric glomus tumours (GGTs) are rare [2, 3]. The first case was reported in the literature in 1951 by Kay et al. [3], with only few cases reported since [5]. These tumours are usually located in the antrum or pylorus and mostly seen in the submucosa and muscularis propria [5]. In this report, we present a case of GGT in a young Caucasian man.

A 22-year-old man presented to the emergency room (ER) with a history of skin pallor for the past 6 months, without any other associated symptoms. His past medical history revealed the patient had spina bifida occulta corrected in childhood and hyperactivity disorder. His family medical history was unremarkable. The patient had been evaluated 6 weeks previously by his family physician when blood analysis had revealed slight anaemia (haemoglobin (Hb) of 12 g/dl) associated with iron deficiency (iron of 20 ng/dl). His doctor started him on oral iron supplementation. An abdominal ultrasonography did not show any positive findings. Blood analysis carried out 6 weeks later revealed worsening anaemia (Hb 10.6 g/dl, MCV 76.2 fl, iron 12 ng/dl, ferritin 4 ng/dl, TSI 3%) and recurrence of pallor.
At this time the patient was sent to ER for further evaluation.
In the ER the patient was described as conscious and oriented, with pale mucous membranes but hydrated and haemodynamically stable, without fever. Cardiac and pulmonary auscultation was normal. There was no oedema and abdominal palpation did not reveal any palpable masses. Extended blood analysis was carried out (Table 1). 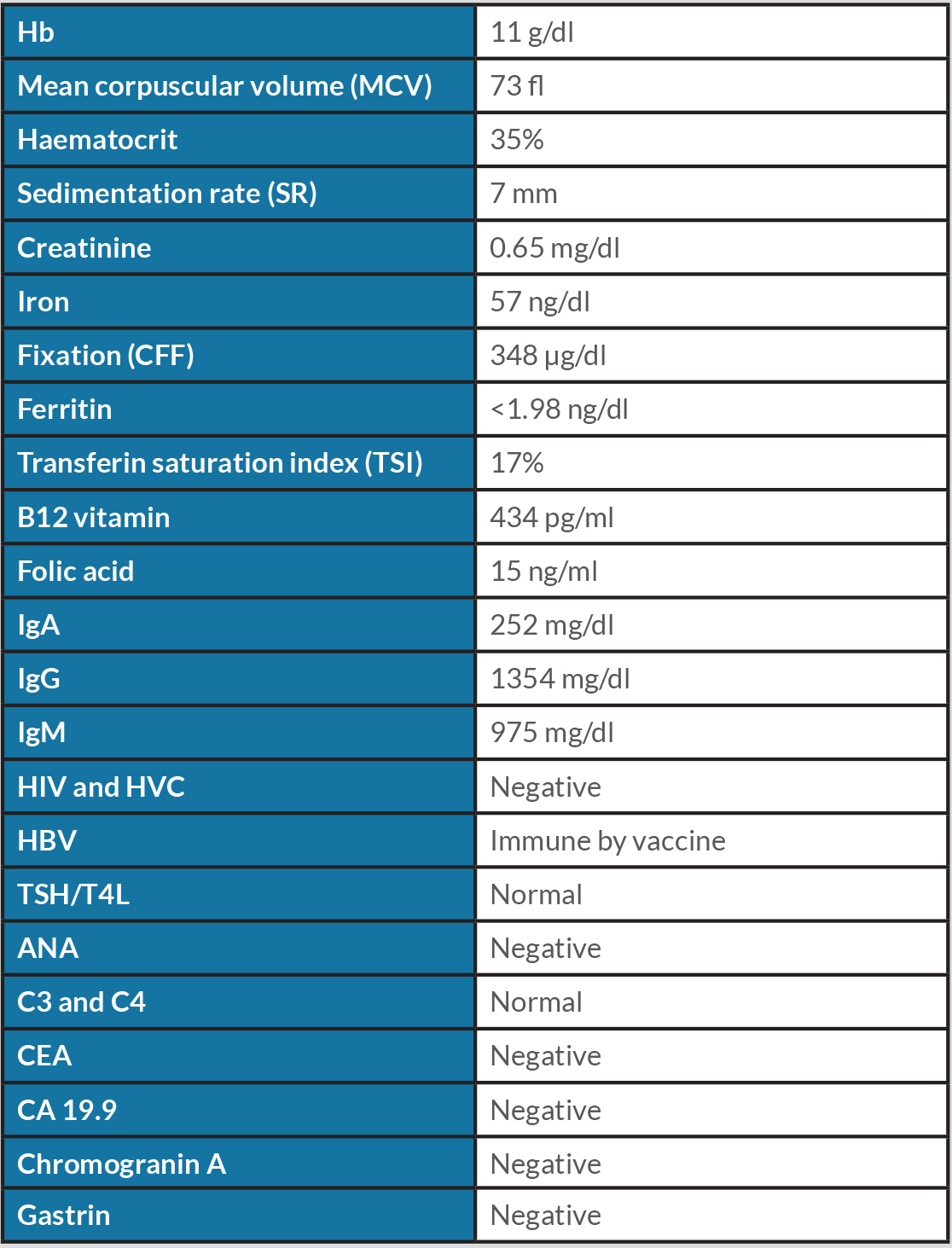 The gastric endoscopic study showed a ‘lesion of 50 mm with an infiltrative aspect, with ulceration, in the greater curvature of the gastric body’. As the diagnostic hypothesis was a gastric neoplasm or GIST, a gastric biopsy was performed (Fig. 1). Computed tomography (CT) of the thorax-abdominal-pelvic region showed an ‘[i]ntraparietal nodular lesion in the greater curvature of the gastric body, measuring approximately 2.6×3.3 cm, bulging the gastric mucosa and exophytic component, demonstrating accentuated enhancement by intravenous contrast (GIST?), without other lesions’ (Fig. 2).
The patient underwent atypical gastrectomy via laparoscopy, with no intrasurgical complications. Gross examination of the resected specimen showed a 3.1×2.8 cm lesion (Fig. 3) with a cross-section revealing a well-circumscribed solid tumour. Microscopy showed ‘aspects suggestive of a glomus tumour of the stomach with clear margins. Chronic gastritis lesions coexist with signs of minimal activity’, while tumour histology revealed a ‘[g]lomus tumour of the stomach. The size of the tumour and the mitotic index suggest that it is a tumour with uncertain malignant potential’. Immunohistochemical staining was positive for alpha-smooth muscle actin, without staining for desmin, c-kit, CD34, S-100, chromogranin A, synaptophysin or CD56. Approximately 10% of cells were positive for the proliferation marker Ki-67.
The patient remained asymptomatic 12 months after surgery with endoscopy revealing a healed scar and blood analysis showing resolution of anaemia. 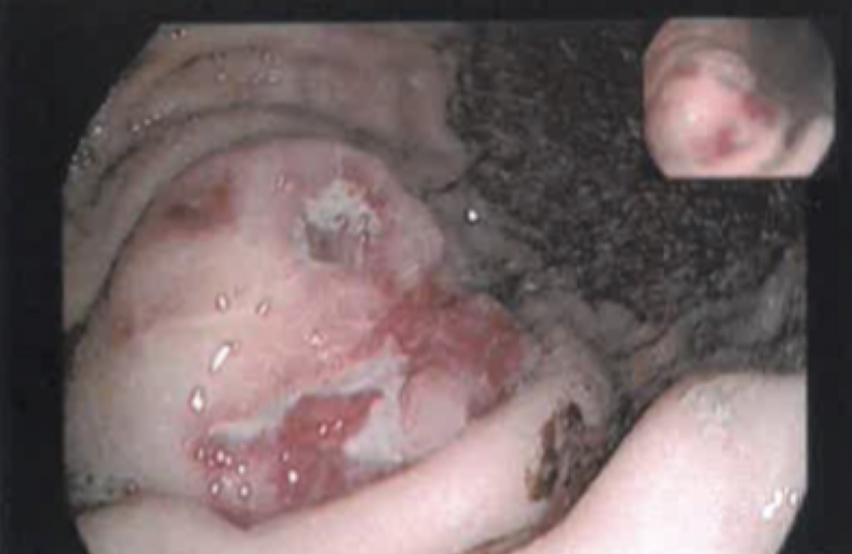 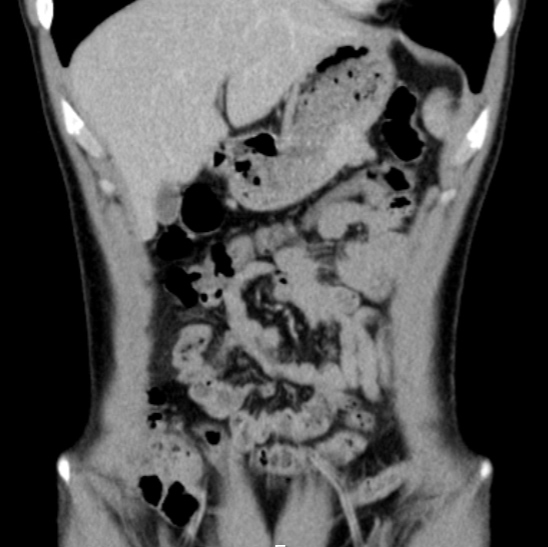 We describe a case of GGT treated by atypical gastrectomy via laparoscopy. GGTs account for approximately 1% of all gastrointestinal soft tissue tumours [1, 2], with an incidence 100 times lower than that of GIST [4]. GGTs have a 3:1 female:male ratio, and are more frequent between 28 and 79 years of age [2] and in non-Caucasians [3, 4]. The symptoms are non-specific, ranging from asymptomatic anaemia to abdominal or epigastric pain or upper gastrointestinal bleeding [5].
GGTs are most often solitary [6] and located in the lesser or greater curvature and the peripyloric region. They are usually accompanied by mucosal ulceration. The lesion develops submucosally and grows towards the richly vascularized gastric lumen, which promotes gastrointestinal bleeding and anaemia [4, 6]. GGTs lacks specific and endoscopic characteristics and are difficult to differentiate from the more common GISTs [1, 4]. On CT, the tumour most frequently shows dense homogeneous enhancement in arterial phase and persistent enhancement in venous phase [2], sometimes with calcified spots [4].
A conclusive diagnosis can only be confirmed by histology and immunohistochemistry [1] as preoperative radiology results may be uncertain[6]. Histology shows that gastric submucosal neoplasms are composed of a mixture of smooth muscle bundles sometimes with associated thick-walled vessels; small, round, uniform epithelioid cells, often with punched-out nuclei and sharply defined cytoplasmic borders; and small, capillary-sized vessels, surrounded by glomus cells [2]. The WHO classification for malignant GTs only considers histological findings [6], but Folpe et al. have also proposed the following criteria: deep location, size greater than 2 cm, atypical mitosis or high mitotic activity (5 mitoses/50 HPF) with moderate-to-high nuclear grade [5]. The diagnosis is confirmed by immunohistochemistry showing cell staining positive for smooth muscle actin and vimentin and negative for chromogranin. Other markers such as desmin, c-kit, CD34, S-100, chromogranin A, synaptophysin and CD56 should also be tested [2, 3].
A literature search for English-language articles on similar cases revealed approximately 70 patients treated laparoscopically [1]. Current treatment includes complete resection of the lesion with a negative margin, as malignant transformation is possible even though most GTs are benign [1, 2, 5].
The dimensions and the mitotic index (Ki-67 of 10%) of the tumour in our patient suggested that it had uncertain malignant potential, so extended follow-up was instituted. GGTs are extremely rare and difficult to diagnose before excision. Comprehensive guidelines, and data on stage, treatment, and follow-up are lacking due to the low number of reported cases. Consequently, it is important that physicians consider this disease even though most GTs have a favourable prognosis and a mild disease course.