Secondary bacterial pneumonia infection is frequent in COVID-19 patients. Nocardia are responsible for opportunistic pulmonary infections especially after steroid treatment. We describe a case of pulmonary nocardiosis following critical COVID-19 pneumonia in an 83-year-old male. Two weeks after initiation of dexamethasone 6 mg/L, the patient developed a new episode of acute dyspnea. The sputum cultures identified Nocardia cyriacigeorgica. In spite of intravenous imipenem and cotrimoxazole treatment the patient died. Physicians should be aware of the possibility of nocardiosis in case of deterioration of respiratory status of severe COVID-19 inpatients and perform Nocardia evaluation. This evaluation requires prolonged culture.

Nocardia are gram-positive bacilli responsible for pulmonary infections. They affect predominantly immunosuppressed patients with deficient cell-mediated immunity, especially patients having had solid organ transplantation (SOT). Patients affected by solid or hematologic malignancy or patients under immunosuppressive therapeutics such as steroids are also frequently affected. COVID-19 is a polymorphic disease that mainly affects the respiratory tract. Occurrence of secondary bacterial pneumonia infections in COVID-19 has been estimated to be around 16% with gram-negative bacteria (Pseudomonas aeruginosa, Klebsiella pneumoniae, Escherichia coli, Stenotrophomonas maltophilia among others) or with gram-positive bacteria (mainly Staphylococcus aureus), less frequently (6%) with fungi (Aspergillus spp or Fusarium spp), and rarely with other opportunistic pathogens such as Pneumocystis jirovecii [1]. Despite extensive use of steroids and other immunosuppressive drugs in COVID-19 treatment, four cases of nocardiosis during COVID-19 have been reported [2-5], of which two cases were suspected to be present before COVID-19 infection. We describe a case of pulmonary nocardiosis following critical COVID-19 pneumonia in an 83-year-old male suffering from COVID-19.

An 83-year-old HIV-negative male was hospitalized for deterioration of his general state and oxygen desaturation. Upon admission, a SARS-CoV-2 PCR test performed in the emergency ward yielded a positive result. He had a medical history of chronic obstructive pulmonary disease (COPD) with bullous emphysema, noninsulin diabetes, and Crohn’s disease treated by mesalazine. He reported deterioration of his general state with loss of appetite for more than a week prior to admission. Baseline hematology evaluation results were as follows: leukocytes, 6870/mm3; polynuclear neutrophils, 5320/mm3; lymphocytes, 730/m3; LDH, 345 UI/L; C-reactive protein (CRP), 142 mg/L; and procalcitonin, 0.31 µg/L. A CT scan showed COVID 19 pneumonia with 25% of the pulmonary parenchyma affected, and major bullous emphysema mostly at the top of the lungs. The patient was treated with high-flow canula (HFCN), dexamethsone 6 mg/day, enoxaparin 4000 UI, and cefotaxime and spiramycine. The course was favorable at first and the treatment was switched to conventional oxygen therapy and diminution of CRP on day 5 (12 mg/L). However, on day 4, the patient complained about a productive cough and a sputum culture was performed. On day 13 after admission, he developed a new episode of acute dyspnea and fever with an increase in CRP level (177 mg/L, then 428 mg/L two days later). A new CT scan (day 13) revealed dense consolidation with air bronchograms in the lower lobes of each lung (Fig. 1). The sputum culture from day 4 showed colonies with features of Nocardia species. Further analysis using mass spectrometry (MALDI-TOF, Vitek MS Plus, bioMérieux) and genotypic characterization with 16S rRNA gene sequencing confirmed the presence of Nocardia cyriacigeorgica (Fig. 2). Nocardia was found a second time in a sputum culture on day 13. Cerebral MRI did not reveal cerebral nocardiosis. Intravenous imipenem (750 mg ×3/d) and amikacine were introduced immediately and replaced with imipenem (1000 mg ×4/d) and cotrimoxazole (800 mg ×4/d for a week then 800 mg ×3/d), but the patient’s status worsened, and HFNC was needed again. However, the patient’s clinical status worsened and he eventually died one month after his admission. 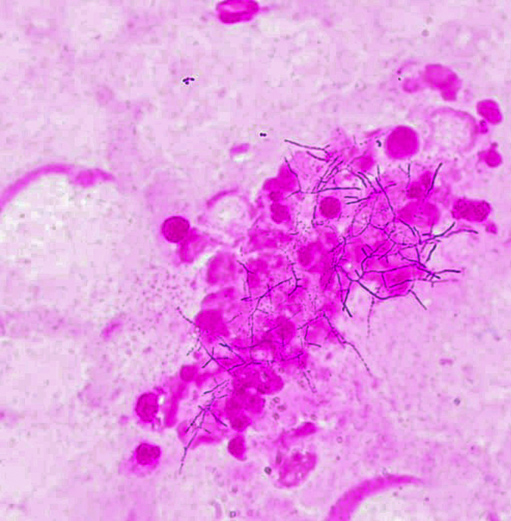 We report a case of pulmonary nocardiosis following diagnosis of severe COVID-19. Nocardia spp are thin, gram-positive bacilli widely found in the environment. Contamination results mainly from inhalation or occasionally from skin or eye trauma. The most frequent organs affected are the lungs, resulting in chronic pneumonia or less frequently acute or subacute pneumonia. Extra-pulmonary localization is occasionally found in 20% of cases, especially in the central nervous system.
There are more than 109 species of Nocardia spp including 54 human pathogens [6]. Nocardia cyriacigeorgica, first described in 2001, accounts for 25% of nocardioses. N. cyariacigerogica infection has been reported in patients with pulmonary diseases: COPD especially under glucocorticoid treatment, nontuberculous mycobacterial pulmonary disease, allergic bronchopulmonary aspergillosis, bronchiectasis or pulmonary sequestration.
Only four other reports of nocardiosis associated with COVID-19 have been reported to date. The first case occurred in a 63-year-old man who presented with dyspnea several days after severe COVID-19 treated using dexamethasone and remdesivir [2]. In this case, pulmonary and neurological nocardiosis was diagnosed but due to preexisting lesions, the nocardiosis was thought to be present prior to the SARS-CoV-2 infection. The second case occurred in a 45-year-old woman with a concomitant diagnosis of COVID-19, nocardiosis, and untreated AIDS [3]. In our case, nocardiosis was not present upon admission although preexistent colonization of the respiratory tract could not be ruled out. Arif et al. described the occurrence of a 61-year-old patient hospitalized for COVID-19 who developed a previously unknown nocardiosis at the end of a 10-day course of dexamethasone [4]. The fourth and last case was the fatal case of a 16 years old patient with cystic fibrosis and necrotizing pneumonia due to Nocardia farcinia diagnosed a few days after hospitalization for COVID-19. The patient was treated with antibiotherapy and dexamethasone[5].
Nocardiosis is more frequent in males over 50 years. An immunosuppressed condition is found in most cases as well as pulmonary diseases such as COPD, alveolar proteinosis, and asthma or sarcoidosis [6, 7]. Thus, Nocardia is most frequently an opportunistic infection, and widespread use of steroids in COVID 19 in conjunction with lung damage could be favorable factors. This is a similar condition to such as COVID 19-associated pulmonary aspergillosis (CAPA). In our case, the nocardiosis onset was acute but the presentation of opportunistic infection during COVID-19 can differ from the classical presentation, as reported in CAPA cases.
Microbiology-based diagnosis is based on isolation mainly from respiratory samples (such as broncho-alveolar lavage or sputum). Microbiologists should be informed about of the possible presence of Nocardia in case of SARS-CoV-2 secondary infection, because prolonged culture for up to 3 weeks is required for identification although colonies may appear after two days [7].

Physicians should be aware of the risk of secondary nocardiosis especially in cases of severe COVID-19, and they should prescribe relevant bacteriological examinations in case of secondary deterioration of respiratory status among COVID-19 patients, especially when secondary infection is suspected.