Intravesical bacillus Calmette-Guérin (BCG) instillation is widely used for the treatment of superficial bladder cancer. BCGitis is a serious immune-mediated complication with systematic manifestations and a high mortality rate. Here, we describe a case of a 64-year-old male patient who presented with haemophagocytic lymphohistiocytosis syndrome (HLH) after BCG instillation and was effectively treated with high-dose dexamethasone, intravenous immunoglobulins and anti-tuberculosis treatment.

Intravesical bacillus Calmette-Guérin (BCG) instillation is still considered a first-line treatment for superficial non-muscle invasive bladder cancer (NMIBC). The BCG mechanism of action as an immunotherapeutic agent is not fully elucidated, though it is thought that it activates local immune response leading to the death of tumour cells, with high efficacy and good tolerance [1]. Adverse reactions are not rare, but tend to be local and usually self-limiting, concerning fever, malaise and bladder irritation due to cystitis [2]. Serious adverse reactions with systemic symptoms – a condition that is often called BCGitis–are far less common, accounting for less than 5% of all cases. Secondary haemophagocytic lymphohistiocytosis (HLH) syndrome after BCG instillation is a very rare clinical entity, with only a few cases being presented in the literature up to this day, to the authors’ knowledge.

We report a case of a 64-year-old male patient, with a history of left nephrectomy due to lithiasis, chronic kidney disease (baseline serum creatinine levels: 1.7 mg/dl) and in situ papillary urothelial carcinoma (2017) treated with transurethral resections and six BCG instillations in 2019. He presented to our emergency department with a fever up to 39°C, with concomitant shudder and mild dysuria symptoms, a few hours after the last intravesical instillation of bacillus Calmette-Guérin (BCG), fifteen days prior. He was receiving ciprofloxacin for the previous two days, without remission of his symptoms.
On admission he was oriented, febrile (38.5°C), normotensive, with sinus tachycardia (115 bpm) and normal pulse oximetry (SpO2:98%). He also showed a petechiae non-palpable rash on both legs, and his liver was mildly enlarged. Laboratory tests revealed neutropenia (neutrophils: 1,000 K/μL) and severe thrombocytopenia (platelets: 8 Κ/μL); normal haemoglobin levels; acute kidney injury (urea:59 mg/dL, serum creatinine:2.01 mg/dL); abnormal liver function tests (AST:177U/L, ALT:94U/L, ALP:201U/L, GGT:380U/L);high LDH levels (604U/L), triglycerides (282 mg/dl) and d-dimers (5.5 μg/ml). There were also significantly elevated inflammation markers (CRP: 229 mg/L, ferritin: 5,596 ng/ml), with normal erythrocyte sedimentation rate (12 mm/hr) and coagulation tests (PT and PTT).Serologic tests were negative for hepatitis B, C, HIV, parvovirus B19, EBV and CMV viruses, as well as for Leishmania and Brucella. Multiple urine and blood cultures with specific cultures for mycobacteria were sterile. Serum complement levels, serum immunoglobulins, antinuclear and antineutrophil cytoplasmic autoantibodies were also negative. A peripheral blood smear was evaluated suggesting platelets with characteristics of peripheral consumption. The chest radiography was normal, and the abdomen ultrasound revealed an enlarged liver (23 cm) and spleen (16.8 cm). Whole-body computed tomography (CT) also revealed hepatomegaly and splenomegaly, without focal lesions or lymphadenopathy and emphysematous lesions in the right upper lobe.
The patient was immediately treated with broad-spectrum antibiotics (piperacillin-tazobactam and amikacin) and empiric anti-tuberculosis treatment with isoniazid 300 mg, rifampicin 600 mg and ethambutol 1,200 mg three times weekly, and levofloxacin 750 mg. Immune thrombocytopenic purpura (ITP) was also considered due to the peripheral blood smear analysis, so the patient also received prednisone 1 mg/kg and intravenous immunoglobulin (IVIG) 400 mg/kg/day for five days, without clinical or laboratory improvement. The patient remained febrile in the sixth day with a further decrease in neutrophils, platelets and haemoglobin levels. Antibiotic treatment was upgraded to meropenem, but the patient showed no signs of improvement, and as a result it was discontinued three days later. Haemophagocytic lymphohistiocytosis (HLH) was suspected due to cytopenia, organomegaly, high ferritin and triglycerides levels and persistent fever above 38.5°C. The patient underwent bone marrow aspiration, which confirmed the diagnosis showing marked phagocytosis of platelets by histiocytes (Fig. 1). Bone marrow PCR for TBC, Ziehl–Neelsen stain and TBC cultures all came back negative. Unfortunately, we were not able to measure NKcell activity and soluble IL-2 receptor levels. Dexamethasone 10 mg/m2 was immediately started and the patient showed gradual clinical and laboratory improvement. Etoposide was not administered because of the abnormal liver and kidney biochemistry, and the severe cytopenia the patient suffered. Finally, a liver biopsy was performed, showing multiple parenchymal non-necroticising granulomas, composed of epithelioid histiocytes (Fig. 2) and Ziehl–Neelsen histochemical staining revealed a small number of acid-fast bacilli (Fig. 3). 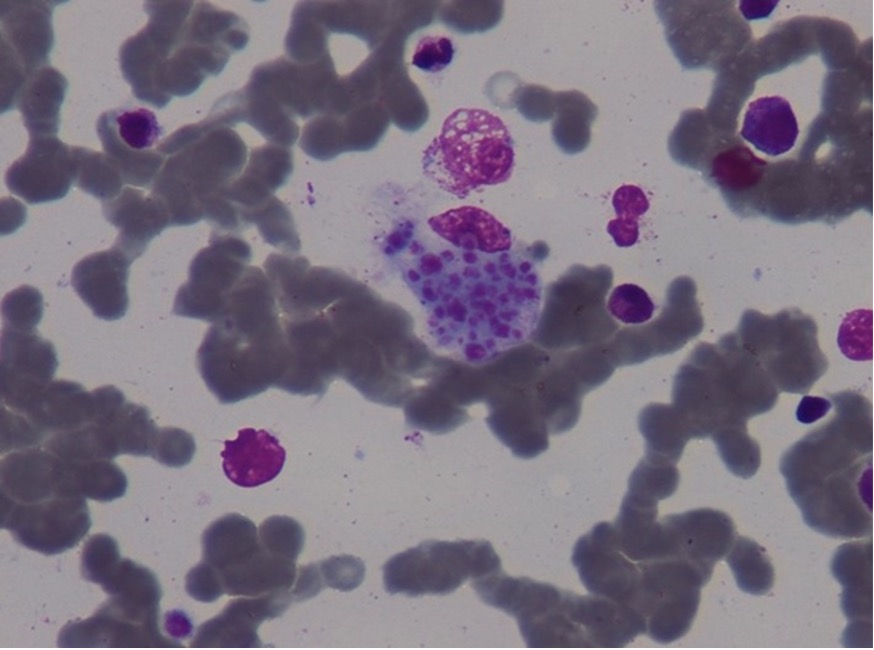 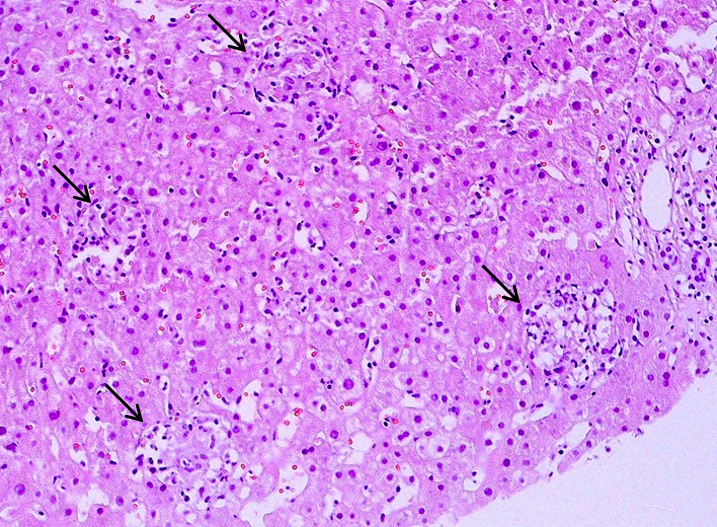 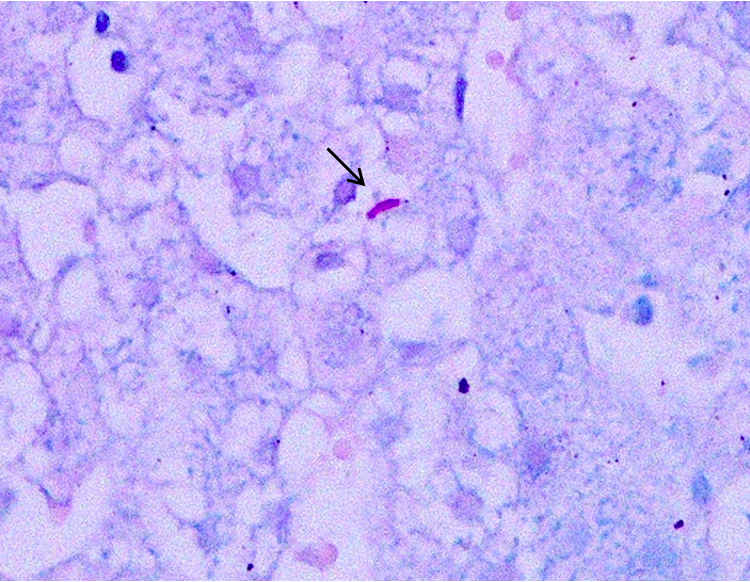 Since intravesical use of BCG was first described for the treatment of superficial non-muscle invasive bladder cancer, it has been widely used by urologists with significant efficacy and good tolerance [3]. In a large cohort study of 6,753 patients, the incidence of BCGitis was 1% with a median time of 169.5 days from BCG instillation to symptoms [4]. In a review analysis of 2,602 patients, the most common systemic complication was fever (2.9%), while sepsis (0.4%) and cytopenia (0.1%) were the least frequent [5]. Definite diagnosis of BCGitis may be challenging, as the sensitivity of acid-fast staining, mycobacterial culture and molecular testing are low: 25.3%, 40.9% and 41.8% respectively[6]. Symptoms may not only be attributed to M. bovis dissemination, but also to an excessive autoimmune/hypersensitivity reaction. Prompt therapy with anti-tuberculosis treatment in addition to corticosteroids should always be started with the clinical suspicion of BCGitis, as mortality of patients with disseminated BCG infection was 9.9%, while 7.4% suffered long-term complications [6].
Haemophagocytic lymphohistiocytosis (HLH), an hyperinflammatory syndrome of excessive macrophages activation and tissue inflammation and destruction, may be inherited in an autosomal recessive form, presented usually in children.It may alsobe secondary to other conditions, such as haematologic malignancies, autoimmune disorders or infections. Tuberculosis-associated HLH syndrome (TB-HLH) is well known in literature and several cases have been described with poor prognosis and high mortality rates, up to 50% [7]. Haemophagocytosis, the presence of red blood cells, platelets or white blood cells within the cytoplasm of macrophages, is what characterises the disease, but is neither pathognomonic nor required for the diagnosis.
Up to the time of writing, only three cases of HLH syndrome after intravesical BCG instillation have been described in the literature. The first case described by Misra et al. presented a 70-year-old patient who was effectively treated with high-dose methylprednisolone (2.5mg/kg/day) and intravenous immunoglobulins (300 mg/kg/day for five days), in addition to the anti-tuberculosis treatment (rifampicin/isoniazid/ethambutol) [8]. Schleinitz et al. presented a case of a 49-year-old man who presented with HLH one month after the BCG instillation [9]. Except for the use of anti-TB treatment (isoniazid, rifampin, ethambutol, pyrazinamide), high-dose prednisone (1 mg/kg/day) and IVIG (400 mg/kg/day for four days), the authors proposed the use of vinblastine weekly. In the third case, reported by Thevenot et al., the patient presented a few hours after the last BCG instillation with systemic symptoms. He had developed granulomatous hepatitis and HLH syndrome, and fully recovered with double anti-TB treatment (isoniazid and rifampicin), high-dose methylprednisolone (2 mg/kg/day) and IVIG (400 mg/kg/day for five days) [10].

In conclusion, we emphasise the importance of prompt diagnosis and adequate treatment of tuberculosis-associated HLH syndrome, due to its high mortality rate. Strong clinical suspicion is essential in reducing the morbidity and mortality rates of this rare clinical entity.