Colorectal cancer (CRC) is the third most common cancer and the fourth most common cause of cancer-related death in the USA. Primary signet ring cell carcinoma (SRCC) of the colon and rectum is extremely rare with a reported incidence of less than 1%. Here we present the case of a 41-year-old man who presented with abdominal pain, severe microcytic anaemia and a negative faecal occult blood test (FOBT). A CT scan of the abdomen revealed thickening of the terminal ileum and proximal right colon with extensive lymphadenopathy and a fistula tract extending from the terminal ileum to the right buttock. Endoscopic features like cobblestoning of the ileocolic junction along with elevated blood and stool inflammatory markers raised suspicion of Crohn’s disease (CD). However, histopathological study surprisingly revealed primary colorectal signet cell carcinoma (PCRSCC) with no evidence of CD. Cases of simultaneous PCRSCC and CD have been reported, but no clear association has been established. Our case is unique in that it presented with classic clinical features of CD, but PCRSCC without any histological evidence of underlying CD was found on histology.

Over 90% of colorectal carcinomas (CRC) are adenocarcinomas that originate from colonic mucosal epithelial cells[1]. Three major pathogenic mechanisms leading to CRC include chromosomal instability, microsatellite instability, and CpG island methylator phenotype [1]. Signet ring cell carcinoma is a rare, highly aggressive adenocarcinoma that produces mucin and is characterised histologically by cells that have excess mucin production in the cytoplasm with peripheral displacement of the nucleus resembling a signet ring (Fig. 1). Primary colorectal signet ring cell carcinoma (PCSRCC) is most commonly found in the glandular cells of the stomach and less frequently in the breast, gallbladder, urinary bladder and pancreas [2]. PCRSCC constitutes less than 1% of all CRC cases [3]. PCRSCC diffusely infiltrates the bowel wall, resulting in thickening of the colon. It is most commonly seen in men around 50 years of age and has a poor prognosis with a 5-year survival rate of between 9% and 36%, mainly due to delayed symptom presentation and diagnosis [3]. 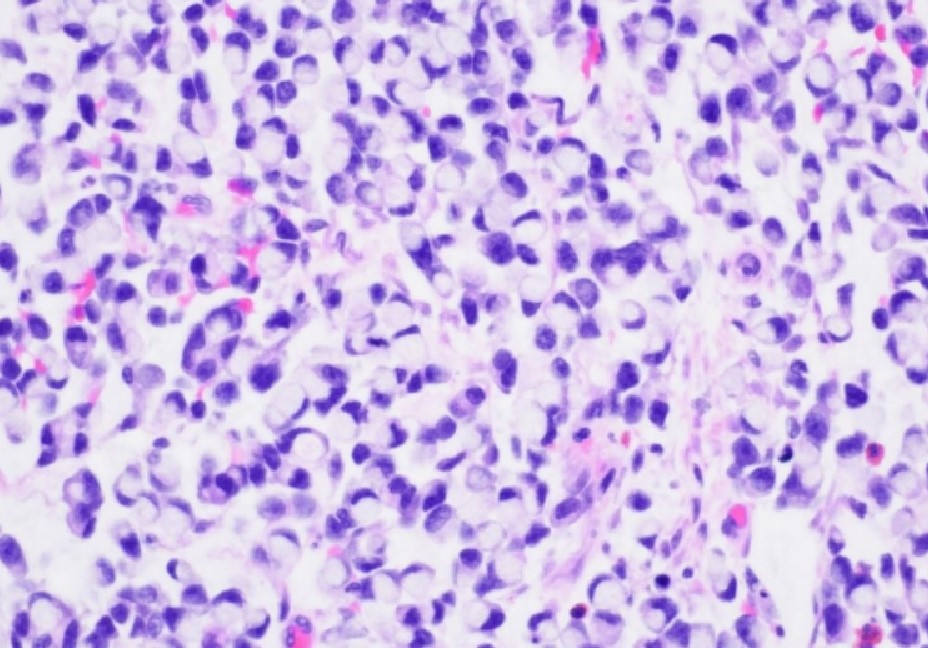 PCRSCC was detected in stage 3 or 4 in over 70% of patients [3]. It predominantly affects the right colon and rectum, often metastasizing to the lymph nodes and peritoneum [3]. A recent study showed that PCRSCC in the proximal colon and rectum had a worse prognosis than that in the distal colon [4].

A 41-year-old man with no past medical history or significant family history was evaluated for mild intermittent right lower quadrant (RLQ) abdominal pain for 6 months. He mentioned having regular bowel movements without haematochezia or melena. He reported a 20-pound weight loss over the past 6 months. Physical examination revealed mild conjunctival pallor and clubbing of fingernails. Abdominal examination revealed mild RLQ tenderness and normal bowel sounds. Laboratory work revealed severe microcytic anaemia with a haemoglobin level of 5.4 g/dl and MCV 52 fl, mildly elevated CRP at 22.84 mg/l, elevated faecal calprotectin (259), mildly elevated CEA (3.4). cANCA, pANCA, CA 19-9, stool WBC and stool cultures were within normal limits. An iron panel revealed low ferritin (1.1) and iron saturation (<10). Faecal occult blood testing was negative on two occasions during this hospitalisation. A CT scan of the abdomen with contrast revealed thickening of the terminal ileum and proximal right colon with pericolic fat stranding, extensive surrounding paracolic and mesenteric lymphadenopathy, and a fistula tract extending from the terminal ileum to the right buttock. Luminal evaluation with colonoscopy revealed friable mucosa with a cobblestone appearance and confirmed the presence of a fistula tract originating from the ileum (Fig. 2). Intestinal tuberculosis was ruled out by a negative QuantiFERON test, and no acid-fast bacilli were detected on microscopy. Tissue biopsy of the bowel specimen and lymph nodes both revealed primary signet cell carcinoma of the terminal ileum and proximal colon with lymphovascular and perineural invasion. The cancer was staged as T4bN2b. Oesophagogastroduodenoscopy of the stomach with biopsy ruled out a primary stomach source. No histological features suggestive of Crohn’s disease (CD) were seen on the biopsy specimen (Fig. 3). The patient underwent hemicolectomy with mesenteric and paracolic lymph node resection. Genetic testing revealed the patient was positive for k-RAS wild type and PTEN. The tumour was MSI stable and MMR proficient. NTRK, BRAF, TNB, HER-2, PIK3 and PDL were negative. The patient has currently received six cycles of chemotherapy with FOLFOX on an outpatient basis. 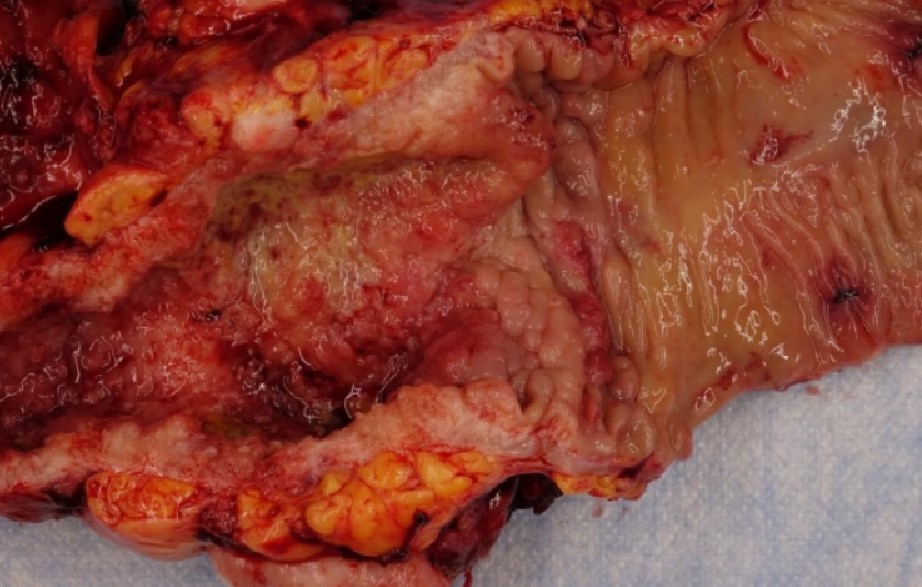 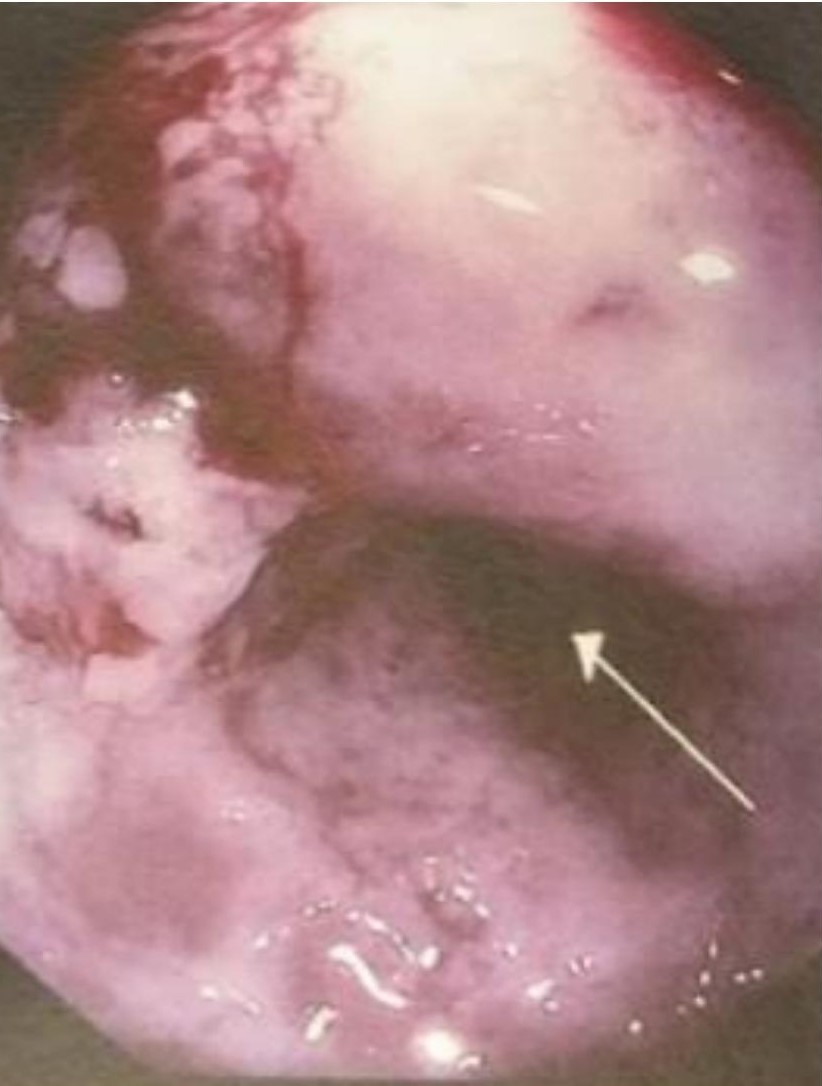 PCRSCC is a rare type of primary CRC that is mainly seen in the middle-aged male population, although cases have been reported in the young and elderly populations. Our patient had some features that are seen with this rare tumour, such as age at presentation, male sex, tumour location on the right side at the ileocolic junction, vague abdominal symptoms, and late presentation when the tumour had metastasized to the local lymph nodes. However, our case presented certain unique features of this rare cancer. To our knowledge, this is the first case of PCRSCC associated with a fistula tract in the absence of histological evidence of CD. The clinical presentation, laboratory data including elevated CRP and positive faecal calprotectin, imaging features with inflammation of the ileocolic region, and endoscopic features like cobblestoning of intestinal mucosa in the ileocecal region with a fistula tract, were suggestive of CD, but the patient had no histological evidence of CD. A few cases of PCRSCC with CD have been reported but no clear association has been established [5]. We question if SRCC may have inflammatory properties that may have resulted in elevated inflammatory markers, positive faecal calprotectin, and fistula in our patient. We encourage further studies to establish the association between SRCC and inflammatory bowel disease.