Introduction: Giant basal cell carcinomas (GBCCs) are extremely rare and typically more aggressive than their predecessor subtype. GBCCs with mushroom-like morphology have rarely been reported, with only one other case identified in the literature. Here we present a unique case of a neglected giant mushroom-like BCC that was treated successfully.
Case description: An 81-year-old male patient presented with a large ulcerative mass on his back. He had a medical history of chronic heart failure and atrial fibrillation, which were controlled with heart medication. During a routine visit to change the dressing of the lesion, the central pedunculated stalk underwent spontaneous haemorrhaging which led to massive blood loss. The patient was treated for shock and the lesion was completely excised under emergency surgery. The tumour was sent for histopathological assessment after complete surgical removal. Recovery was successful with good postoperative results and no recurrence was reported in the 12 months following discharge. Discussion: The patient was under long-standing anticoagulant therapy that contributed to the untimely rupture of the pedunculated lesion and led to spontaneous heavy haemorrhaging. Treatment for such giant lesions can be complex, especially in patients with co-morbid conditions. Careful assessment and early treatment are paramount for successful results.
Conclusion: Complete removal of such lesions is very successful for treating GBCCs.

Basal cell carcinomas (BCCs) manifest as any other tumour lesions of basal epithelial origin and are typically considered indolent, slowly progressing and relatively benign tumours [1]. In contrast, giant BCCs (GBCCs), classified as greater than 5 cm in diameter, are considered more aggressive in behaviour, with local tissue invasion as well as metastasis and a poor prognosis [1]. GBCCs also have a higher mitotic rate and increased perineural invasion compared with conventional BCCs [1]. The risk of developing such giant tumours with atypical features (compared to the usual BCC) is unknown, but many such cases are associated with patient neglect, low socioeconomic status and immunosuppression [1, 2]. Nevertheless, exophytic, mushroom-like GBCCs have rarely been reported in the literature with just one case observed [3]. However, other exophytic tumours including soft fibromas and SCCs have been described [2–4]. Differentiation between such tumours is imperative due to the risk of metastasis and for implementation of a better management protocol.

An 81-year-old man presented to our polyclinic with a 15-year history of a non-healing ulcerative mass on his back (Fig. 1). The mass was described as slowly progressing in size over the years and with several minor episodes of haemorrhaging. He was previously diagnosed with arterial hypertension with chronic atrial fibrillation and heart failure with acute exacerbation in 2012, decompensation and tachyarrhythmia. His treatment consists of amlodipine/lisinopril 10 mg/5 mg, torsemide 5 mg, bisoprolol fumarate 5 mg and acenocoumarol 4 mg. He admitted to refusing treatment on multiple occasions several years previously, and only decided to seek treatment after noticing more bleeding and foul-smelling discharge within the last 6 months. The patient has Fitzpatrick skin type II and had no recollection of previous intense sun exposure. No other significant medical history was reported, he had no drug allergies and no family history of cancer.
A dermatological examination identified a 10.5×15.5 cm exophytic ulcerative mass with a broad base in the region of the right scapula with purulent, foul-smelling exudate (Fig. 1). The lesion appeared pedunculated and mushroom-like with a pigmented cutaneous surface and rolled borders of large lobulated necrotic tissue. The central core appeared fresh, pink, soft and pulsating on palpation. A clear and serosanguineous discharge was also evident. A complete laboratory work-up including haematological, infectious and serological testing was conducted and was unremarkable, including PT, PTT and INR which were normal. 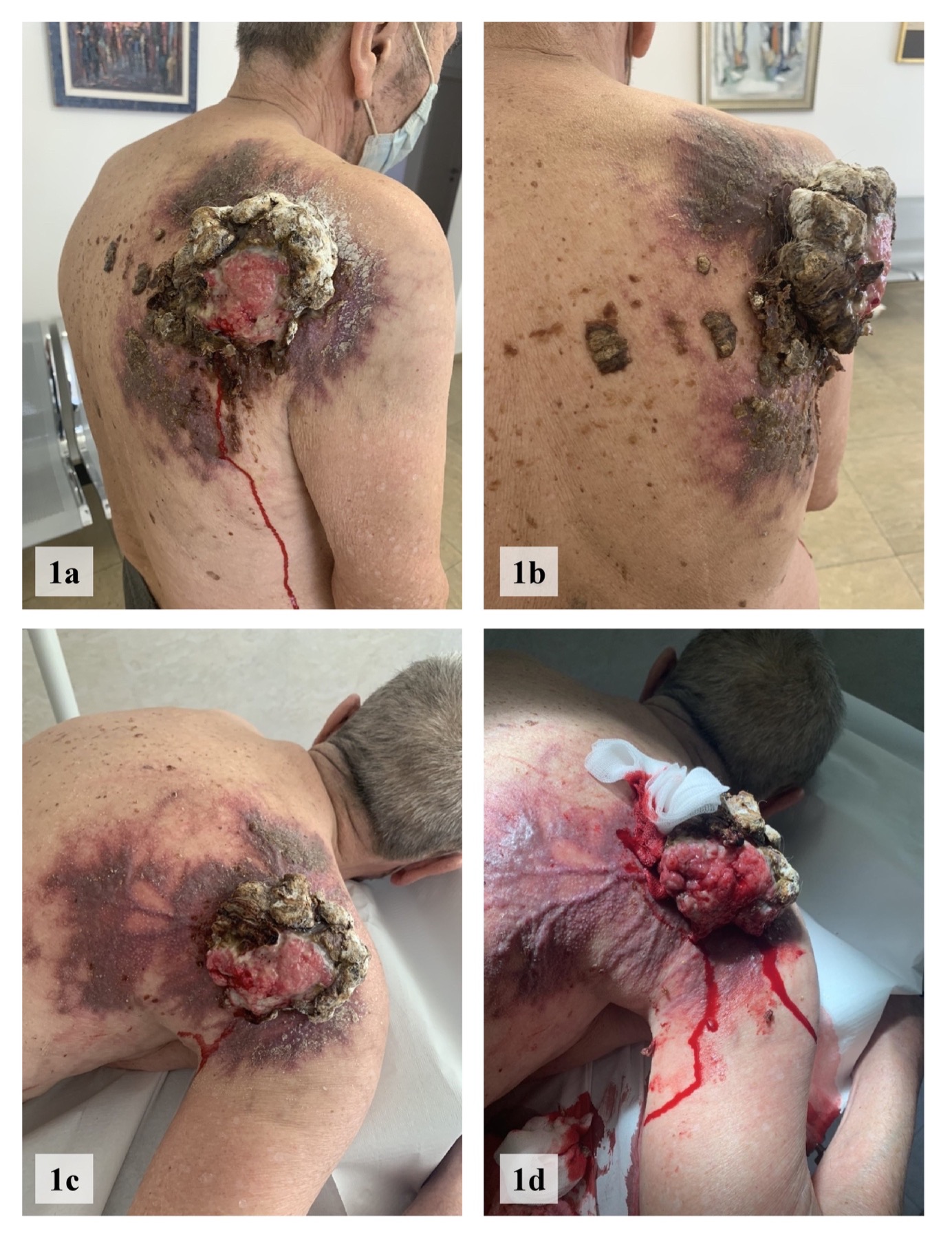 Figure 1. (a–d) Clinical pictures of the patient with a giant mushroom-like basal cell carcinoma in the right scapular region. (d) Spontaneous bleeding when a dressing was applied

The patient returned to the clinic the following day so the wound dressing could be changed, which led to spontaneous haemorrhaging from the central pedunculated mass. There was massive blood loss which resulted in the patient going into haemorrhagic shock and requiring a blood transfusion, plasma and electrolyte treatment. He underwent an emergency wide local excision and removal of the tumour mass with negative surgical margins (Fig. 2a–c) with complete wound closure thereafter (Fig. 2d–f). 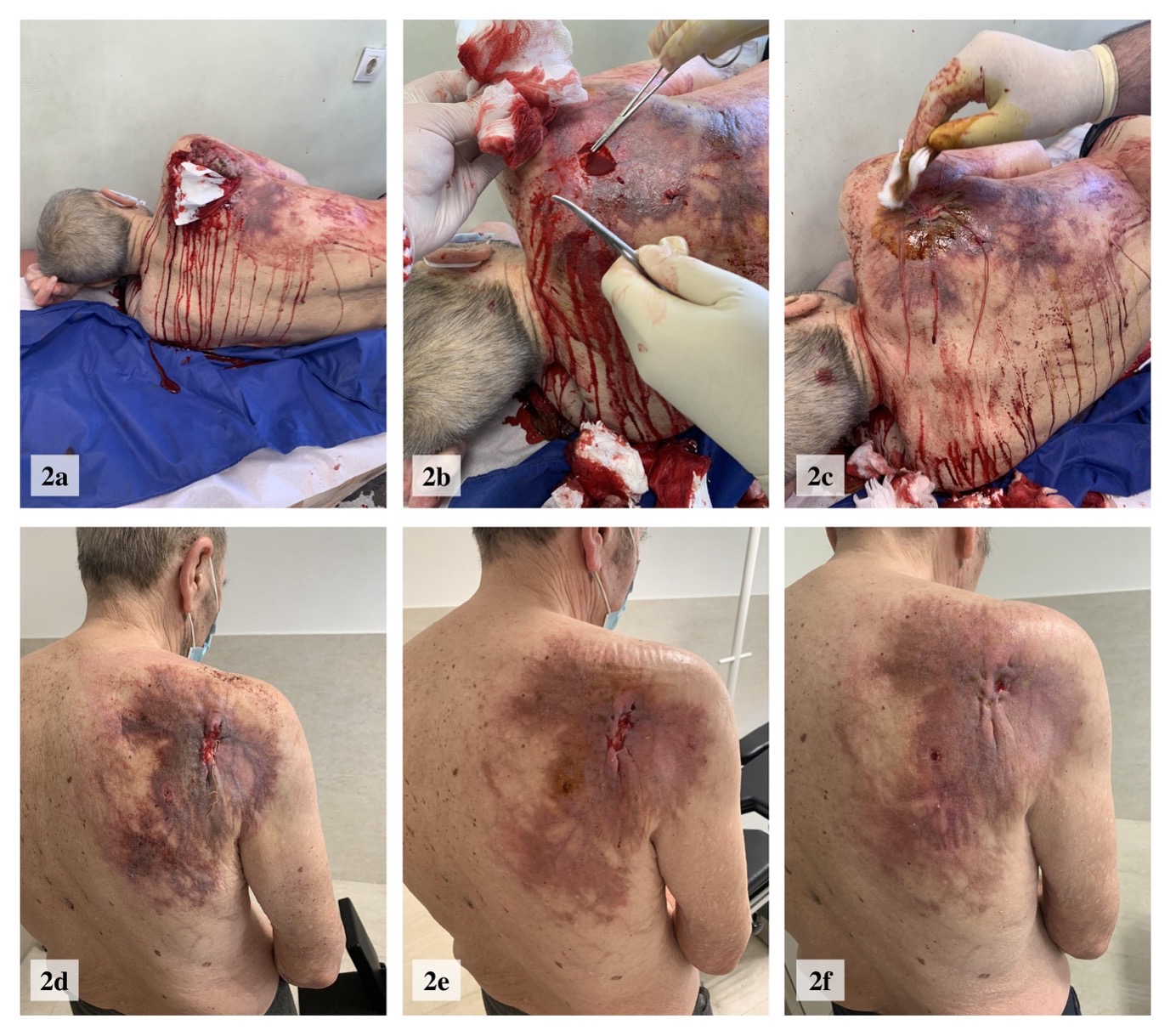 Multiple tissue samples were sent for histological examination that revealed nests of infiltrative basaloid cells penetrating the dermis that were compatible with findings of an adenoid basal cell carcinoma (BCC) (Fig. 3c–f). No metastatic spread was noted. Based on the clinicopathological findings, a diagnosis of BCC was confirmed.
Further biopsies were conducted on the neighbouring tissue that supported a further finding of haemangioma and excluded lymphangitic carcinomatosis. Imaging including X-ray and CT showed no infiltration into the adjacent bony and soft tissue structures including the thoracic cavity, which was without any abnormal deviations. Postoperative results showed positive signs of complete primary wound closure with optimal alignment of wound edges (Fig. 2d–f). A bimonthly follow-up was conducted with progressive signs of excellent aesthetic results and no further complications or signs of recurrence of the tumour mass were reported in the 12 months following discharge (Fig. 3a,b). 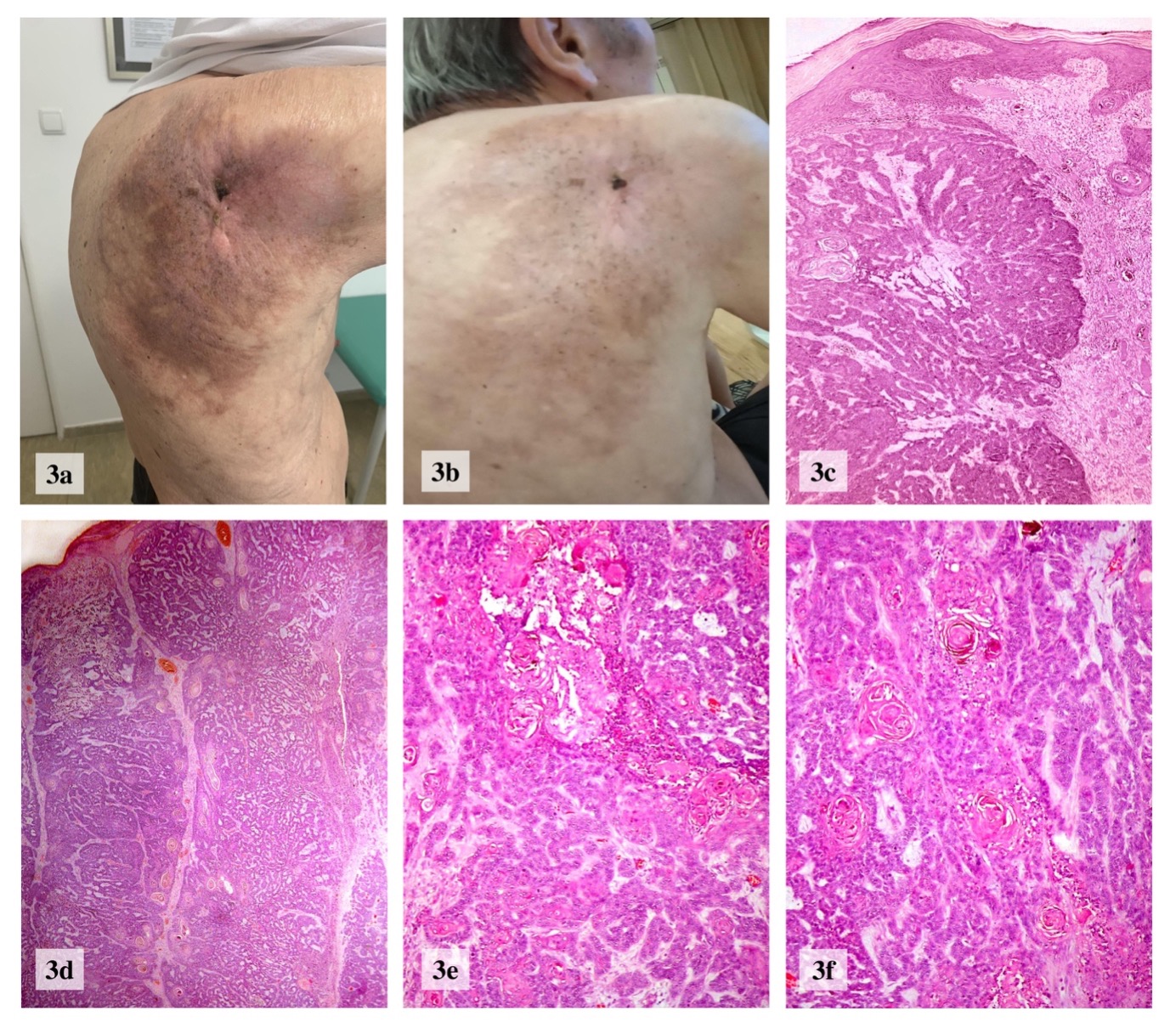 There are no clear guidelines on the preferred method of treating large, progressive and neglected tumours such as GBCCs [4]. Although complete surgical excision offers the best treatment outcome, it can be challenging due to tumour size and very often is impossible without functional or cosmetic mutilation [5]. Excessive haemorrhaging can also pose a major threat in such procedures, especially in patients taking antithrombotic medications. Studies have long suggested that discontinuation of antithrombotic therapy, including the use of low-dose heparin bridging therapy for patients with atrial fibrillation, is associated with a higher risk of major bleeding or thromboembolic event[6,7]. This is particularly due to the physiological and pharmacological effects of these drugs on their respective targets that can potentiate a change in either the hyper- or hypo-coagulable state several days after the drug has been stopped [8]. As a result, there is an increased risk of a thromboembolic event or major haemorrhaging.
In our case, the patient was on long-standing anticoagulant therapy that could lead to spontaneous rupture of the pedunculated mass. This could have serious life-threatening implications particularly if such an incident were to occur during the night when the patient was asleep. Accidental movement or pressure to the area could lead to inevitable rupture of the vasculature. Such patients require special attention when undergoing cutaneous surgery and immediate treatment should be considered. During surgical intervention, the tumour mass and nearby vascular structures should be manipulated carefully to avoid further bleeding and risk to the patient.
From the anamnestic and clinical data, it is evident that the tumour was slow growing in nature, with no change in growth pattern, thereby suggesting the giant mushroom-like BCC was the result of negligence in seeking early medical intervention. The combination of chronic negligence and increased likelihood of haemorrhage for many years poses a serious risk. Without clear and early aggressive treatment, the likelihood of a fatal outcome is increased and clinicians should carefully inform the patient of the possibility of a poor outcome.

Complete surgical removal of the tumour has shown the most promising results in treating GBCCs, with 100% success rates thus far, and should be considered the primary treatment for such cases [2–5].
A unique case of a giant mushroom-like BCC in full remission after complete excision and closure has been described. BCCs tend to be slow-growing and painless tumours, which may allow patients to ignore signs and defer immediate treatment. The result is a neglected BCC can become a large fungating mass with an increased risk of metastasis, as seen in our case.