A 74-year-old patient anticoagulated with rivaroxaban for chronic atrial fibrillation presented to the emergency department with acute lumbar pain with progressive weakness of the lower limbs and inability to stand up. No previous trauma was reported. Neurological examination was consistent with a complete spinal cord syndrome at the level of T6. Magnetic resonance imaging showed the presence of spinal cord compression associated with signs of extensive intramedullary inflammation secondary to a haematoma. The patient underwent thoracic laminectomy with evacuation of an intradural haematoma. No intraoperative complications were described, but no clinical improvement had been achieved 15 days after the surgical intervention.

Direct oral anticoagulants (DOACs) are currently the first-line treatment in two clinical conditions: the prevention of stroke and systemic embolism in patients with non-valvular atrial fibrillation (NVAF), and the treatment/prevention of venous thromboembolism [1]. DOAC dosage is based on evaluation of the clinical indication, age, sex, body weight, concomitant administration of other drugs, and renal and liver function. Bleeding is the most frequent complication of anticoagulant therapy, while other complications such as allergic reactions, thrombocytopenia, skin necrosis, purple toes or alopecia are rare [2]. Major bleeding complications may also occur in patients treated with DOACs, accounting for 3–4% of bleeds per patient-year [3].

A 74-year-old patient, anti-coagulated with rivaroxaban for chronic atrial fibrillation, presented during the night at about 4:00 a.m. to the emergency department complaining of acute lumbar pain with progressive weakness of the lower limbs and inability to stand up. The patient had no history of fever, chills or weight loss but reported progressive shortness of breath during the 48 hours prior to hospital admission. Her past medical history was significant for chronic atrial fibrillation previously treated with vitamin K antagonist and switched to rivaroxaban 20 mg daily 5 days before hospital admission, atorvastatin 10 mg daily, furosemide 40 mg daily, spironolactone 25 mg daily and bisoprolol 5 mg twice daily. There were no newly introduced medications. Her family history was non-contributory. She had no known drug or food allergies, as well as no history of smoking, alcohol abuse or illicit drug use. No recent trauma or exertion was reported.
On physical examination, her heart rate was 95 beats/min, blood pressure was 148/102 mmHg, respiratory rate was 15 breaths/min, and oxygen saturation was 98% on room air. The patient was alert and oriented to time, place and person. A complete spinal cord syndrome at level T6 was found. Dorsolumbar spinal pain centred around the thoracolumbar hinge, with no sensory-motor deficit of the upper extremities, complete flaccid paraplegia (0/5), T6 territory hypoesthesia with tuning fork apallesthesia extending to the sternum, and anal atony with hollowness and presence of stool at rectal touch. Reflexes were not perceived in the lower limbs, The Babinski sign was present, and no epileptoid tremor was found. Heart sounds were irregular without any rubs or murmurs. The lungs were clear. The abdomen was tender and non-distended, without masses.
Blood tests showed leucocytosis (15.5 g/l) with predominance of polynuclear neutrophils (14.2 g/l) and with normal platelet count and C-reactive protein (9.3 mg/l). Haemoglobin was 12.8 g/dl and mean corpuscular volume was 102 fl. Prothrombin time (PT) was 62%, activated partial thromboplastin time (APTT) was 30.1 (21–35 seconds), INR 1.42, fibrinogen 3.37 g/l, and anti-factor X activity 118.89 ng/ml. Liver function tests showed increased total bilirubin (27 µmol/l), levels of alanine transaminase (ALT; 166 IU/l), aspartate transaminase (AST; 179 IU/l) and alkaline phosphatase (171 IU/l), while gamma-glutamyl transferase was normal. The glomerular filtration rate (GFR) was 69 ml/min, serum creatinine 73 µmol/l, serum sodium 133 mmol/l and potassium 5.2 mmol/l. The rest of the electrolyte and thyroid function tests were within the normal range. The electrocardiogram showed atrial fibrillation with controlled ventricular response.
Magnetic resonance imaging showed a left posterolateral intracanal collection of probably epidural topography at the level of the T4-T5-T6 vertebrae that extended over 54 mm and measured 12 mm in the anteroposterior axis. It showed a discreetly heterogeneous signal in T2 and STIR hypersignal, without clear translation on the T1 sequence, and without enhancement after injection. A 4 mm pumiceous contrast image was noted opposite T6, with a linear contrast image above it that appeared to be vascular. On the axial T2-Medic sequence, hyposignals in favour of hemosiderin deposits were noted. The lesion exerted a mass effect on the medullary cord, which was displaced to the right, the site of an intramedullary STIR hypersignal extending from T3 to T7. The height of the vertebral bodies was preserved without vertebral fracture. There was no signal abnormality of the terminal cone (Fig. 1). 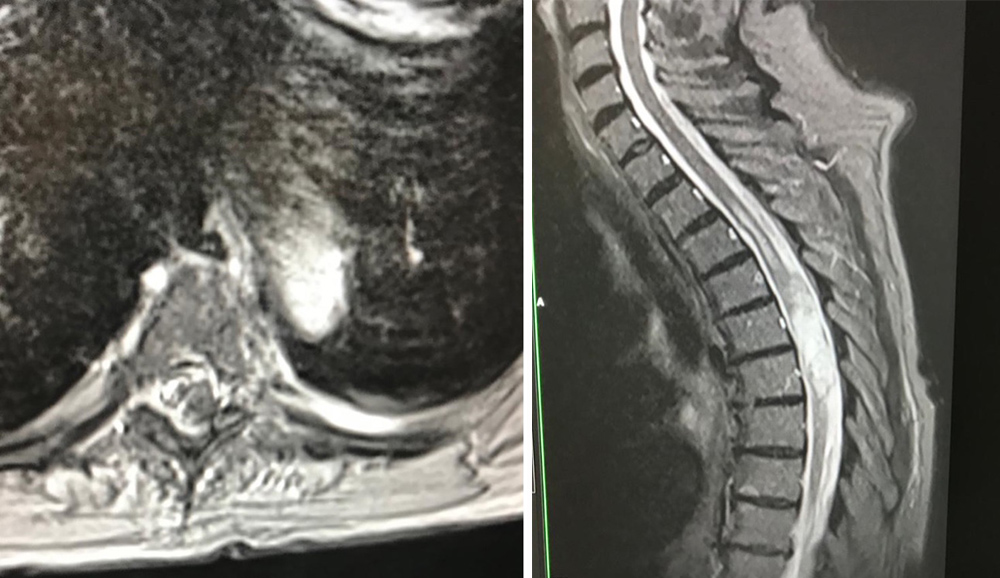 Human prothrombin complex 4000 IU was administered in the emergency department. Neurosurgeons performed a laminectomy centred on the affected thoracic vertebral levels with evacuation of an intradural haematoma at level T4-T5-T6. Haemostasis was difficult throughout the procedure but no intra- or extradural bleeding was reported at the end of the procedure.
Fifteen days after the procedure, no neurological improvement was noted.

Spontaneous spinal haematomas are rare and complex spinal pathologies leading to devastating neurological outcomes. They can be idiopathic or arise as the result of rupture of the epidural venous plexus, vascular abnormalities, arteriovenous malformation, vertebral haemangiomas, lumbar puncture, spinal manipulation, coagulopathies, or pharmacological anticoagulation [4].
Anticoagulant drugs are prescribed to treat and prevent thrombotic events. Drug levels are important as low drug levels could be insufficient to prevent coagulation activation and thrombus formation, while high drug levels may favour or cause bleeding complications. It has been reported that some patients may have a considerable risk of bleeding that is independent of anticoagulation because of various conditions such as age, comorbidities, comedications and impaired renal function. High interindividual variability in drug plasma levels has been shown with all DOACs, and an association between plasma levels and major events has been highlighted by FDA reports on DOAC phase III clinical studies [1, 5].
Rivaroxaban was prescribed in the presented case 5 days prior to hospital admission. During hospitalization, we confirmed that the anticoagulation treatment was correctly switched from vitamin K antagonist to rivaroxaban. In our case, rivaroxaban was imputed as the causative drug leading to the development of the blood collection. It has been recommended that rivaroxaban should be started after warfarin has been stopped and INR is at or below 2.5. The Rivaroxaban versus Warfarin in Nonvalvular Atrial Fibrillation (ROCKET-AF) trial (comparing rivaroxaban to warfarin for the prevention of stroke and systemic embolic events (SEE) in NVAF) found that patients with a prior history of gastrointestinal (GI) bleeding were at increased risk of major bleeding with rivaroxaban as compared with warfarin [6]. Rivaroxaban caused a significantly higher risk of haemoglobin decrease ≥2 g/dl and transfusion compared with warfarin, but critical bleeding and fatal bleeding were significantly lower in rivaroxaban-treated patients. In this study, major bleeding in patients treated with rivaroxaban was represented in order of importance by gastrointestinal, intracranial, intraparenchymal, intraventricular, subdural and subarachnoid haematoma, but no epidural haematoma was reported. In contrast to warfarin, there is no specific antidote for neutralizing the activity of DOAC [7], which makes treatment of major bleeding challenging.
Medical history and comorbidities may drive the choice of a particular DOAC. Apixaban has been suggested as a reasonable first choice either in older patients or in subjects with chronic renal failure [8]. The recently updated 2019 American Geriatrics Society Beers criteria recommend a cautious use of dabigatran and rivaroxaban in patients with AF aged ≥75 years [9].

Major bleeding complications may arise in elderly patients treated with DOAC. The DOAC should be carefully chosen following the current clinical recommendations.