Kounis syndrome (KS) is defined as acute coronary syndrome (ACS) triggered by mast cell and platelet activation in the setting of allergic or anaphylactic insults. KS is a unique and complex cause of ACS and many cases may be missed due to its highly variable clinical manifestations. In this report, we present a case of KS type I triggered by metamizole in the absence of a previous history of allergy to this drug. Following the administration of metamizole, the patient developed generalized acute urticaria, chest pain and diaphoresis. Electrocardiography (ECG) showed ST-segment elevation suggestive of myocardial infarction complicated by ventricular tachycardia. No coronary disease was observed on coronary angiography. The cardiac manifestations of KS may be life-threatening, and so it is important to appropriately recognize and treat this condition.

Figure 1. ECG on admission displaying a normal sinus rhythm with an acute inferior-lateral myocardial ischaemia pattern, and ST elevation in DII-DIII-aVF (A), alternating with monomorphic ventricular tachycardia (B and C)

ABased on the coincidental occurrence of an allergic reaction and ACS with ST elevation in the absence of coronary disease on angiography, the patient was diagnosed with metamizole-induced KS type I.
After the diagnosis of KS was established and coronary heart disease was excluded, the patient was medicated with diltiazem 120 mg per day with remission of angina and normalization of cardiac markers. ECG revaluation on the 4th day showed sinus rhythm, pathological Q waves in DIII, T wave inversion in DII-DIII-aVF and normalization of the ST elevation (Fig. 2). Pre-discharge echocardiography revealed completely normal contractility. The patient was discharged on the 5th day and referred to the Allergy Unit. 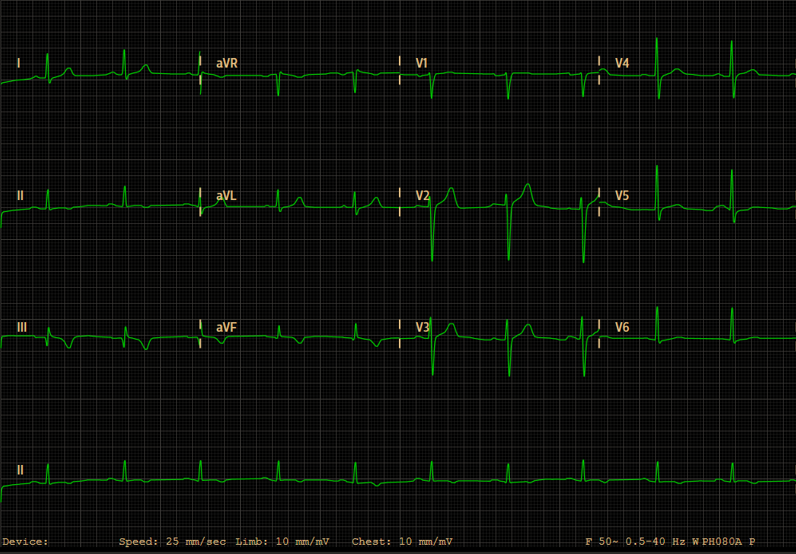 KS was first described in 1991 as an ‘allergic angina syndrome’[1]. Since the first reports, a common pathway for allergic and non-allergic coronary events has been demonstrated, based on the existence in allergic coronary events of a much higher degree of mast cell degranulation at plaque erosion or rupture sites compared with that in post-acute myocardial infarction of non-allergic aetiology [1]. Currently, KS is defined as the concurrence of ACS associated with mast cell and platelet activation in the setting of hypersensitivity and allergic or anaphylactic insults [1].
Determining its true incidence is difficult, since many cases may be missed or underdiagnosed due to its variable manifestations and physician unawareness [1]. Risk factors include a history of previous allergy and atherosclerosis [2]. Various triggers have been reported, including environmental exposures (e.g., insect bites, food) and common drugs (e.g., aspirin, antihypertensives, antibiotics, non-steroidal anti-inflammatory drugs)[1, 2].
We found very few published case reports of metamizole-induced KS. The safety of metamizole has been the subject of considerable controversy due to its rare but life-threatening side effects such as anaphylactic shock and agranulocytosis, and so it has been banned in many countries. However, it is still available in some countries to treat certain kinds of pain [3]. Most importantly, one should balance the benefits and harms of any drug before its administration as well as past history of hypersensitivity to similar drugs.
KS pathophysiology involves coronary artery spasm and/or atheromatous plaque erosion or rupture. If anaphylaxis occurs, pre-existing coronary artery disease is considered a risk factor [4]. KS is classiﬁed into three subtypes according to the condition of the coronary arteries. Type I is characterized by coronary spasm in normal arteries which induces either ACS with normal cardiac enzymes or which may progress to acute myocardial infarction with raised cardiac enzymes [4]. Type II is characterized by coronary spasm together with plaque erosion or rupture in a patient with angiographic evidence of coronary artery disease, and type III includes patients already treated with stenting for coronary thrombosis in which the allergic reaction causes stent thrombosis [5].
The case herein reported was compatible with KS type I, since coronary angiography did not show coronary disease. Considering the patient’s age and smoking habit, ST-segment change and cardiac enzyme elevation probably occurred due to temporary vasospasm in arteries with some degree of microvascular coronary disease not detectable by angiography. The diagnosis of KS is based on clinical signs and symptoms, along with laboratory, ECG, echocardiographic and angiographic evidence. A careful review of medication and allergies is imperative [1, 2]. The clinical spectrum is highly variable and depends on the initial allergic response, the patient’s comorbidities and level of exposure to the allergen [5]. Cardiac symptoms include malaise, chest pain with anginal characteristics, or palpitations. Simultaneously, typical cutaneous, respiratory and digestive anaphylactic manifestations may occur [1, 2]. Laboratory work-up includes investigation of myocardial injury enzymes. ECG usually shows ST-T changes suggestive of ischaemia and echocardiography can show regional wall motion abnormalities in the distribution of the affected artery. Coronary angiography may reveal vasospasm or stenosis [2].
Therapeutic management of KS is challenging, involving treatment of the allergic reaction and myocardial revascularization [4]. Treatment should be performed carefully, since drugs administered to treat cardiac manifestations can worsen allergy, and the drugs given for the allergic reaction can aggravate the cardiac dysfunction [2]. For example, beta-blockers and morphine should be avoided as they may trigger the release of histamine [5].
There are no specific guidelines for the treatment of KS and most of the evidence is based on case reports [4]. In patients with the type I variant, treatment of the allergic reaction can resolve the cardiac manifestations by itself. Medical treatment should include hydrocortisone and IV H1 or H2 antihistamines [4, 5]. Vasodilators such as calcium channel blockers and nitrates can resolve vasospasm [1]. In type II and type III KS, treatment includes myocardial revascularization based on the ACS guidelines together with allergic symptom management [1].
Complete recovery is expected with appropriate treatment, however rare complications may occur [2]. Our patient manifested periods of ventricular tachycardia as a complication of KS. Since a good prognosis depends on proper and immediate diagnosis and rapid work-up, medical professionals should be aware of this condition.