Conflicts of Interests: The authors declare there are no competing interests.
Acknowledgements: We gratefully acknowledge our patient and everyone involved in her treatment.
This article is licensed under a Commons Attribution Non-Commercial 4.0 License

Introduction: Persistence of the left superior vena cava (LSVC) is a rare anatomical variant in the general population, with an estimated incidence of 0.3–0.5% in healthy individuals. It may be diagnosed incidentally after imaging control of the placement of a central venous catheter (CVC) or other device. Patient and Methods: We present the case of a patient with acute disease who required central venous catheterization for the administration of intravenous chemotherapy. Results: Central venous catheterization proved difficult and imaging control revealed the catheter tip in an unusual position. Computed tomography to verify the catheter tip position revealed the presence of a persistent left superior vena cava. The patient then underwent the planned treatment with no complications associated with the CVC. Conclusion: Although uncommon, persistence of the LSVC can have a significant impact in clinical practice, particularly when invasive procedures are required. Its recognition is important in order to minimize the potential complications inherent to such procedures

Persistence of the left superior vena cava (LSVC) is a relatively rare anatomical variant in the general population, with an estimated incidence of 0.3–0.5% in healthy individuals [1, 2]. As it is normally asymptomatic, diagnosis may be incidental after imaging control of the placement of a central venous catheter (CVC) or other device [1, 2]. Its documentation is important since it may have clinical implications in specific cases, such as continuous haemodynamic monitoring or the correct positioning of a pacemaker. We present the case of a patient with persistent LSVC diagnosed after CVC placement during acute pathology.

A 70-year-old woman, diagnosed with acute myeloid leukaemia, was urgently admitted to begin intravenous induction chemotherapy. The first attempt to place a CVC was made in the right subclavian vein, with difficulty in the progression of the guidewire. After successful placement, a control chest x-ray was performed, and the tip of the catheter was seen in the homolateral jugular vein.
Given the need to start cytotoxic therapy, a new attempt was made to place a CVC, this time in the left subclavian vein. The procedure was carried out without complications; however, radiology showed the catheter was positioned to the left of the cardiac shadow, overlapping the image of the aortic artery (Fig. 1). Blood was collected from the CVC for gas analysis and was compatible with venous blood. Because of doubt regarding the position of the catheter, thoracic computed tomography was performed, which confirmed catheterization of an LSVC (Figs. 2 and 3).
The patient was then submitted to the planned treatment and discharged on the 35th day of hospitalization without complications associated with the CVCs. 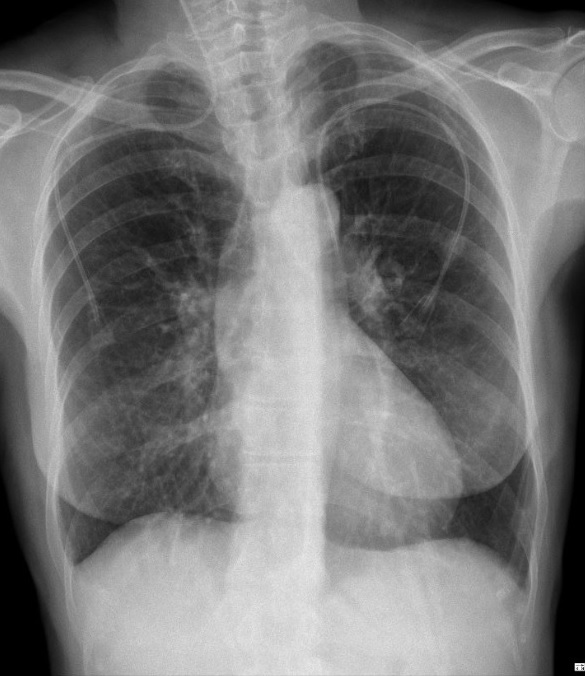 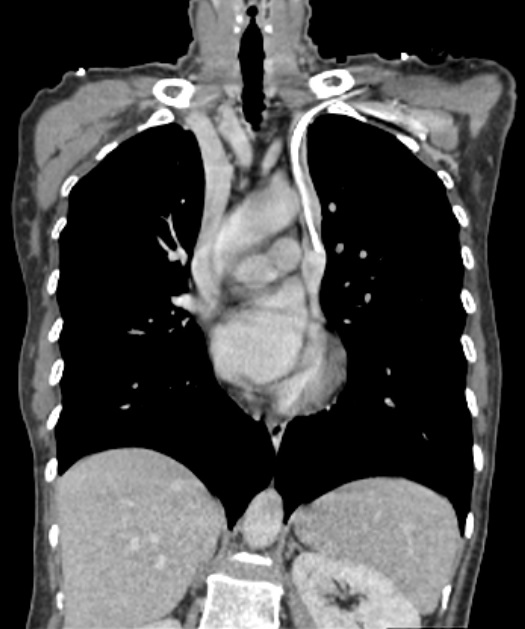 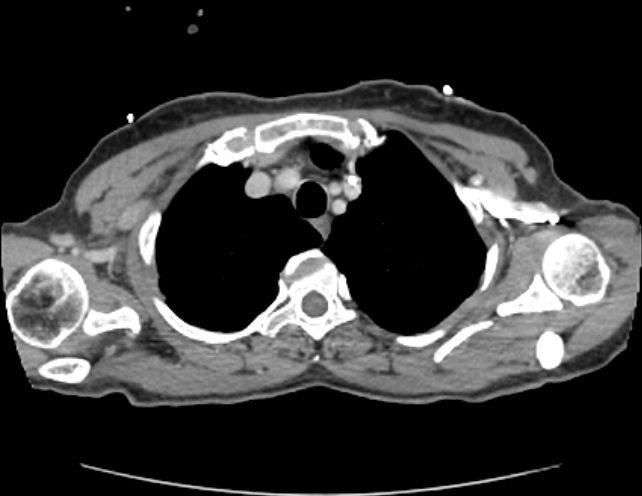 All professionals who perform invasive procedures should be familiar with central venous vascular anatomy. Persistent LSVC, despite its rarity, is the most frequent anatomical variant of the thoracic venous system [1, 2] and is caused by persistence of the left common cardinal vein [2]. In most cases, the LSVC drains into the coronary sinus of the right atrium with a concomitant normal right superior vena cava, which can be connected by a smaller calibre accessory vein [2]. Despite being generally asymptomatic, patients are more susceptible to cardiac arrhythmias due to anomalies in the atrioventricular node and the bundle of His. In the rare cases (<8%) where venous drainage is into the left heart, patients may show symptomatic right-to-left shunt [1, 2].
The diagnosis of LSVC persistence with chest radiography alone is difficult, however, there may be some suggestive signs, such as an abnormal outline of the upper mediastinum caused by the widening of the aortic shadow [2]. Transthoracic echocardiography can also be a useful tool, sometimes identifying an enlarged coronary sinus [3]. Computed tomography, especially with intravenous contrast, is the best method for visualization, allowing a detailed assessment of the thoracic vasculature and confirmation [4] of the exact location of the CVC tip as shown in this case (Fig. 2).

Although in most cases persistent LSVC has no clinical impact, the internist must be alert to its existence, particularly when subclavian or jugular central venous catheterization is difficult. The degree of suspicion must be high in order to minimize the serious potential complications inherent to this type of procedure.
References