Significant leucocytosis in the setting of an underlying malignancy may be attributed to several causes and is not uncommon; however, extreme leucocytosis (>50×109 cells/l) and hypereosinophilia is less common and may represent a paraneoplastic syndrome. The underlying mechanism is thought to be bone marrow stimulation by tumour-produced cytokines, most notably interleukin-5 (IL-5) and granulocyte-macrophage colony-stimulating factor (GM-CSF). This paraneoplastic syndrome is likely reflective of extensive disease and dissemination, and options for treatment are limited but include tumour resection, corticosteroids and hydroxyurea. In this report, we discuss an unusual case of known stage III lung adenocarcinoma presenting with an ischaemic stroke and extreme leucocytosis and hypereosinophilia.

A 68-year-old man with recently diagnosed stage III lung adenocarcinoma and hypertension presented to the emergency department with a 12-hour history of acute speech difficulty and right arm weakness. He had reported a 6-month history of progressive fatigue, chest pain and shortness of breath. There had been a plan to start the patient on a platinum-based chemotherapy regimen but the patient presented to the hospital prior to initiation of treatment.
On presentation, the patient was afebrile, blood pressure was 120/69 mmHg, pulse was 99/min, respiratory rate was 18/min and oxygen saturation was 96% on room air. The neurologic examination was significant for poor concentration, moderate dysarthria, 3/5 strength in all muscles of the right upper extremity and 5/5 strength in all other extremities. Lung auscultation was significant for diffuse rhonchi.
Relevant laboratory studies revealed a white blood cell count of 153×109/l, with 52% eosinophils, 35% neutrophils and no blasts. Haemoglobin was 10.6 g/dl and the platelet count was 137×103/µl (Fig. 1).

Due to the patient’s focal neurologic deficits, magnetic resonance imaging (MRI) of the brain with contrast was performed, which showed bilateral acute infarcts in the watershed distribution between the anterior and middle cerebral artery territories (Fig. 2).
Upon further examination< of the electronic medical record, it was revealed that 6 weeks prior to presentation, the white blood cell count was 9×109/l. Given the acute rise in the white blood cell count combined with acute infarcts seen on MRI, there was concern for leucostasis causing a cerebral infarct. Leucopheresis was initiated emergently and the patient was started on hydroxyurea.
To further work up the acute significant leucocytosis and eosinophilia, a bone marrow biopsy was performed, which revealed infiltration of the marrow by lung adenocarcinoma, and no blasts. This finding, combined with the absence of blasts in the peripheral blood, indicated that leucostasis was unlikely to be the cause of this patient’s symptoms given that mature cells do not cause leucostasis. The acute cerebral infarct was therefore attributed to the hypercoagulable state of malignancy, and the patient was started on anticoagulation therapy. 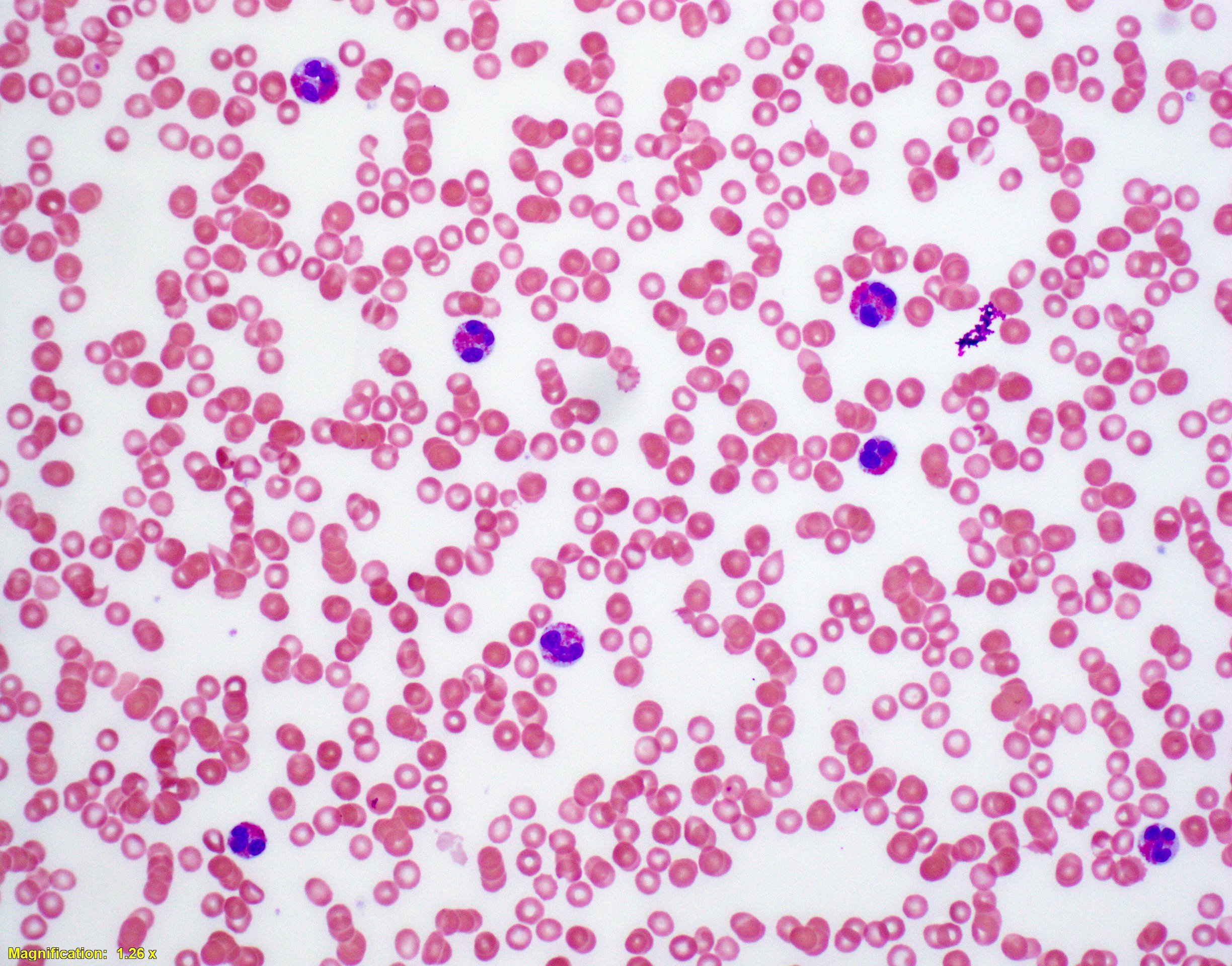 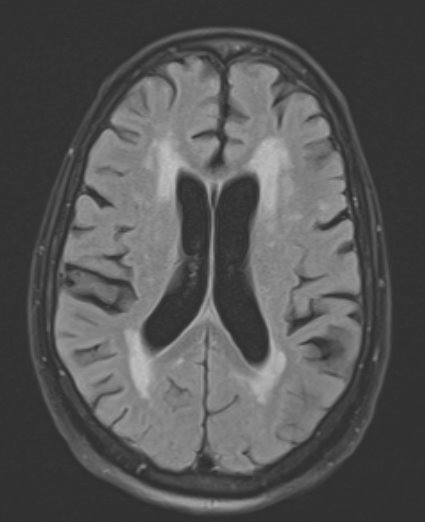 At this point, there was still no explanation for the extreme leucocytosis and eosinophilia. Significant leucocytosis in the setting of an underlying malignancy may be attributed to several causes, including infection, haematologic malignancies and haematopoietic growth factor administration [1–3]. While it is not unusual for lung cancers to be associated with mild leucocytosis, extreme leucocytosis (>50×109 cells/l) is less common [4]. Given the rapid onset of leucocytosis and focal neurologic deficits in our patient, combined with the absence of immature cells, a primary haematologic malignancy was unlikely. Furthermore, the patient had not received haematopoietic growth factors.
Given that the work-up for leucocytosis and hypereosinophilia, defined as an absolute eosinophil count of greater than 1,500 cells/µl, was unrevealing, it was thought that these were likely due to a paraneoplastic leukaemoid reaction. Granger et al. reported that 10% of patients with solid tumours have leucocytosis due to a paraneoplastic leukaemoid reaction [4]. Hypereosinophilia is more uncommon, with an incidence of 1% in malignant tumours [5]. While most often associated with haematologic malignancies, hypereosinophilia has also been seen in lung, thyroid, gastrointestinal and breast cancer [1, 5]. The underlying mechanism is thought to be bone marrow stimulation by tumour-produced cytokines, most notably interleukin-5 (IL-5) and granulocyte-macrophage colony-stimulating factor (GM-CSF) [1, 5]. IL-5 is a T cell-derived cytokine important for the production, activation and recruitment of eosinophils to the tumour microenvironment [1]. Pandit et al. noted that in a patient with non-small-cell lung cancer, IL-5 levels, the leucocyte count and the eosinophil count were all elevated pre-operatively but decreased following tumour resection [6]. Immunohistochemistry analysis of the resected tumour revealed increased IL-5 expression, suggesting the tumour itself was producing IL-5 [6]. Given this, it is likely that our patient’s extreme leucocytosis and hypereosinophilia was secondary to tumour-derived cytokines.
There is no consensus on treatment for paraneoplastic eosinophilia. Resection of the tumour has been shown to decrease the eosinophil count and IL-5 levels [6]. Lo et al. also showed improvement of eosinophilia in a patient with lung adenocarcinoma with the administration of a combination of corticosteroids and hydroxyurea [2]. Chemotherapy may be considered for patients in fair condition, although the prognosis should be guarded [7]. As haematopoietic growth factors provide tumours with permanent activation signals, tumours with peripheral leucocytosis are typically more aggressive [3]. Kasuga et al. showed that patients with newly diagnosed lung cancer and associated paraneoplastic leucocytosis had a median survival of 4.6 months, vs 20.8 months without paraneoplastic leucocytosis [8]. Another study by Schernberg et al. used a multivariate analysis in 180 patients with lung cancer to show that the most significant negative prognostic factor was leucocytosis. At the 3-year follow-up, overall survival was 22% in patients with an initial leucocytosis, vs 44% without initial leucocytosis[9]. The hypereosinophilia seen in this patient was likely reflective of extensive disease and dissemination [6].

In our patient, computed tomography of the chest revealed progression of disease. The patient was started on chemotherapy with carboplatin and paclitaxel in an attempt to decrease tumour burden; however, his respiratory status deteriorated and he was intubated in the intensive care unit. Due to the severity of his disease and per the wishes of his family, the patient was extubated and passed peacefully.