Diffuse dermal angiomatosis is a benign vascular disorder suspected in patients with cardiovascular risk factors. We report the case of a 62-year-old woman with a non-healing hip wound but no significant cardiovascular risk factors, who was found to have diffuse dermal angiomatosis on biopsy leading to the diagnosis of severe peripheral vascular disease. Her wound healed after revascularization.

Diffuse dermal angiomatosis (DDA) is a type of reactive skin angioproliferation, characterized by red-violet purpuric papules or plaques leading to necrosis. The diagnosis is suspected in patients with cardiovascular risk factors. DDA presenting in an asymptomatic patient is novel. Here, we report the case of a 62-year-old woman without any significant underlying cardiovascular risk factors, who presented with a non-healing wound after a fall and was found to have DDA on biopsy, leading to the diagnosis of severe peripheral vascular disease (PVD).

A 62-year-old woman with well-controlled essential hypertension presented to the emergency department complaining of a chronic non-healing left hip wound that had developed 1 month after a fall. The wound had progressed from a pulsating mass to a black necrotic eschar on her left lateral thigh (Fig. 1). The pain did not respond to over-the-counter medications. The patient denied any fever, chills, decreased sensation, decrease in range of motion, joint pains or stiffness, joint rash, proximal muscle weakness, leg swelling, or any other associated symptoms. The patient denied any history of smoking or intravenous drug use. Her previous work-up at another hospital had been unrevealing. She had been treated with two courses of broad-spectrum antibiotics before presentation at our hospital.
The patient was on room air and afebrile, with a heart rate of 110 beats per minute and a blood pressure of 148/53 mmHg. On examination, a large, thick necrotic eschar (9×10 cm) surrounded by a border of erythema, was noted over the thigh, which was tender to touch, with femoral pulses intact bilaterally. The rest of the physical examination was unremarkable. 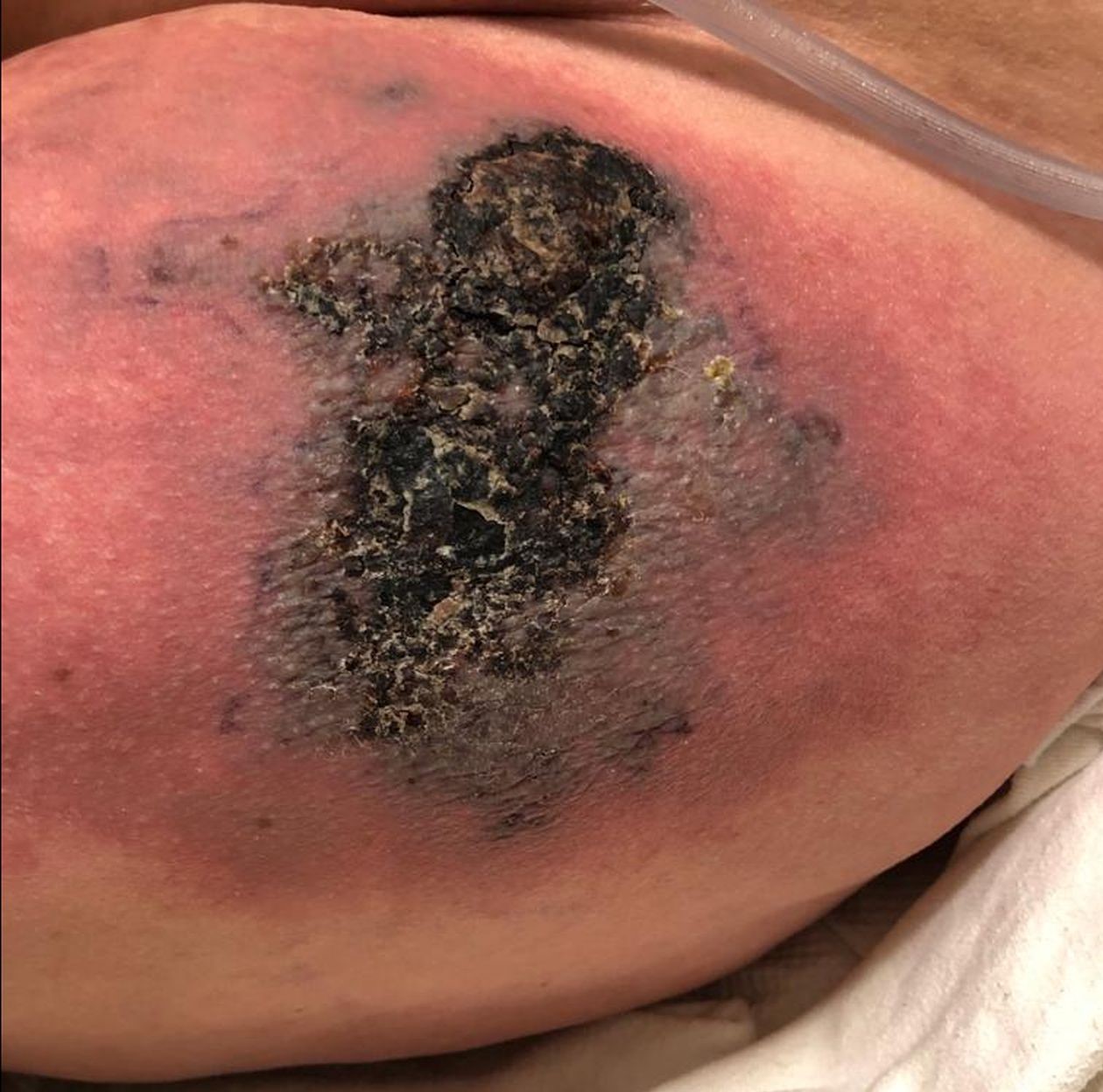 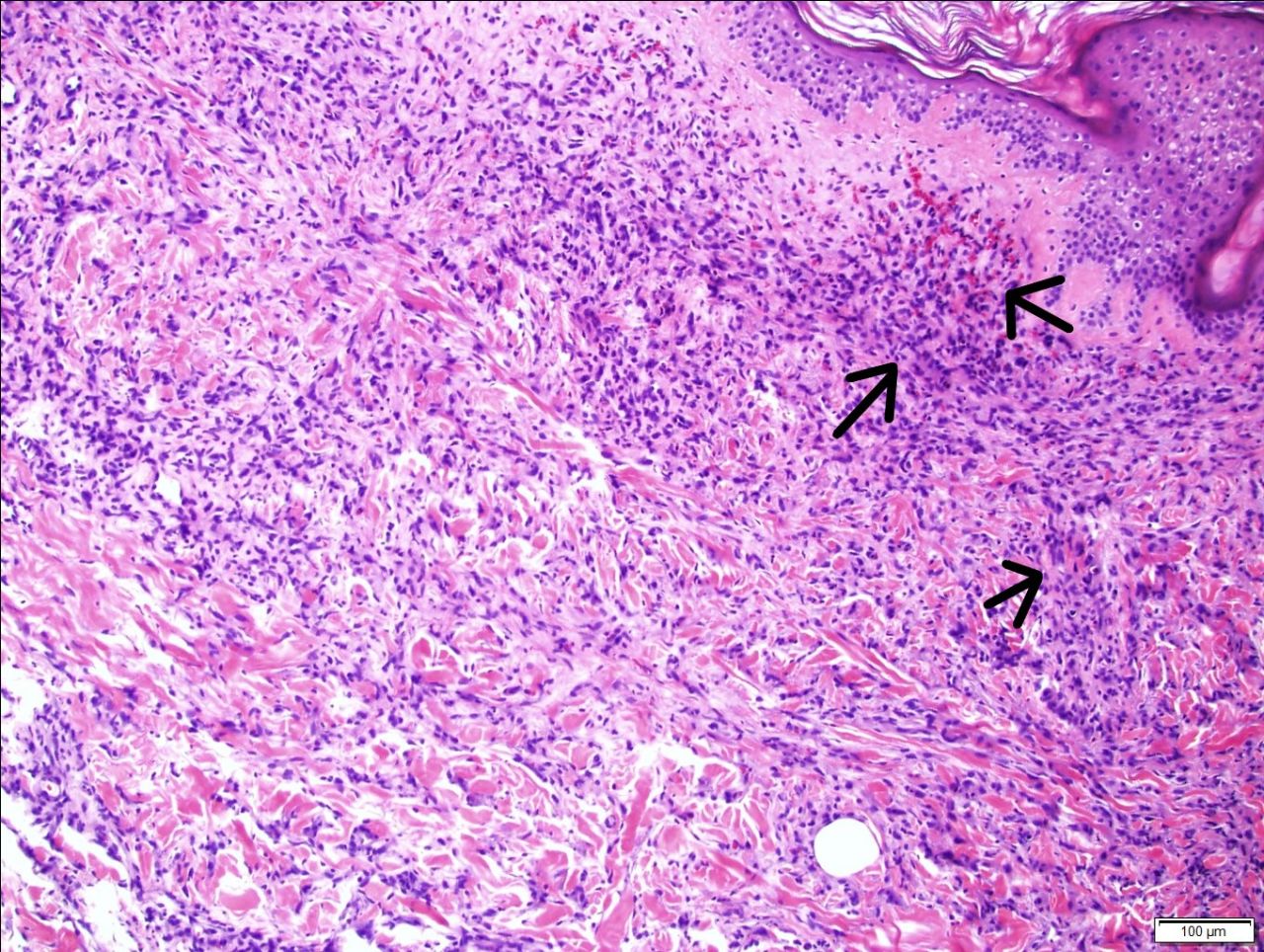 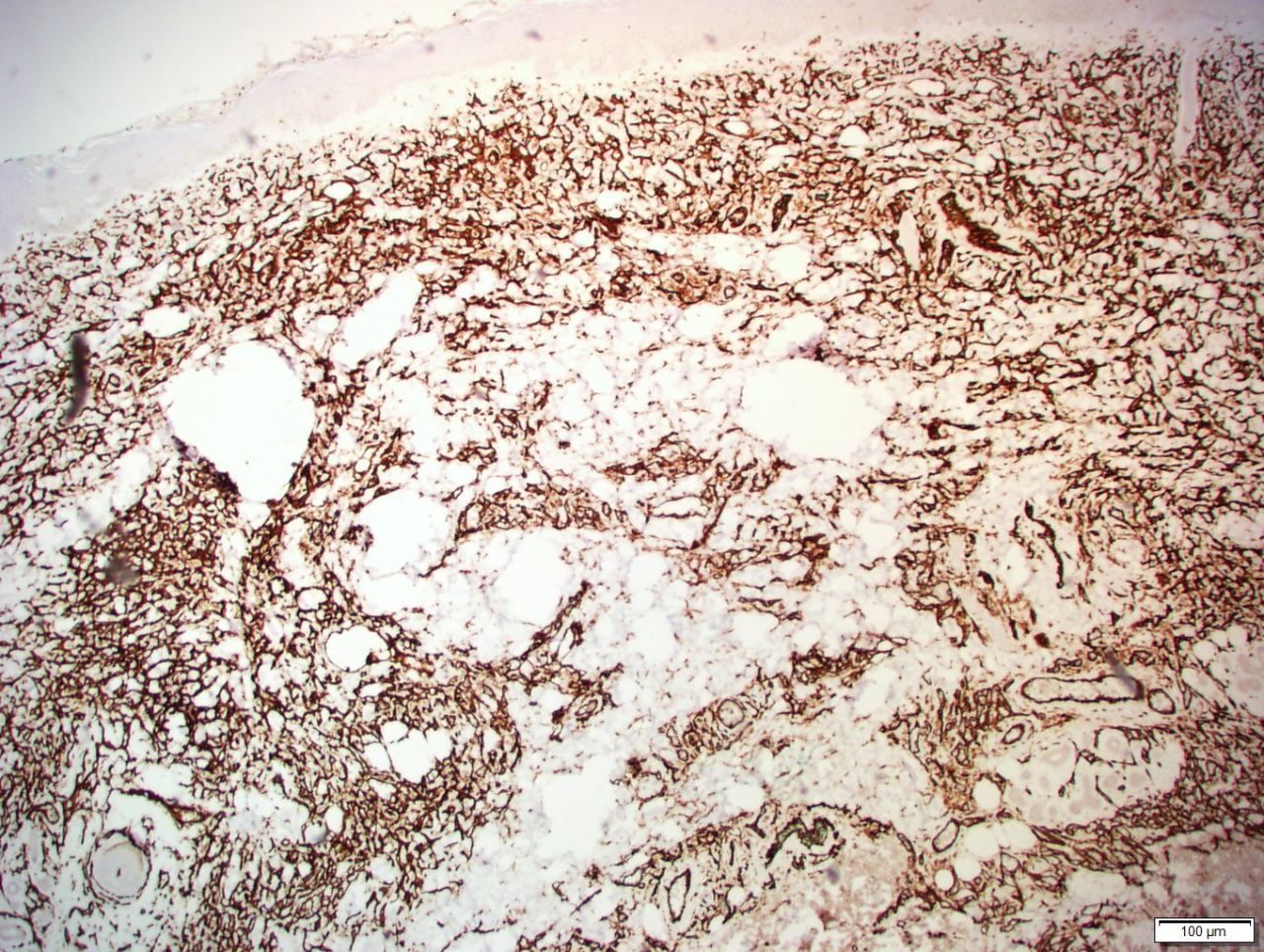 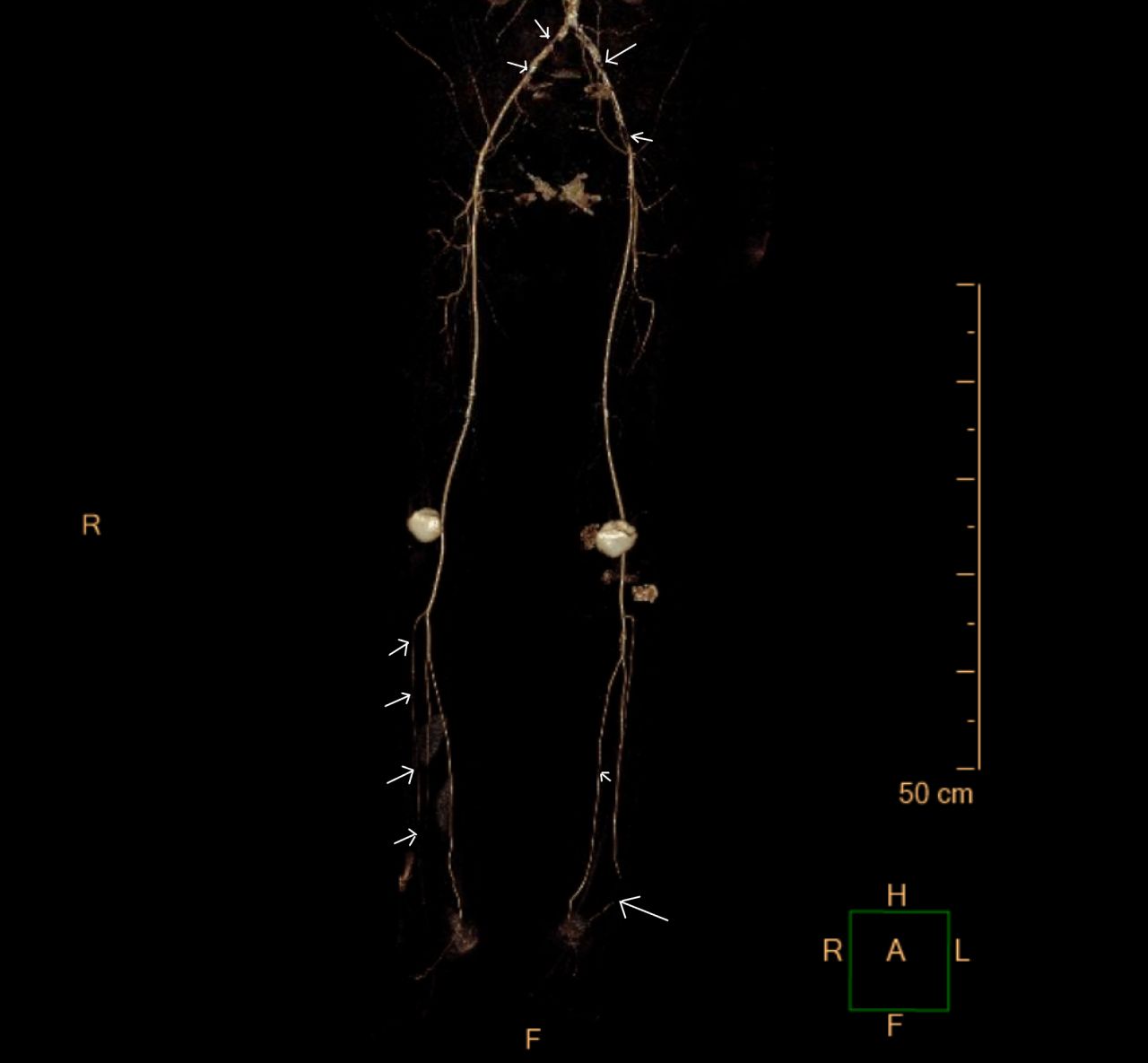 Her hospital course was further complicated with opioid dependence, opioid-induced constipation and hypovolemic hyponatremia. During her stay, the patient’s wound healed, resulting in yellowish crusting and induration over her left hip. She was discharged to a nursing facility after 10 days of hospitalization with close follow-up by vascular surgery and her primary care physician.

DDA is a benign vascular disorder of the skin associated with underlying atherosclerotic PVD. The pathogenesis is possibly related to the release of proangiogenic factors for restoration of diminished blood flow [1]. The disease affects people 40–60 years of age, commonly females with risk factors, and occurs at locations such as the breasts, lower calves and abdomen. Colmenero et al.[2] mentioned that dermal manifestations included erythematous, poorly demarcated plaques that ultimately undergo necrosis.
Tanya et al. suggested in a case report that the diagnosis should be suspected in patients with cardiovascular risk factors such as calciphylaxis, monoclonal gammopathy and antiphospholipid syndrome. Notably, the same report also suggests smoking, obesity and PVD as risk factors[3]. The management of DDA depends on the underlying vascular status and revascularization is usually the mainstay of treatment. Yang et al. reported complete resolution of skin lesions after revascularization [4]. In two other reports, isotretinoin and corticosteroids were also effective because of their anti-angiogenesis properties [5].
Touloei et al. in 2019 summarized the findings of all published case reports on DDA [6]. Out of 73 patients, 71.2% were female with a mean age of 49.5 years, 52% had a lesion on the breast and 7.5% on the thigh, as in our case. Smoking (57.5%) was the most common risk factor, followed by obesity (32.9%), vascular disease (23.3%) and hypertension (2.5%). Treating the underlying cause, revascularization and isotretinoin were effective in treating breast DDA. In some cases, steroids were beneficial.
Our case was unique as DDA mimicked a post-traumatic wound in a patient with no significant cardiovascular risk factors, and DDA led to a diagnosis of severe PVD.

Patients with diagnosed DDA should be evaluated for underlying PVD. Management is based on strict control of underlying comorbidities and revascularization, and in some cases, isotretinoin and steroids can be beneficial