Infection with cytomegalovirus (CMV) with resistance to ganciclovir (GCV) is a therapeutic challenge in kidney transplant patients, because standard treatment options are nephrotoxic. We report the case of a kidney transplant recipient with GCV-resistant CMV disease, in whom letermovir, a novel inhibitor of CMV packaging, was administered off-label and prevented a relapse of disease once the CMV load was decreased by cidofovir. Furthermore, we observed significant drug interactions between letermovir and tacrolimus.

A 73-year-old, cytomegalovirus (CMV)-negative male patient, who had been on peritoneal dialysis due to autosomal dominant polycystic kidney disease, received an allogenic kidney transplant from a CMV-positive donor. Immunosuppressive treatment comprised tacrolimus, prednisolone and mycophenolate-mofetil. Valganciclovir was given for CMV prophylaxis [1]. Graft function was good with a serum creatinine level between 1.7 and 2.0 mg/dl (149–176 μmol/l). However, on day 114 after transplantation, screening for CMV became positive. The dosage of valganciclovir was escalated in accordance with current guidelines [1]. Nevertheless, the CMV copy number kept rising, even though treatment was switched to intravenous ganciclovir (GCV). In line with this, resistance analysis revealed a mutation in the UL97 gene conferring resistance to GCV (Fig. 1). When the patient developed CMV disease with diarrhoea and leukopenia, we reduced the level of immunosuppression by discontinuing mycophenolate-mofetil. However, neither increasing the dosage of GCV nor treatment with IgG against CMV proved successful. Meanwhile, graft function had deteriorated (Fig. 2). In order to avoid the highly nephrotoxic antiviral agents cidofovir or foscarnet, we administered letermovir (240 mg bid) off label, which stops viral replication and is approved for CMV prophylaxis in stem cell transplantation. Tacrolimus blood levels rose after the introduction of letermovir, so the dosage had to be adjusted (Fig. 3). After an initial drop, the CMV DNA load again increased. However, none of the known resistance mutations to letermovir was detected by sequencing gene UL56 completely and gene UL89 at positions 134,866–134,686 [2]. Because the patient’s clinical condition continued to be poor, we administered 225 mg cidofovir as rescue therapy despite the impaired kidney function.
Only 4 days later, the CMV DNA level in blood had dropped considerably to 14,150 IU/ml, and the patient’s clinical condition improved markedly. However, graft function worsened with creatinine levels of up to 3.4 mg/dl (303 μmol/l), so that administration of cidofovir was not repeated. Instead, we re-introduced letermovir to prevent new CMV flares, which again led to increasing tacrolimus levels (Fig. 3). The CMV DNA load decreased further and continued to fluctuate around the detection limit, but no seroconversion was detected. Unfortunately, graft function deteriorated rapidly 225 days after transplantation. Kidney histology excluded CMV infection or acute rejection of the graft. The patient had to start haemodialysis on day 261 after transplantation. 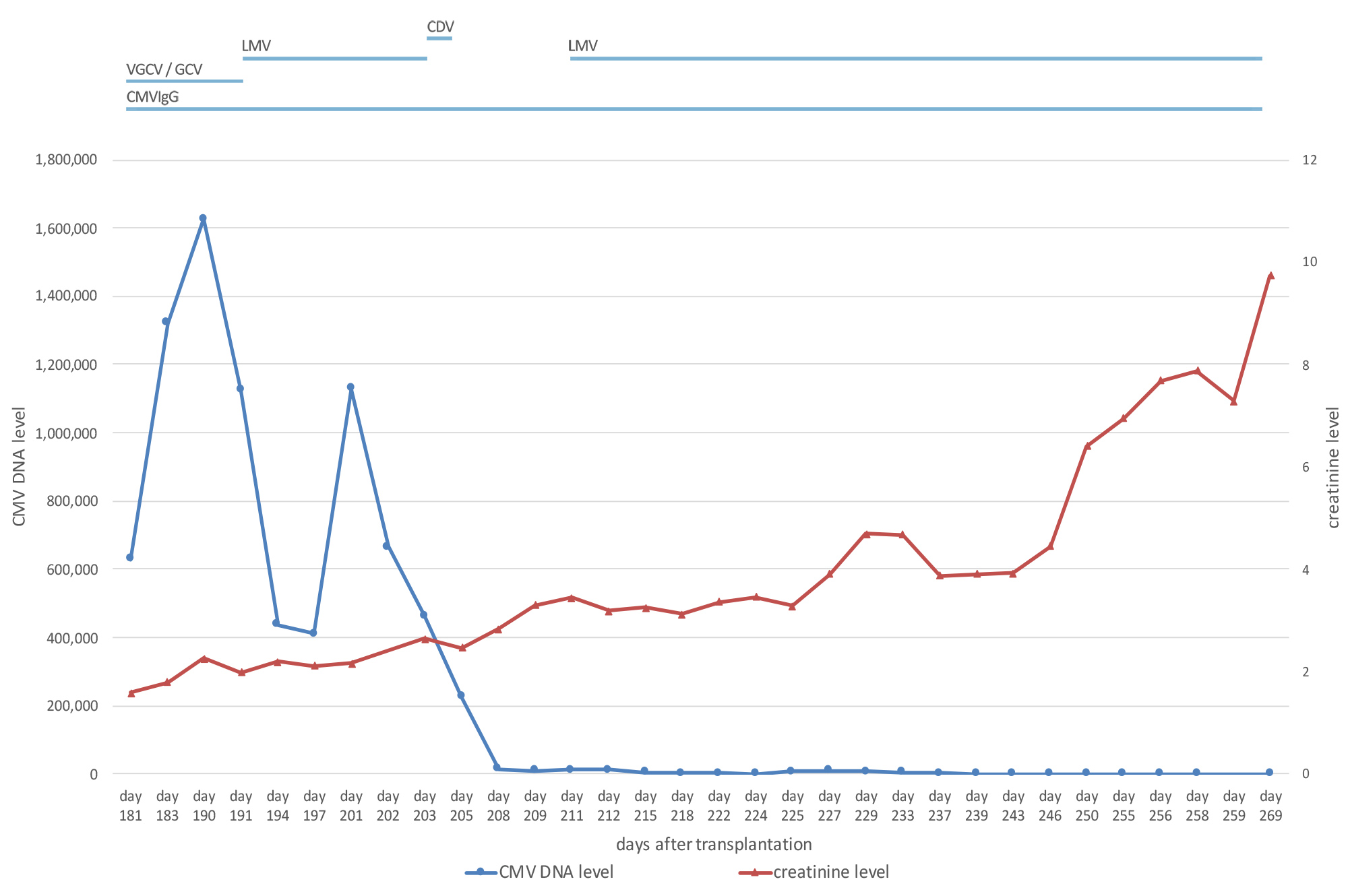 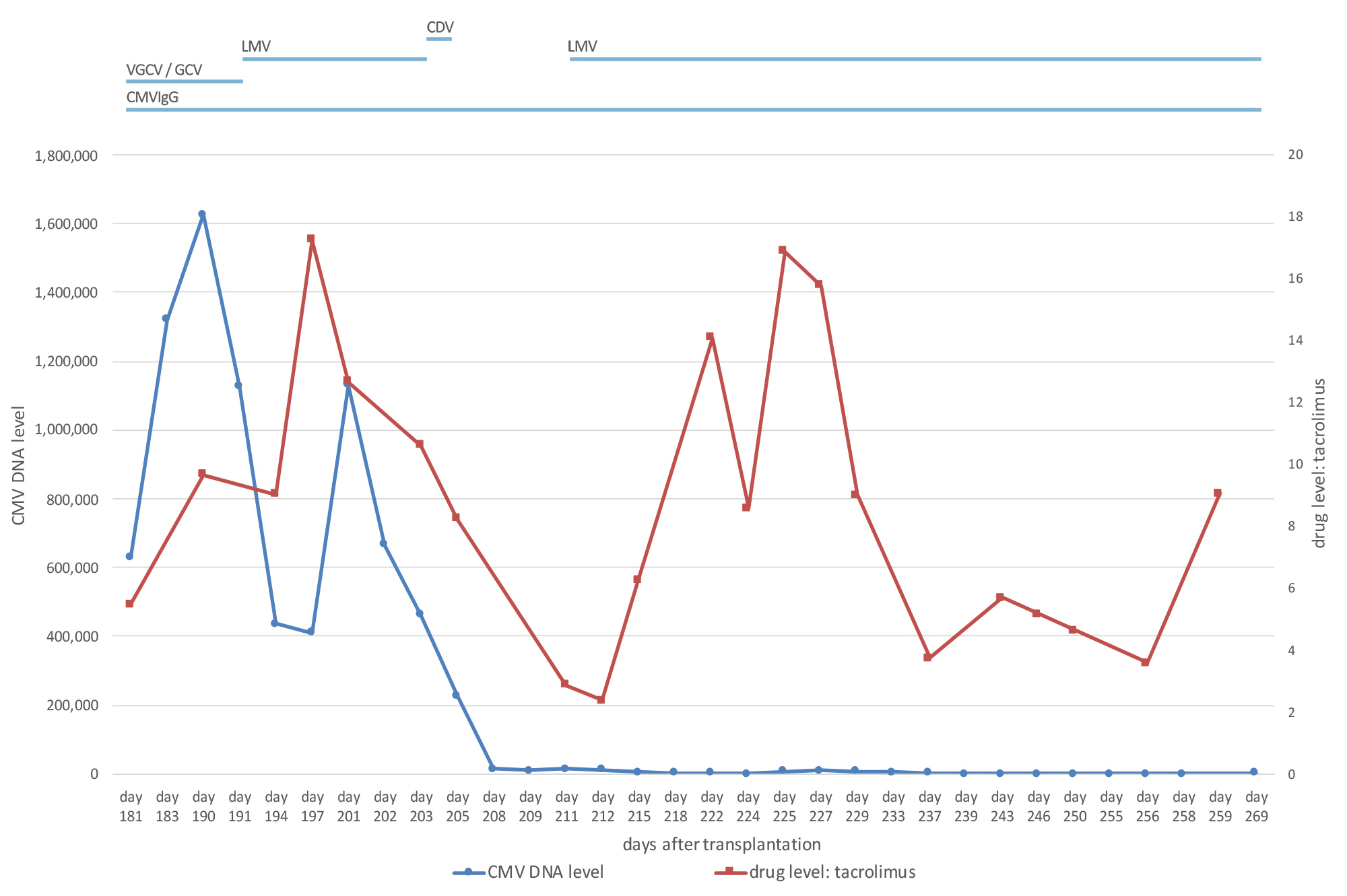 The risk for CMV disease is high when a CMV-seronegative recipient receives a graft from a seropositive donor, but is considerably reduced by oral prophylaxis with valganciclovir. This approach, however, is limited by the development of drug-resistance to GCV or valganciclovir. The efficacy of foscarnet and cidofovir is generally not affected, but both are highly nephrotoxic and frequently lead to bone marrow suppression [1]. Therefore, we reduced the level of immunosuppression and administered CMV-IgG, once resistance to GCV was known.
Letermovir, which was approved by the Food and Drug Administration of the United States (FDA) for CMV prophylaxis in hematopoietic stem cell transplantation [1], is a drug with a novel mode of action by targeting the viral terminase complex consisting of the viral proteins UL56, UL89 and UL51, thereby interfering with the processing and packaging of the viral progeny DNA into capsids [3]. To avoid the nephrotoxic effects of cidofovir or foscarnet, we treated our patient with letermovir off label, because this approach has proved successful in patients after lung transplantation [4]. A major difficulty is monitoring treatment response to letermovir, because DNA production by the infected cells continues, although shedding of infectious virus is prevented. Additionally, the delay until CMV DNA loads decline under treatment with letermovir may be considerable [5]. Unfortunately, pp65 antigenemia was also reported as an unreliable indicator of response to letermovir treatment in a case series of patients with drug-resistant CMV retinitis after solid organ transplantation [6]. Laboratory assays to distinguish between active viral particles and inactive leftovers are not yet available, but they will be important for the therapeutic use of letermovir, because development of resistance to letermovir due to mutations in the UL56 gene may occur and lead to treatment failure [7]. In our patient, we excluded all known resistance mutations by sequencing.
In the absence of a virological or clinical response to letermovir, we decided to treat the patient with cidofovir as a last resort despite its nephrotoxicity. The virological response to the first course of cidofovir was excellent, but kidney function declined, so we did not administer cidofovir again. Because successful secondary prophylaxis with letermovir has been reported in a solid organ transplant recipient with GCV-resistant CMV infection [5], we used letermovir as secondary prophylaxis to prevent a relapse of CMV disease. After re-introduction of letermovir, no relapse of symptomatic CMV infection occurred nor did the DNA load rise again. Since DNA production continued and seroconversion did not occur, we believe that letermovir suppressed the replication of infectious CMV particles effectively.
Because letermovir is a weak-to-moderate inhibitor of cytochrome P450 3A (CYP3A) and tacrolimus is metabolized primarily by CYP3A [8], we monitored tacrolimus levels frequently. In our patient, the tacrolimus dose had to be adjusted from 7 mg bid to less than 3 mg bid when letermovir was started. Drug interaction between letermovir and tacrolimus was further confirmed by decreasing tacrolimus levels after discontinuation of letermovir and again rising levels after re-introduction of letermovir.
This case indicates that letermovir may become a valuable option for prophylaxis and treatment in kidney transplant patients with drug-resistant CMV infection, but that interactions between letermovir and tacrolimus necessitate close monitoring of tacrolimus levels.