Non-polio enteroviruses are ubiquitous viruses responsible for a wide spectrum of disease in people of all ages, although infection and illness disproportionately affect infants and young children. Hand-foot-mouth disease (HFMD) is an enteroviral clinical syndrome most frequently caused by coxsackievirus-A16 and enterovirus-A71. Since 2008, a novel coxsackievirus-A6 genotype has been associated with more severe HFMD in both children and adults, presenting with a unique constellation of findings, and whose prevalence has been increasing over the last few years. In this case report, an atypical clinical picture of confirmed enterovirus HFMD is described in an immunocompetent adult, with exuberant clinical findings, clinically consistent with coxsackievirus-A6 infection. This case report highlights the importance of awareness of the clinical presentation of this increasingly common infection in adults.

A 29-year-old woman was admitted to the Emergency Unit due to lipothymia. She was previously healthy and had been feeling well until 4 days before admission, when watery diarrhoea, nausea and colicky diffuse abdominal pain developed, followed by high-grade fever (maximum 39.2°C). All these symptoms resolved in less than 24 hours. Severe odynophagia began the following day, which prompted examination by a physician, who documented exuberant tonsillopharyngitis with whitish exudate (Fig. 1A). The patient was medicated with acetaminophen and ibuprofen, with modest clinical improvement. On the 3rd day, small pruritic vesicles developed adjacent to the lateral commissures of the mouth and around the nostrils, which later became crusted (Fig. 2A). Later that day, the patient described pain on the distal extremity of the second finger of the left hand and in the third and fourth fingers of the right hand, associated, hours later, with rubor and oedema (Fig. 2B). Malaise was present from day 1 but worsened progressively. By the 4th day of illness, a non-pruritic rash developed, which began on the abdomen and trunk and later progressed to the limbs, including the dorsum of the hands and feet. Lipothymia motivated Emergency Unit admission that day. Four days before her symptoms began, the patient had been in contact with an infant showing signs of coryza. On examination, the patient was mildly dehydrated. Vital signs were normal. Oropharyngeal examination revealed hyperaemia and ulcerative lesions in the anterior pillars of the fauces, soft palate and tonsils bilaterally; at that time no exudate was observed (Fig. 1B). A non-pruritic papular rash was documented on the abdomen, trunk and limbs, with a distinct petechial pruritic rash on the palms and soles of the feet, more exuberant on the distal extremities of the fingers (Fig. 3A) and on the calcaneus area (Fig. 3B).
Blood work-up revealed mild elevation of C-reactive protein (4.61 mg/dl); a complete blood count with differential, liver and kidney panels, troponin and electrolytes testing was unremarkable. An HIV 1-2 immunoassay was negative. An electrocardiogram showed no abnormalities. Nasopharyngeal lavage was performed and tested positive for enterovirus by real-time reverse transcription–polymerase chain reaction (RT-PCR).
The patient was diagnosed with atypical hand-foot-mouth disease (HFMD), and after intravenous hydration and clinical improvement, was discharged home under supportive measures. The clinical syndrome lasted no more than 7 days.
Approximately 10 days after complete recovery from the viral syndrome, the patient developed skin desquamation in the distal extremities of all fingers (Fig. 4B) as well as in the calcaneus area (Fig. 4A), in the same areas where the petechial rash had been more exuberant. Six and a half weeks after recovery, the patient also presented onychomadesis (detachment of the nail plate from the nail matrix) on the second finger of the left hand (Fig. 5A) and third and fourth fingers of the right hand (Fig. 5B), also the fingers that previously presented inflammatory signs. Desquamation resolved after 4 days and onychomadesis after 2 months with the growth of a new underlying nail plate. 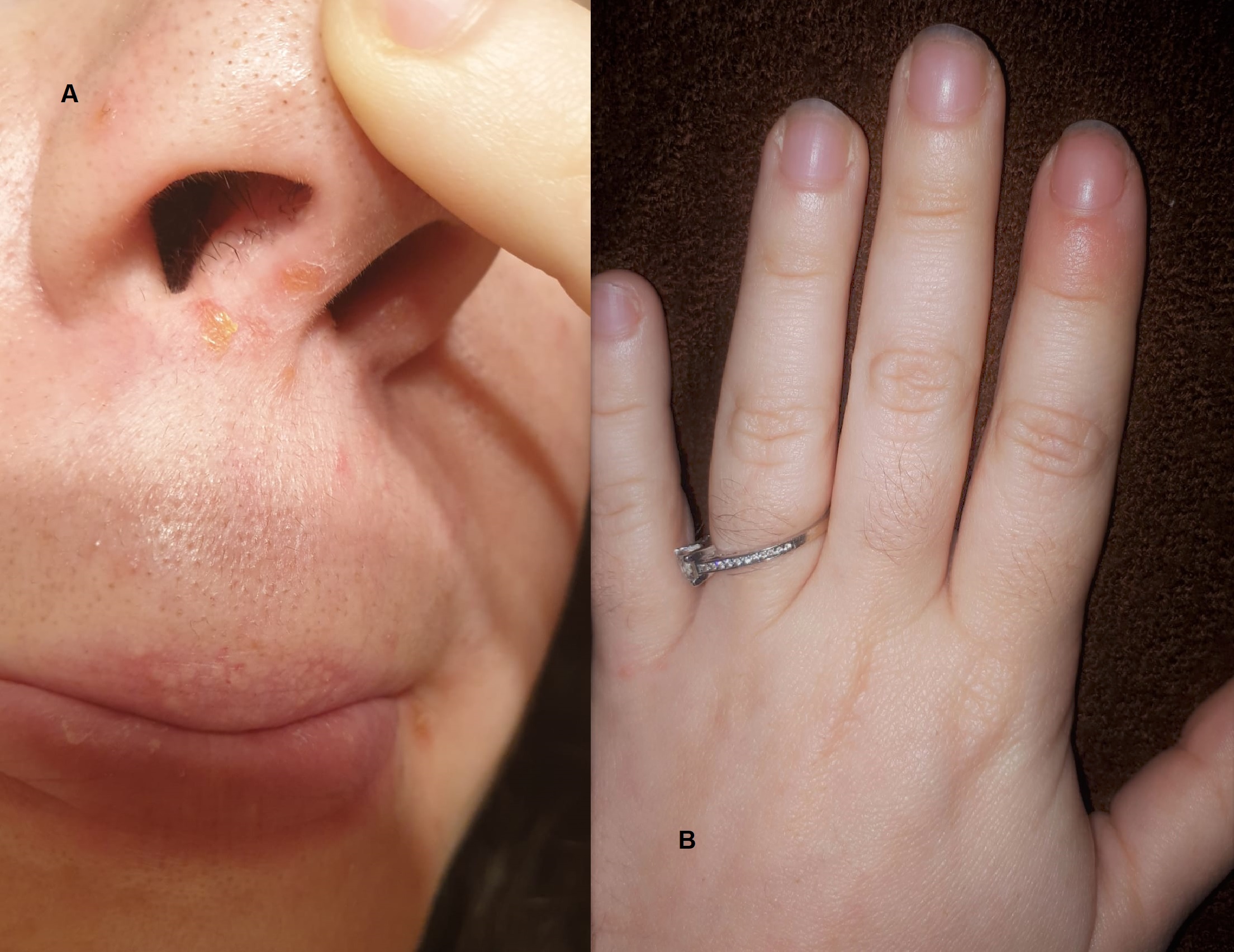 Figure 1. (A) Exuberant tonsillopharyngitis with whitish exudate. (B) Hyperaemia and ulcerative lesions (white arrow) in the anterior pillars of the fauces and soft palate
Figure 2. (A) Small crusted lesions adjacent to the lateral commissures of the mouth and around the nostrils. (B) Inflammatory signs in the distal extremity of the second finger of the left hand 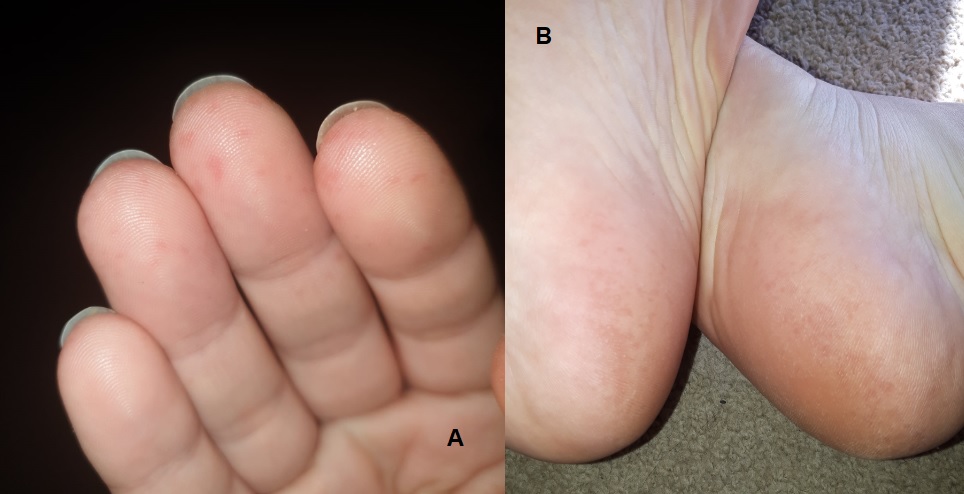 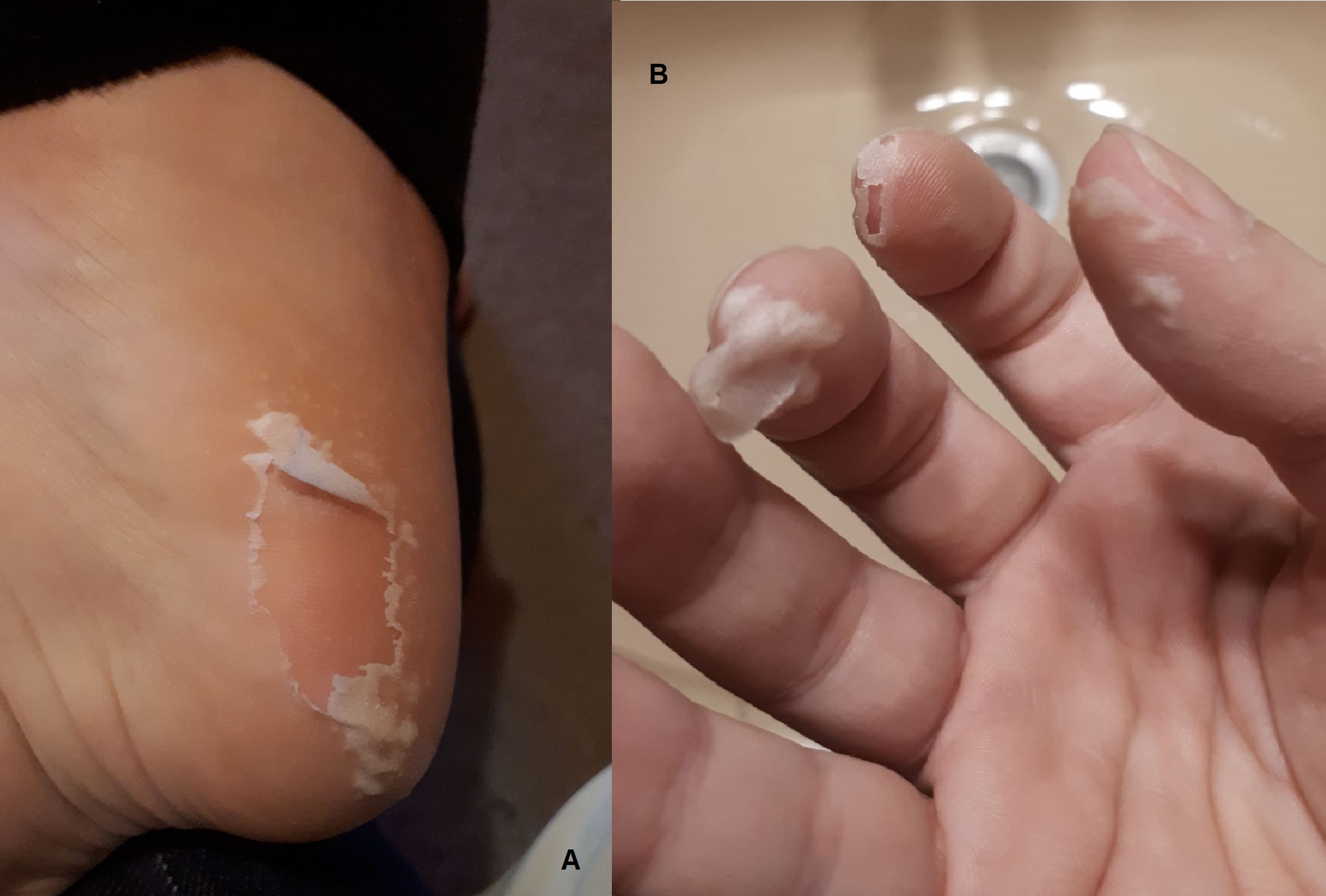 The patient was urgently referred to the vascular surgery department and underwent an exploratory laparotomy. However, the rupture was uncontrollable and she died following cardiac arrest secondary to hypovolaemic shock.

Human enteroviruses are ubiquitous viruses found throughout the world and include polio and non-polio enteroviruses (group A and B coxsackieviruses, echoviruses and enteroviruses) [1]. Transmission occurs mainly through fecal-oral contact, after ingestion of fecal material and oral and respiratory secretions containing the virus [1]. Once ingested, the enteroviruses replicate in the lymphoid tissues of the pharynx and lower intestine, producing a viremia that disseminates and infects multiple sites where replication continues [1]. Local replication is responsible for the clinical manifestations of enteroviral infections, and causes the death of infected cells, inflammation and necrosis [1].
Non-polio enteroviruses are responsible for a wide spectrum of disease in all ages, although infection and illness disproportionately affect infants and young children [2]. As many as 90% of infected individuals may have subclinical infections, but there can also be serious infections, such as central nervous system infections and myopericarditis [2].
HFMD is one manifestation of enterovirus infection, usually caused by enterovirus A species [2]. It typically manifests with low-grade fever, malaise, anorexia, and oral lesions that initially present as macules and rapidly vesiculate and ulcerate [2]. Exanthema and tender vesicles on the dorsum of the hands and feet, frequently involving the palms and soles, sometimes accompanies the enanthem [2]. HFMD usually last 7–10 days [2].
Coxsackievirus-A16 and enterovirus-A71 have traditionally been the primary strains causing HFMD [3], but since 2008, a novel coxsackievirus-A6 genotype has been observed in multiple locations globally and has been associated with more severe disease in both children and adults [4]. It presents a unique constellation of findings, including higher fever, wider distribution (extremities, face, lips and perioral area, buttocks, perineum), more extensive skin involvement (vesiculobullous lesions, ulcerations) and longer duration[3]. The involvement of the perioral area may be a clinical marker of A6 HFMD [5]. Delayed-onset palmar and plantar desquamation (1–3 weeks after HFMD) and nail dystrophy (Beau lines and onychomadesis, 1–2 months after HFMD) are also characteristic [4]. Nail dystrophy likely occurs due to direct insult to the nail matrix from the viral infection [4].
In this case report, an atypical clinical picture of confirmed enterovirus febrile illness is described, in an immunocompetent adult, with exuberant clinical findings, clinically consistent with coxsackie-A6 HFMD – high fever, exuberant tonsillopharyngitis, diffuse skin lesions involving the perioral area, and delayed-onset desquamation and onychomadesis. Unfortunately, identification of the specific enterovirus strain was not possible due to laboratory limitations.
The distal dactylitis-like inflammatory process presented by the patient in the three referred fingers and shown in Fig. 2B is probably explained by local soft tissue enterovirus infection with necrosis and subsequent inflammation, which would also explain the insult to the nail matrix and ensuing delayed detachment of those specific nails. Nonetheless, to the best of the authors’ knowledge, these dactylitis-like inflammatory signs are an previously undescribed manifestation of HFMD.
With the increasing prevalence of coxsackie-A6 infection in the past few years and its association with disease in adults [4], HFMD has become a disease to be considered in the differential diagnosis when examining an adult with exanthematous fever or other clinical findings suggestive of a viral illness. Therefore, with this case report the authors emphasize the importance of awareness of the clinical presentation of this increasingly common infection in adults.