Conflicts of Interests: The authors declare there are no competing interests.
Acknowledgements: Gonçalo Miranda, Ana Catarina Dionísio and Constança Azevedo contributed equally to this work as first authors. This article is licensed under a Commons Attribution Non-Commercial 4.0 License

Emphysematous hepatitis is a rare entity characterized by the replacement of hepatic parenchyma by gas, leading to acute liver failure. Often it occurs in patients with diabetes mellitus, liver disease or a recent history of abdominal surgery. We present a case of emphysematous hepatitis in a 74-year-old man with no recognizable risk factors. Despite the early broad-spectrum antimicrobial therapy and supportive care, the condition progressed to a fatal outcome, as seen in other case reports. Early recognition of this condition and rapid and aggressive management may improve patient outcomes. 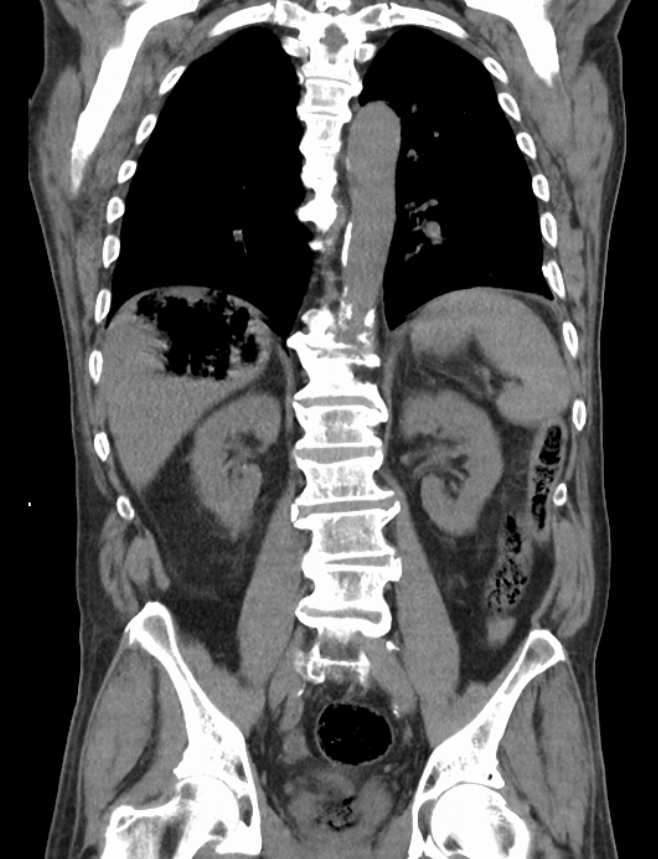 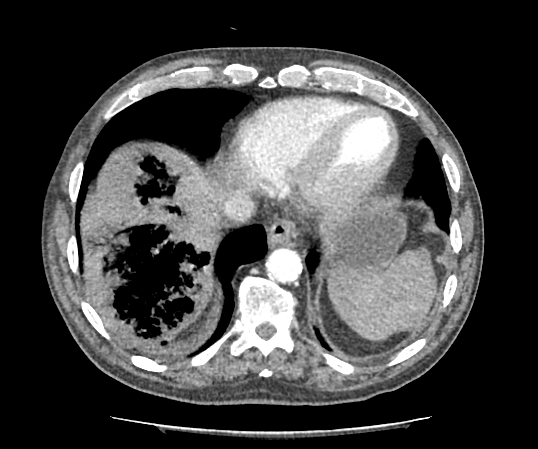 On the second day of admission, his clinical state deteriorated along with blood analysis; the antimicrobial spectrum was extended and he was commenced on vancomycin, metronidazole, and fluconazole. Despite these measures, his condition evolved to multiorgan failure and he died on the third day of admission. The decision for autopsy was deterred due to lack of consent. Blood cultures subsequently grew multi-sensitive Escherichia coli.

Emphysematous infections of the abdominal organs have long been recognized and are potentially life-threatening conditions. The presence of gas within the liver can be due to a variety of causes, often including liver abscesses, iatrogenic causes, and seldom infection by gas-forming bacteria[1].
Emphysematous hepatitis is a rare condition characterized by replacement of hepatic parenchyma by gas often followed by a fulminant inflammation of the liver leading to acute liver failure, as seen in patients with risk factors such as diabetes mellitus and liver disease[1–4] or a recent history of abdominal surgery[2–5]. In contrast to the other cases reported, our patient had no recognizable risk factors. Gas formation might develop in the setting of gas-forming infection, high tissue glucose level, and impaired transportation of gas by vascular compromise. Mixed acid fermentation from tissue necrosis by bacteria produce nitrogen, hydrogen, carbon dioxide, and oxygen, resulting in gas accumulation[1]. In our patient, Escherichia coli was isolated, indicating that this was the microorganism responsible for the infection and the emphysematous infiltration of the liver. Clinical manifestations are usually subtle at the beginning and progress rapidly, as seen in other reported cases[1–5]. Our patient complained of fever and abdominal pain for 2 days and was admitted with altered mental status, rapidly progressing to septic shock. The diagnosis of emphysematous hepatitis requires abdominal imaging, preferably a contrast-enhanced CT scan. Gas within the liver is usually evident but pyogenic liver abscesses should be ruled out.
Management of this condition usually involves parenteral broad-spectrum antibiotics and drainage of the collection. In all reported cases early broad-spectrum antibiotics were commenced but drainage was not always attempted either because it seemed futile[3] or the hemodynamic status of the patient did not permit it[4]. In our patient, drainage was not attempted because it seemed futile and the patient’s condition deteriorated so rapidly that the procedure could not be safely performed.
Emphysematous hepatitis continues to be difficult to manage and despite aggressive measures the condition progresses to a fatal outcome in the first days of admission, as seen in our case and other reported cases. We encourage the use of aggressive early therapeutic measures in patients with emphysematous hepatitis in order to control the infection.