Patients with Strongyloides stercoralis infections are usually asymptomatic but massive hyperinfection may occur in patients with diseases associated with abnormal cell-mediated immunity or receiving immunosuppressive therapy.
The authors present the clinical case of a 49-year-old man with a history of diarrhoea and cramping abdominal pain, generalized oedema, petechial rash, melanoderma, cough and dyspnoea. He presented hypokalaemia and arterial hypertension and was admitted with the diagnostic hypothesis of Cushing’s syndrome or adrenocorticotropic hormone ectopic production. The patient developed respiratory failure associated with bilateral lung opacities and was admitted to the Intensive Care Unit. The abdominal computed tomography scan revealed liver and duodenal masses. The duodenal biopsy showed the presence of Strongyloides stercoralis and the liver biopsy showed the presence of small cell neuroendocrine carcinoma. The patient died 50 days after hospital admission. The high level of endogenous cortisol observed in this patient may have facilitated the progression to severe fatal infection.

A 49-year-old, leucodermal man presented to the emergency department for non-specific malaise and a feeling of postprandial infarction. He reported colic-like abdominal pain and bloodless diarrhoea (approximately 5 evacuations/day) for 2 months. He complained of asthenia, oedema of the lower limbs and face, polydipsia (2–3 l/day), polyuria and cutaneous trunk and face hyperpigmentation of approximately 1 month’s evolution. He had a non-productive cough, reported no recent weight changes and had hypertension being treated with lisinopril and furosemide. The patient’s personal tobacco history encompassed a 36 pack-year consumption; he also had a slight alcohol habit (23 g alcohol/day), dyslipidaemia and hyperuricaemia, treated on an outpatient basis with a statin and colchicine. The patient had temporarily lived in Brazil, Angola and Guinea for over 10 years due to his activities as an air force military officer.
Objective examination revealed mild melanoderma and apyrexia. The patient was conscious and temporally and spatially oriented. He weighed 96.6 kg, with a height of 192 cm and a body mass index of 26.2 kg/m2. Cardiac auscultation revealed no changes while pulmonary auscultation revealed bilateral wheezing and snoring. Blood pressure was 196/76 mmHg and symmetrical soft oedema of the lower limbs was observed. No palpable adenopathies were detectable.
Laboratory tests (Table 1) revealed severe metabolic alkalosis and hypokalaemia, and moderate hypoxaemia (oxygen partial pressure/inspired oxygen fraction, PaO2/FiO2, ratio equal to 210 mmHg). Serum adrenocorticotropic hormone (ACTH) and urinary cortisol levels were elevated.
A chest x-ray showed bilateral pulmonary opacity that was more exuberant on the right side, and renal and suprarenal ultrasonographic examination was normal. 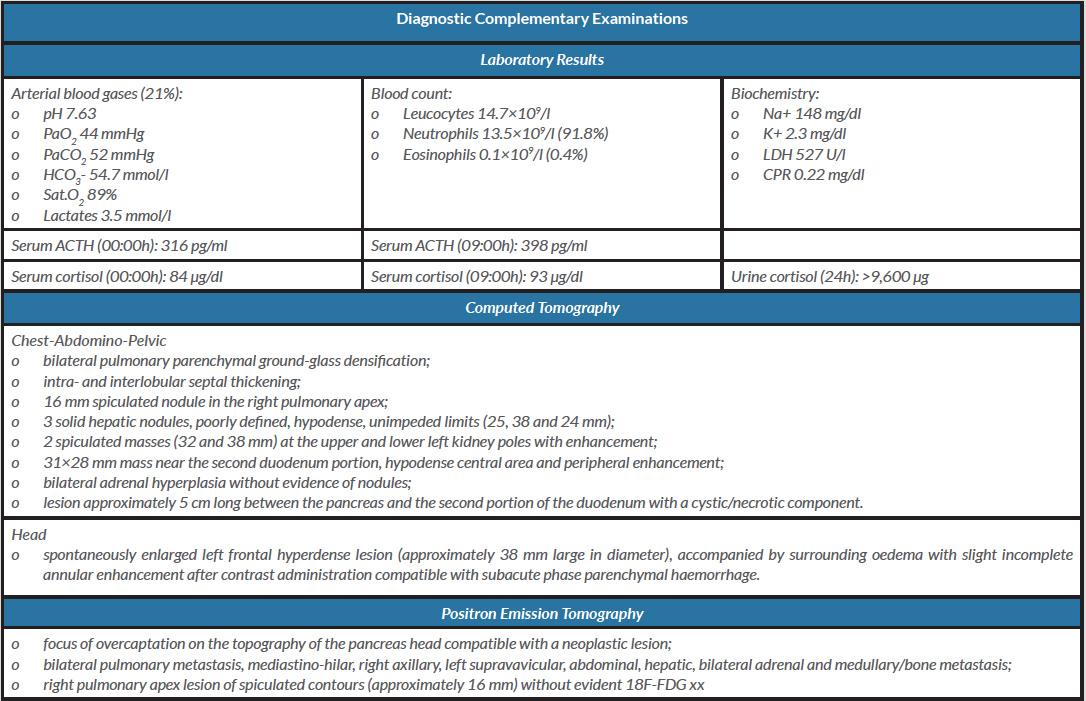 The patient was admitted to the Endocrinology Department, with diagnostic hypotheses of Cushing's syndrome or ectopic ACTH production. Due to the progression of acute respiratory failure (PaO2/FiO2 of 121 mmHg), he was admitted to the Intensive Care Unit (ICU) on the second day of hospitalization, with the diagnosis of community-acquired pneumonia, requiring invasive mechanical ventilation. The patient was empirically medicated with ceftriaxone 1 g bid and azithromycin 500 mg once daily, intravenously. Urinary screening for urinary antigens from Legionella pneumophila and Streptococcus pneumoniae was negative. Multiple polymerase chain reaction tests for gastroenteritis were negative.
Upper digestive endoscopy showed swollen duodenal folds that were biopsied; microscopic examination (Fig. 1) showed inflammatory lamina propria infiltrate with eosinophils and the presence of larvae and eggs of parasitic structures compatible with Strongyloides stercoralis .
Ultrasound-guided liver biopsy revealed metastasis of small cell neuroendocrine carcinoma with an immunohistochemical profile suggesting pulmonary origin. The patient was treated with ivermectin for 20 days (including 2 weeks after negative parasitological tests). During hospitalization at the ICU, in addition to haemodynamic and ventilatory support, he was on etomidate and metyrapone therapy to control hypercortisolism. On the 22nd day of hospitalization in the ICU, he underwent a tracheostomy for difficult weaning. He was transferred to the Pulmonology Department on the 35th day of hospitalization and the patient died 15 days later. 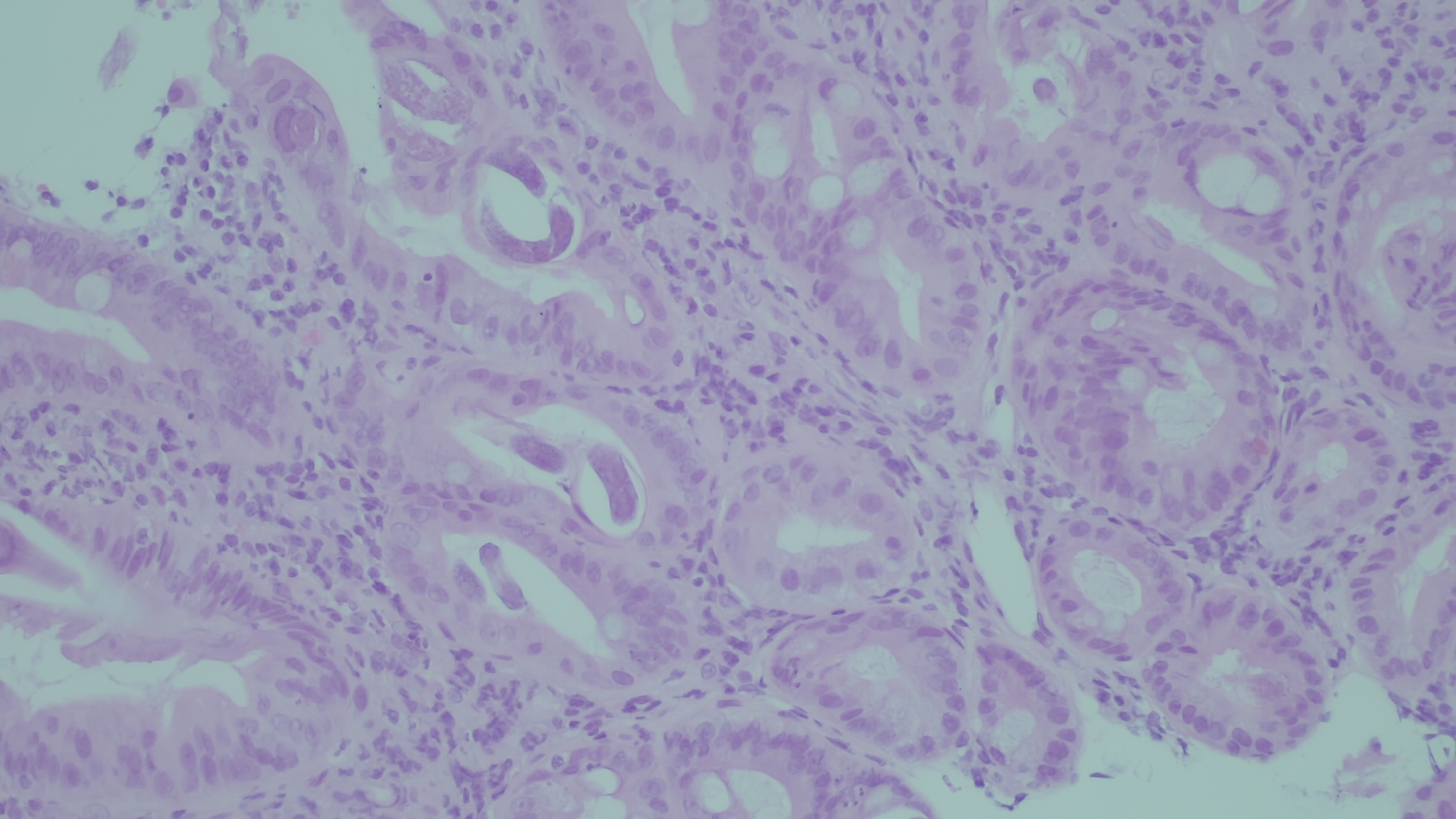 Strongyloides stercoralis infection is an endemic parasitosis in tropical and subtropical climate regions, namely Africa, Southeast Asia and Latin America, where humidity and temperature climatic conditions allow the development and survival of this parasite [1].
The presentation form (Table 2) and the evolution of this infection is determined by the interaction between the host and the parasite. Patients with Strongyloides stercoralis infection are usually asymptomatic. However, in patients with immunosuppression, this parasite can cause serious life-threatening clinical conditions – hyperinfection or disseminated disease.

In widespread forms of the disease, the larvae can be isolated from almost all organs and tissues. Their migration allows the translocation of Gram-negative bacilli from the intestinal wall that can cause respiratory, central nervous system and sepsis. Mortality is approximately 15% in hyperinfection and can reach 85% in disseminated forms. Fatality occurs in untreated cases [2].
In the case described here, severe melanoderma, arterial hypertension, metabolic alkalosis and hypokalaemia suggested a diagnosis of hypercortisolism, which would later be confirmed by laboratory tests.
The pathophysiology that links hypercortisolism with hyperinfection and disseminated disease associated with Strongyloides is not clear. However, the action of corticosteroids to reduce eosinophil numbers and lymphocyte activation may be an explanation. In laboratory controls performed 2 months and 2 years earlier, the patient presented eosinophilia of 8.4% and 7.2%, respectively. At the current hospital admission, the patient showed 0.4% eosinophils (0.1×109/l). This patient had lived in areas endemic for Strongyloides for over a decade, suggesting a potentially hidden and persistent infection for more than 10 years. The self-infection phenomenon may have been triggered by reduced immune capacity.
Some authors have suggested that corticosteroids may induce an increase in the production of larval infective forms, mediated by a significant increase in ecdysteroids in the intestinal wall [3]. Impaired immunity, by bringing about parasitic overcrowding, facilitates the migration of the infecting larvae to sites outside their life cycle, namely the meninges, brain, liver, kidneys, lymph nodes, skin and subcutaneous tissues. Invasion is accompanied by exuberant inflammation and can be complicated by local bleeding. In the present case, the existence of cerebral intraparenchymal haemorrhage, in the absence of other obvious aetiologies, probably indicates the presence of Strongyloides cerebral invasion, although this is difficult to prove.
In this patient, parasitic investigation using different culture media was negative after treatment with ivermectin 200 µg/kg/day. As recommended in the medical literature for treatment of Strongyloides hyperinfection in a severely immunocompromised host with sepsis or meningitis, therapy was continued for an additional period of 15 days after negative testing.
Positron emission tomography (PET) (Table 1) revealed diffuse metastasis of carcinoma, with the likely primary lesion in the head of the pancreas.
It is noteworthy that the patient lived in a non-endemic area for more than 10 years, had no eosinophilia and initial parasitological stool tests were negative, although stool tests may be negative in more than 70% of cases [4]. The immunosuppressive condition that the patient developed, which eventually determined his final course, led to the spread of Strongyloides stercoralis infection.
Of note, this case report highlights the importance of individual immune factors in the balance between the human ecosystem and its biome, and draws attention to the need to consider Strongyloides stercoralis infection in the differential diagnosis of multiorgan infection in immunocompromised patients with an appropriate clinical and epidemiological context.