Cardiovascular involvement by Leptospira is unusual. We report a case of a 29-year-old male sanitation worker who was diagnosed with leptospirosis (PCR testing for Leptospira spp. was positive in blood and urine). He had no classical clinical findings, and the presence of shock was the main worrisome finding. Within 24 hours of admission, the emergence of chest pain led us to consider cardiac involvement, which was demonstrated by diffuse supra-ST segment elevation, elevated troponin and NT-proBNP and an echocardiogram showing mildly left ventricular ejection fraction (LVEF 48–50%). There are several reports of cardiovascular involvement in severe leptospirosis but most patients are asymptomatic. In this case, the main key to diagnosis of perimyocarditis was the new onset of chest pain.

A 29-year-old male Azorean sanitation worker with no relevant past medical history presented to the Emergency Department (ED) complaining of high fever, myalgias and severe bilateral calf pain that began the week prior. Vital signs in the ED were notable for a temperature of 38ºC, a pulse of 130 beats per minute and blood pressure of 88/54 mmHg. The patient was alert and oriented and upon physical examination there were no significant findings.
Initial laboratory test results were notable for leucocytosis (15.7 × 103/uL) with left shift deviation and high C-reactive protein levels (17.25 mg/dL). There was no kidney or liver injury, cholestatic pattern or rhabdomyolysis. Chest radiography and arterial blood gas testing were normal.
Samples for blood cultures and molecular testing were obtained and ceftriaxone was started. The initial fluid resuscitation failed to improve hypotension and norepinephrine was initiated. The patient was admitted to the Intermediate Care Unit (IMCU).
On the first day, the patient described intense pleuritic chest tightness. The electrocardiogram showed diffuse supra-ST segment elevation of DI, DII, V4, V5, V6 (Fig. 1), and his laboratory tests showed elevated troponin I (18.9 µg/L) and NT-proBNP (3583 pg/mL); the chest x-ray was normal. A cardiovascular assessment with echocardiogram (echo) was performed showing mildly depressed systolic function (LVEF 48–50%) without a segmental pattern and no pericardial effusion.
All these signs and symptoms, associated with confirmation by polymerase chain reaction assessment of Leptospira DNA in blood and urine, made us think that we had in front of us a rare manifestation of leptospirosis, perimyocarditis.
The patient recovered completely with supportive care and antibiotics and after stabilization was transferred to our Department. He received ceftriaxone for 7 days and was started on ramipril. On the day of discharge, troponin I was normalized. Cardiac magnetic resonance imaging (CMR) at the 3-month follow-up showed recovery without ventricular dysfunction and no signs of inflammation/scarring. 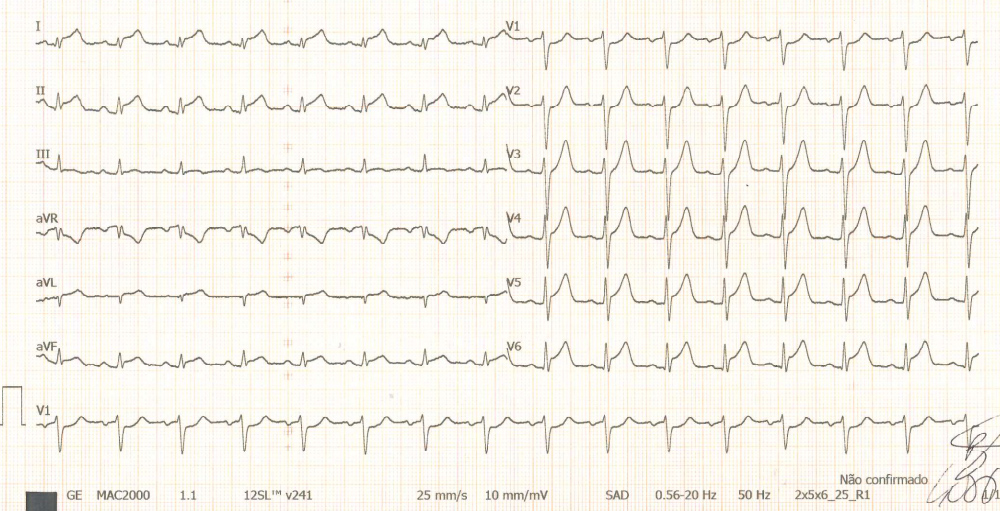 The Azores, a group of nine inhabited Portuguese islands in the North Atlantic Ocean, have been known for the endemicity of leptospirosis since 1993[1]. The classical untreated disease is described as a biphasic illness with an initial acute leptospiremic phase followed by an immune phase. Most cases are self-limited, but some patients develop fatal complications with severe disease[2].
Involvement of the cardiovascular system is an important complication of leptospirosis, but the exact incidence is unknown. The manifestations are seldom observed in milder forms of the disease[3].
As so, we report this case due to its unusual presentation (lack of classical clinical findings of jaundice, renal failure, pulmonary haemorrhage) and myocardial involvement. The epidemiological context was essential to perform the diagnosis. The most striking feature was the shock possibly caused by the septic process, but the emergence of chest pain was critical to ascertaining cardiac involvement.
The European Society of Cardiology Working Group on Myocardial and Pericardial Diseases has developed clinical and diagnostic criteria for myocarditis, such as the presence of chest pain, positive tests for cardiac troponins and variable ECG changes[2]. CMR has become the primary tool for non-invasive assessment of myocardial inflammation in patients with suspected myocarditis[4].
In our case, there was no histological confirmation nor was CMR carried out in the acute phase due to geographic limitations; however, CMR at follow-up was useful to differentiate uncomplicated involvement of the myocardium in a systemic illness from a complicated course with viral or bacterial persistence or autoimmunologic disease.