Conflicts of Interests: The authors declare there are no competing interests.
Acknowledgments: The authors would like to thank all the members of the medical and paramedical team who took care of this patient. We also wish to thank the toxicology laboratory for analysis of the copper powder.
This article is licensed under a Commons Attribution Non-Commercial 4.0 License

Background: Copper is an essential trace element of the human body. However, it is related to many diseases. Copper intoxication is not common in Western countries, but needs to be rapidly recognised because of its high lethality.
Case presentation: We report the case of a 40-year-old woman who presented to the emergency department after performing intrarectal administration of a blue powder sent from Cameroon by her family, in the belief that this would help her to get pregnant. Her evolution was complicated by multiorgan failure and the unusual circumstances. The diagnosis was suspected on the basis of the clinical presentation and the colour of the powder, and confirmed by blood dosage and toxicological analysis of the powder. She underwent symptomatic treatment, and the outcome was progressively favourable, apart from persistent chronic renal failure with dependence on dialysis.
Conclusion: Copper intoxications are rare but severe. Laboratory diagnosis of the condition is not an issue; the difficulty is suspecting it and quickly initiating chelation treatment associated with symptomatic treatments.

We report the case of a 40-year-old female patient who presented to the emergency room with diarrhoea, abdominal pain and anuria, 48 hours after performing a rectal enema using a blue powder sent from Cameroon, in the belief that this would help her get pregnant. She had a one-year history of HIV infection, well controlled with antiretrovirals, without any episode of opportunistic infection, as well as secondary infertility related to uterine myomas.
On arrival, she was conscious and haemodynamically stable. She was fitted with a urinary catheter, which yielded only a few millilitres of “port-coloured” urine. 6 hours after arrival, O2 saturation on pulse oximetry dropped to 74% without breathlessness. Her pulmonary examination was normal. Arterial blood gas analysis at that time showed: pH 7.18, PO2 70 mmHg, pCO2 30 mmHg, HCO3- 11.2 mmol/L and SpO2 99% (Fig. 1).
Methemoglobinaemia level was 13% and explained the saturation gap. Otherwise, the laboratory tests gave the following findings: creatinine 612 µmol/L, urea 22.7 mmol/L, Na+ 128 mmol/L, WBC 47G/L (neutrophil count 37G/L), Hb 12.3g/dL, CPK 3427 UI/L, bilirubin 73 µmol/L, ultra-sensitive troponine 2,380 µg/L, CRP 186 mg/L, PCT 14 µg/L. The laboratory called us to warn us that the blood was black and viscous, and that they could not give us the results for potassium levels, hepatic enzymes, the balance of haemostasis and the detail of bilirubin.
The patient was admitted to the ICU. We began a treatment with high-flow nasal oxygen and intermittent haemodialysis. MetHb rose to 23% and we used one dose of methylene blue. 48 hours later, she developed brutal anaemia to 4.2g/dL due to massive haemolysis (hyperbilirubinaemia, high LDH level, normal haptoglobin, and positive Coombs test, IgG 1+). There was no glucose-6-phosphate dehydrogenase (G6PD) deficiency. The troponin level also continued to rise, without any echocardiographic abnormalities. She was treated with 8 packed red blood cell transfusions, and received an 80 mg dose of methylprednisolone due to suspicion of autoimmune haemolytic anaemia, but this hypothesis was abandoned after consultation with the regional expert centre in autoimmune cytopenia.
72 hours after admission, the patient suffered a 2-minute long cardiac arrest, recovering after 8 minutes of cardiac massage, 1 mg IV adrenaline and mechanical ventilation. Cardiac ultrasound revealed an enlarged right ventricle and paradoxical septum, but left ventricular function was preserved. A thoracic angioscan excluded a pulmonary embolism. The diagnosis reached was toxic myocarditis. Dobutamine infusion and nitric oxide therapy were necessary for 24 hours (Fig. 1).
About a week later, analysis of the powder she had taken revealed that it was pentahydrated copper sulphate.
The patient’s blood copper level at day 6 after ingestion was 25 mcmol/L (1.59 mg/L, N 11-20 mcmol/L).
She was extubated on day 15 of hospitalisation. She recovered diuresis of about 250 cc per day but has persistent chronic renal failure and requires haemodialysis three times a week. 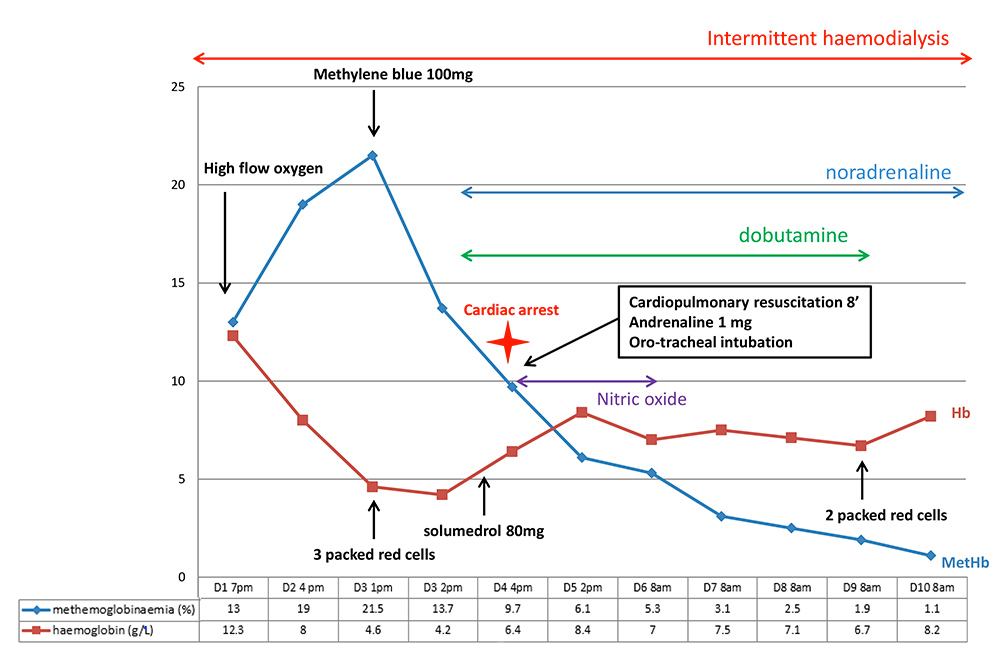 Figure 1. Main events and elements of medical care during the first ten days

Copper sulphate poisoning is a rare but often fatal intoxication, mainly related to suicide attempts. The substance is often taken orally. Our patient is uncommon because of the reason for taking it (trying to get pregnant) and the route of administration used (intra rectal).

Copper physiology and physiopathology in the human body

Copper is a trace element essential for human life. The total body content of copper is 150 mg. Copper is distributed in the tissues, with higher concentrations in the heart, muscles, brain, kidneys and liver[1]. It is the cofactor of many human enzymes, and copper deficiency or overload is the cause of many pathologies (Wilson's disease, familial forms of Alzheimer's disease, Creutzfeld-Jacob's encephalitis)[2].
Ingested copper first has a hepatic passage, then binds in the blood to the ceruloplasmin at about 90%. The free form of copper, weakly bound to albumin, is the toxic form and increases during copper intoxication. It is responsible for cell damage. Indeed, copper has an oxidising effect with formation of free radicals, and it also inhibits certain enzymes including G6PD. It is eliminated mainly (>70%) by the liver through the bile, although a small part is eliminated by the kidneys (<5%)[1].
Copper sulphate has not always been known for its toxic properties: it has been used for a long time in the debridement of wounds because of its antiseptic properties, and as an emetic agent in intoxications. It is still contained in certain dental cements or intrauterine devices[3]. Many domestic and industrial products contain copper, but poisoning is rare, and fortunately often limited to gastrointestinal disease. Nevertheless, some cases may be fatal with mortality rates of up to 23% [4].
The most common route of intoxication is oral. Nevertheless, intravenous, cutaneous via wounds, and even intra-uterine (for abortion) routes have been reported[5,6]. To our knowledge, our patient is the first case of rectal intoxication. Moreover, the reason for intoxication (in order to become pregnant) differs from the usual reasons reported in the literature (suicide attempts, accidental intoxication).

The clinical spectrum of copper poisoning is summarised in Figure 2. 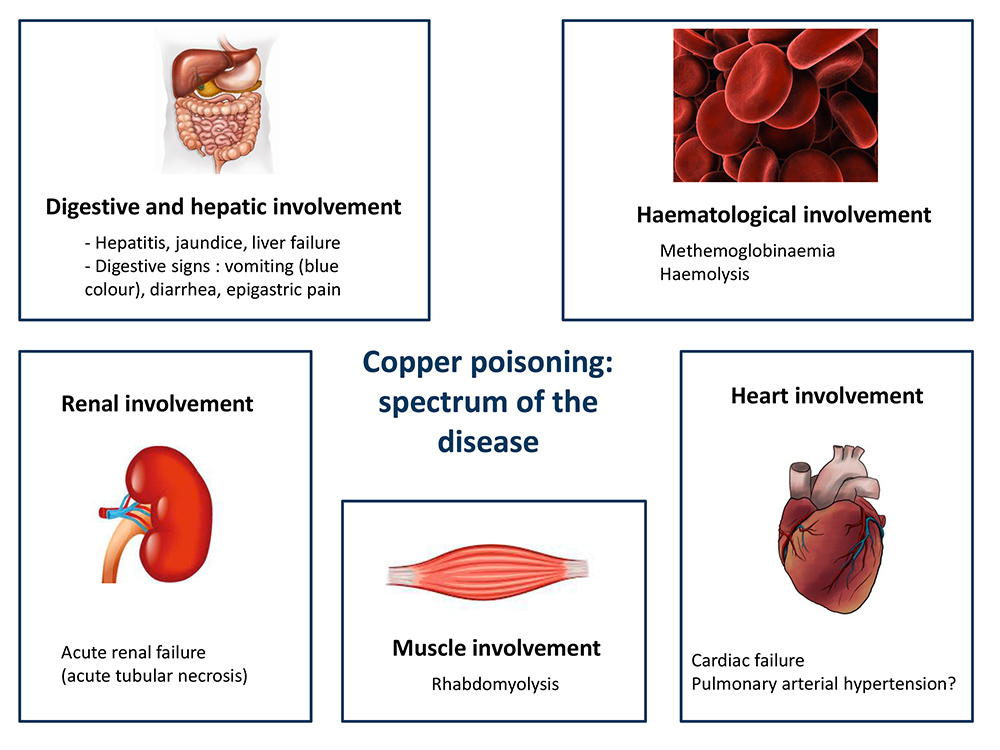 The first and most frequent (80-100%) symptom of copper poisoning is digestive [7]. It begins with vomiting, epigastric pain or diarrhoea. A characteristic sign is bluish vomiting [8].
Copper, which is toxic to intestinal mucosal cells, can cause ulcerations responsible for haematemesis and melena, with haemorrhagic or hypovolaemic shock. In our case, rectal administration may explain the presence of diarrhoea only at admission.
Copper then passes to the liver where it is particularly toxic to hepatocytes. One study has shown a correlation between the level of hepatic cytolysis and mortality[4]. Copper hepatotoxicity causes acute hepatitis and jaundice, and can lead to death from liver failure.

Haemolysis is also a frequent manifestation, related to the accumulation of copper in red blood cells. It is related to both the direct cellular toxicity of copper, and the inhibition of the enzymes responsible for protecting the red blood cells against oxidative stress (mainly G6PD and glutathione reductase)[9,10]. The presentation of our case was quite uncommon: haemolysis occurred at day 4 following intake, whereas it is usually described within 12 to 24 hours after intoxication[1].
Not all the criteria for toxic haemolysis were met: haptoglobin was normal, and Coombs test was positive. However, we did not find any other aetiology for this brutal anaemia, in particular, no external evidence of gastrointestinal bleeding.

Rhabdomyolysis is a rare complication of copper sulphate poisoning[1]. It has also been described in Wilson’s disease[11]. The mechanism is thought to be related to copper inactivation of the Na+ / K+ ATPase pump, resulting in increased cell permeability in human musculoskeletal cells[12].

About 40% of cases of acute copper sulphate poisoning are complicated by acute renal failure (ARF)[13].
The condition is caused by acute tubular necrosis, linked to several factors: myoglobinuria, haemoglobinuria, direct toxicity of cupper and hypovolaemia related to digestive symptoms. The advent of haemodialysis has reduced ARF-related mortality[4].
However, in our case, renal function was never recovered, which may suggest a more complex mechanism with definitive lesions in the kidney.

Methemoglobin is haemoglobin in which oxidised iron has been transformed from the ferrous state (Fe ++) to the ferric state (Fe +++), which renders it unfit for oxygen transportation. Two main erythrocyte enzymatic systems are involved in the reduction of physiologically produced methemoglobin (Fig. 3): Methemoglobinaemia is asymptomatic below 10%. Above these levels, the following will gradually appear: cyanosis and brown blood staining, signs of hypoxia, neurological signs and death.
Copper sulphate poisoning is a rare cause of methemoglobinemia. Poisoning with dapsone or with amyl-nitrites through the use of poppers are more famous causes[15].

Copper intoxication can be diagnosed through direct analysis of the substance, if available, as was the case in our patient. It can also be done by measuring blood copper level, although this decreases rapidly after ingestion[7], and is not related to the severity of the prognosis[4,17].
Once the diagnosis is made, the treatment is based on the administration of copper chelators, although these have not been proven to be effective, symptomatic treatment of malfunctions (including dialysis during renal failure), methylene blue and high-dose oxygen administration in cases of symptomatic methemoglobinemia. The available chelators are D-penicillamine, dimercaprol and edentate calcium diphosphore (EDTA). These treatments can chelate copper and promote its elimination through the urinary tract. We did not use them because our patient was anuric. Nevertheless, they have already been successfully used in some cases reported to be anuric[18]. The rationale for this use was that haemodialysis can filter copper-bound chelators. Haemodialysis alone has not proven to be effective in purifying copper sulphate[19], which first binds to plasma proteins in the blood, and is then rapidly stored in liver, muscle and erythrocyte cells[4].
The literature also reports cases successfully treated with plasmapheresis[20] and more recently the use of veno-venous extracorporeal membrane oxygenation (ECMO) for treatment of acute respiratory distress syndrome secondary to copper sulphate poisoning[21].
To conclude, copper poisoning remains rare, especially in Western countries, but it causes significant mortality and morbidity. It must be quickly recognised despite its polymorphic presentation, in order to quickly establish appropriate treatment and anticipate its numerous complications. This treatment is based on chelators and symptomatic treatment, and requires a suitable technical platform including haemodialysis, mechanical ventilation and even sometimes plasma exchanges or ECMO.