Brugada phenocopies (BrP) are clinical entities that present with an ECG pattern identical to either the type 1 or type 2 Brugada pattern without true congenital Brugada syndrome. This ECG pattern is associated with an identifiable condition and normalizes upon resolution or treatment of the underlying cause. We present a case of a 54-year-old man with extreme metabolic acidosis, hyperkalaemia and a Brugada type 1 ECG pattern in the setting of a suicidal methanol (MeOH) poisoning. Upon correction of these metabolic derangements with bicarbonate infusions and continuous veno-venous haemodiafiltration (CVVH), the Brugada type 1 ECG pattern normalized. Unfortunately, the patient developed signs of cerebral herniation followed by brain death and died on the first day of ICU admission.

A 54-year-old man with a past history of hepatitis B and alcohol abuse in a Rehabilitation Centre was brought to our emergency department by his colleagues after being found in a comatose state. On admission, his Glasgow Coma Scale (GCS) score was 6 and physical examination disclosed Kussmaul’s respiration. A CT scan was normal. The patient was intubated for airway protection and was transferred to the intensive care unit (ICU). On ICU admission, his GCS score decreased to 4 with decerebrate posturing and generalized tonic-clonic seizures requiring 2 doses of intravenous diazepam. Auscultation of the lungs was normal. Blood pressure registered via a radial catheter was 60/30 mmHg with poor peripheral perfusion. Transthoracic echocardiography showed hyperkinetic ventricles with normal diastolic and valvular function. The initial 12-lead ECG demonstrated an irregular rhythm with no clearly visible P waves and coved-type rectilinear-sloping ST-segment elevation in leads V1 and V2 as well as an elevated J-point in leads V3 and V4 consistent with the Brugada type 1 pattern (Fig. 1). Laboratory results showed a severe metabolic acidosis with a HCO3- of 5.4 mmol/l and a pH of 6.60. The serum osmolality was 414 mOsm/kg, Na+ 144 mmol/l, K+ 6.7 mmol/l, urea 7.6 mmol/l, glucose 16.4 mmol/l, Cl- 103 mmol/l and lactate 12.9 mmol/l. The anion and osmolal gaps were calculated:
Anion gap: ([Na] + [K]) – ([Cl] + [HCO3]) = (144 + 6.7) – (103 + 5.4) = 42.3 mmol/l (normal value: 14±4 mmol/l)
Osmolal gap: Serum osmol – (1.86 (Na + K) + glucose + urea + 10) = 414 – 314.3 = 99.7 mOsm/kg (normal value: <10 mOsm/kg)
Due to the suspicious circumstances and severe metabolic acidosis with extremely enhanced anion and osmolal gaps, methanol (MeOH) or ethylene glycol intoxication was suspected and a serum toxicologic screen was ordered. Correction of acidosis was initiated with bicarbonate infusions and shortly after with continuous veno-venous haemodiafiltration (CVVH) and therapy with intravenous thiamine, pyridoxine, folic acid and ethanol was instituted. Fluid resuscitation and a noradrenaline infusion improved haemodynamic parameters. After amelioration of metabolic acidosis (pH 6.97, HCO3- 11 mmol/l) and correction of hyperkalaemia in 6 hours, the 12-lead ECG showed resolution of the Brugada type 1 pattern (Fig. 2). Unfortunately, the patient remained in a coma state evolving to brain death and died on the first day of the ICU stay. The serum MeOH concentration was 298.2 mg/dl (NV <5 mg/dl). 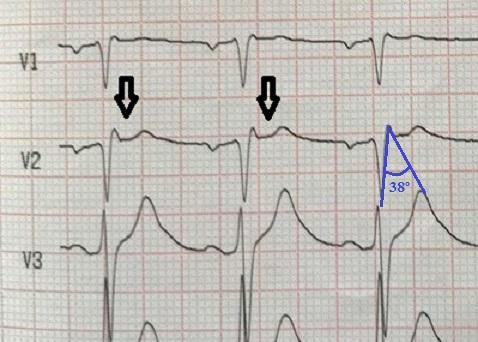 “Brugada phenocopy” was a term initially proposed by Riera et al.[1] to describe an acquired Brugada-like ECG pattern in the setting of propofol infusion syndrome. The term “phenocopy” describes “an environmental condition that imitates one produced by a gene”. Brugada phenocopies (BrP) are clinical entities that present with identical ECG patterns to those of true Brugada syndrome (BrS); the ECG pattern normalizes once the underlying condition is treated or resolves. BrP constitute a group of heterogeneous conditions that have been characterized into 6 distinct aetiological categories: metabolic conditions, mechanical compression, ischaemia, myocardial and pericardial disease, ECG modulation and miscellaneous causes[2]. Seven criteria are used to differentiate BrP from BrS, of which 5 are mandatory for BrP diagnosis[3].
Metabolic abnormalities are among the underlying conditions of BrP in normal subjects. Several reports exist in the literature of BrP occurring in relation to various metabolic derangements such as glucose[4] and glucose/insulin challenge[5], isolated hyperkalaemia[6] or in association with other metabolic disturbances including extreme hyperglycaemia, hyponatraemia and acidosis[7]. The physiopathological mechanisms by which these extreme electrolyte imbalances induce BrP are not well known. Hyperkalaemia may reproduce BrP by decreasing the resting membrane potential causing an indirect inactivation of Na+ channels[8].
Although ethanol is reported in the literature as a possible trigger for BrS[9], ventricular fibrillation in BrS or BrP due to its inhibitory effect on cardiac single sodium channel gating[10], we have not found any medical evidence linking MeOH intoxication with BrP. Given that ethanol and MeOH share similarities in physicochemical structure, it could be speculated that the latter could trigger a Brugada phenocopy by mechanisms similar to ethanol. In our patient, correction of hyperkalaemia, amelioration of metabolic acidosis and treatment of MeOH intoxication led to normalization of the Brugada ECG pattern allowing us to infer a direct association between these “environmental factors” and the pathological ECG tracing. Unfortunately, due to the early death of the patient, we could not perform either provocative or genetic testing.