Conflicts of Interests: The authors declare there are no competing interests.
Acknowledgements:he Authors thank Maria Romero-Parra for her help.
This article is licensed under a Commons Attribution Non-Commercial 4.0 License

Cutaneous metastasis has a frequency of 1 to 10% among all metastatic cancer forms and breast cancer accounts for 30% of all cases. We report the case of a 73-year-old woman who presented with 4 skin lesions distributed across the upper trunk and abdomen; these had developed over a period of 12 months. Over the previous 6 months she had also developed anorexia, asthenia and weight loss. Upon investigation, a nodular mass was found in the left breast. Skin and breast mass biopsy were performed. Histology confirmed the diagnosis: infiltrating lobular breast cancer with cutaneous metastasis. The patient underwent hormonal treatment, mastectomy and radiotherapy.
In rare cases, cutaneous metastasis appears as the first clinical manifestation of breast cancer. It is therefore crucial for patients and health professionals alike to be aware of new skin lesions. Cutaneous metastasis is a diagnostic sign of cancer that, it must be emphasised, is not restricted exclusively to later forms of the disease.

We report the case of a 73-year-old woman with a history of hypertension and type 2 diabetes mellitus. She had no past or current history of smoking or alcoholism, and no relevant family history.
Presenting with asthenia, anorexia and weight loss, which had developed over 6 months, she was referred to an outpatient internal medicine facility.
The patient expressed concern about 4 skin lesions, present for more than a year. These were small, violet and scattered across the upper trunk and abdomen, with no other accompanying symptoms (Fig. 1). Her attending physician had suspected a skin infection or allergic reaction and prescribed topical antifungal and corticosteroid medication without any remarkable effect.
In addition to the six-month history of asthenia, anorexia and weight loss (20% of her body weight), she also reported bouts of diarrhoea and abdominal pain.
On examination, she was found to have a body mass index of 23.4 kg/m2; she had bleached mucous membranes and four erythematous, violet annular plaque lesions measuring between 1 and 4 cm – one in the right anterior axillary region (Fig. 2), two in the right inframammary region and one in the umbilical region. Breast examination revealed a 2 cm nodular mass in the external lower quadrant of the left breast. No adenomegalies were observable. A dermatology specialist was asked to observe the lesions, having first performed a skin biopsy. The differential diagnosis included cutaneous lymphoma, Jessner's lymphocytic infiltrate, specific leukocyte infiltrate and cutaneous metastasis. 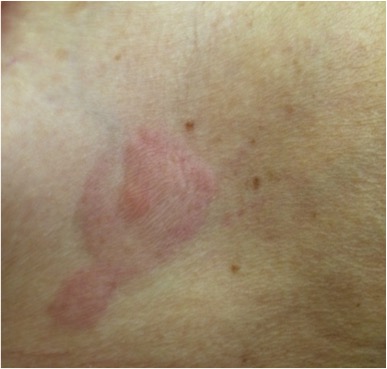 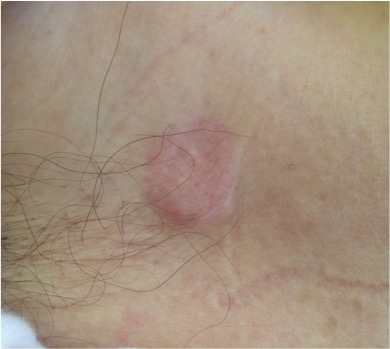 The patient underwent breast ultrasound and mammography, which confirmed the presence of a heterogeneous nodular lesion, with a maximum diameter of about 2 cm, in the lower external quadrant of the left breast, and left axillary adenopathy. A biopsy was performed.
The remaining diagnostic examinations revealed anaemia with a haemoglobin level of 9.2 g/dl and an increased erythrocyte sedimentation rate (86 mm/h). Thoracic, abdominal and pelvic computed tomography (CT) imaging revealed mammary asymmetry due to higher density of the left breast and parietal thickening at the level of the gastric antrum and pylorus. Given the gastrointestinal complaints and CT scan findings, it was decided to perform an oesophagogastroduodenoscopy to evaluate possible gastric injury. This examination revealed the presence of erythema in the notch and gastric antrum. Biopsies were performed and Helicobacter pylori infection was identified, for which the patient was treated.
Histopathological examination of the skin biopsy showed dermal infiltration with all cells expressing CAM 5.2, containing oestrogen and progesterone receptors, and cells negative for c-erbB-2 ; these findings confirmed the diagnosis of CM from breast cancer The breast mass biopsy result confirmed the diagnosis of infiltrating lobular breast cancer with the following features: positive oestrogen and progesterone receptors, c-erbB-2 negative and Ki-67 positive in 25% of the cells, cadherin E negative and CK19 positive. Cytology of the left axillary adenopathy showed atypical cellularity (Fig. 3 and 4). Bone scintigraphy showed no bone lesions. 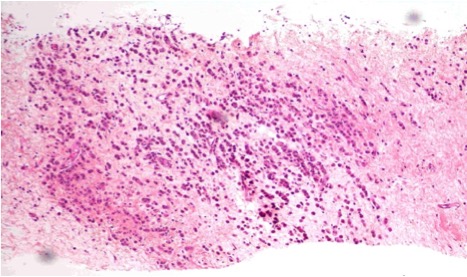 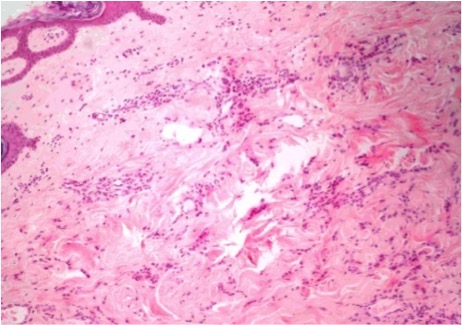 Figure 3. Breast cylinders with neoplastic infiltration
Figure 4. Skin with infiltration into the dermis by cords and atypical cells

The patient was referred to oncology with the diagnosis of infiltrating lobular breast cancer with CM, Bloom's grade II (T3; P2; M1) without other distant metastasis sites. The patient started letrozole hormone therapy, and underwent bilateral mastectomy with lymph node removal and radiotherapy.