Conflicts of Interests: The authors declare there are no competing interests.
Acknowledgements: We would like to thank Editage (www.editage.com) for English language editing.
This article is licensed under a Commons Attribution Non-Commercial 4.0 License

Thrombotic disease represents a rare manifestation of leprosy. In this study, we report the case of an external jugular vein thrombosis associated with tuberculoid leprosy in a 23-year-old male patient. The patient presented with a 3-month history of painful cord-like swelling on the left side of the neck and a nearly 3-week history of skin lesions on the left cheek and right leg. Physical examination revealed cord-like, tender swelling on the left lateral aspect of the neck overlying the sternocleidomastoid muscle, and a hypopigmented, hypoaesthetic 6×7 cm lesion with an irregular margin on the left cheek. A Doppler ultrasound examination of the jugular vein showed thrombosis of the left external jugular vein. Three-dimensional reconstruction of the computed tomography scan showed the enlarged and enhanced left external jugular vein, as well as 1 of its tributaries, and the thickened skin patch. A skin punch biopsy from the left cheek lesion revealed granulomatous inflammation with occasional peri-adnexal granulomas, consistent with the clinical impression of tuberculoid leprosy. A diagnosis of leprosy with external jugular vein thrombosis was established. Anticoagulation therapy was initiated, and the patient was referred to an infectious disease clinic for treatment with anti-leprosy medications.

Upper extremity deep vein thrombosis remains an important condition, with pulmonary embolism complicating approximately one-third of all cases. The most common causes of upper extremity thrombosis are central venous catheterization, infections, intravenous drug use, trauma, abdominal surgery, compression due to a tumour or the use of a collar and cuff for humeral fracture stabilization, vessel abnormalities, such as saccular aneurysms of the external jugular vein and Lemierre’s syndrome. There are several cases in the literature demonstrating an association between venous thrombosis and thalidomide used in the treatment of leprosy, particularly when used with steroids[1-6]; however, there has only been 1 case in the literature reporting an association between tuberculoid leprosy and external jugular vein thrombosis[7]. Therefore, we herein present the first case of tuberculoid leprosy associated with external jugular vein thrombosis in Qatar.

This study reports the case of a previously healthy 23-year-old Nepalese man who presented with a 3-month history of painful cord-like swelling on the left side of his neck, a 2-month history of right middle finger swelling, and a 20-day history of skin lesions on the left cheek and right leg. The patient did not report a history of fever, trauma, intravenous drug use, surgery, neck instrumentation or weight loss, and had no personal or family history of venous or arterial thrombosis.
Physical examination revealed the following: a hypopigmented, hypoaesthetic 6 × 7 cm lesion with an irregular margin on the left cheek; 2 tender cord-like, non-compressible swellings overlying the left sternocleidomastoid muscle (Fig. 1); swelling of the right middle finger associated with an electric shock-like sensation upon palpation; and a hypopigmented, hypoaesthetic skin lesion on the dorsum of the right leg. 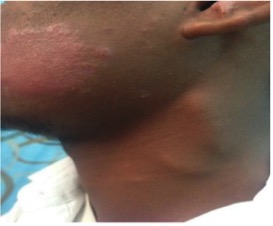 Figure 1. Hypopigmented patch on the left cheek and a cord-like swelling on the neck.

Furthermore, the pupils were of equal size and reactive to light, no motor deficits or sensory disturbances were observed (apart from the above-mentioned), and there were no palpable nerves. All other aspects of the systemic examination were unremarkable.
A Doppler ultrasound examination of the jugular vein showed thrombosis of the left external jugular vein, although the internal jugular veins on both sides showed normal flow. Furthermore, computed tomography scans of the head and neck were suggestive of left external jugular vein thrombosis (Figs. 2A and 2B), whereas computed tomography scans of the chest, abdomen and pelvis were unremarkable.

Laboratory findings revealed the following: white blood cell count of 7.3 × 109/l; haemoglobin concentration of 16.1 g/dl (haematocrit: 48.4%); platelet concentration of 290 × 109l; D-dimer concentration of 0.32 mg/l (normal concentration, <0.5 mg/l); prothrombin time of 10 sec (normal range, 7.8−10 sec); activated partial thromboplastin time of 28 sec (normal range, 25.3−33.8 sec); international normalized ratio of 1.1; protein C content of 93% (normal range, 70−140%); protein S content of 105% (normal range, 60−130%); antithrombin activity of 85% (normal range, 71− 16%); anticardiolipin antibody levels of <9.3 MPL (normal levels, IgG <15 MPL and IgM <12.5 MPL); and were negative for antinuclear antibodies.
A skin punch biopsy from the left cheek lesion revealed granulomatous inflammation with occasional peri-adnexal granulomas, consistent with the clinical impression of tuberculoid leprosy. However, biopsy cultures were negative for leprosy bacilli (Fig. 3 and 4).
The patient was diagnosed with leprosy associated with external jugular vein thrombosis. Anticoagulation therapy was initiated with enoxaparin 1 mg/kg twice daily subcutaneously and warfarin 5 mg/day, adjusted to achieve a target INR of 2–3, for a total of 3–6 months, according to the clinical response of the leprosy lesions to antibacterial therapy. The patient was then referred to an infectious disease clinic for the commencement of leprosy treatment with dapsone 100 mg daily and rifampicin 600 mg/day for 12 months. Unfortunately, the patient was lost to follow-up. 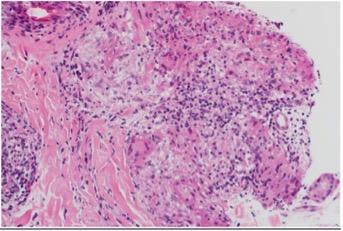 Leprosy is rare, and this is the first case of leprosy associated with external jugular vein thrombosis to be reported in Qatar. Leprosy is a disease that typically affects the skin and nerves. Vascular involvement in patients with leprosy is extremely rare, and is likely to occur secondary to involvement of the vasa nervorum blood vessels[8]. Intimal cell hyperplasia and vascular occlusion associated with lepromatous exudates were also observed in a small group study[9].
In a previous study that assessed venous system involvement in leprosy patients using venography and vein histological analyses, a perfect correlation between the histological and venography findings was found in 40% of patients with paucibacillary leprosy, and a good correlation was observed in 100% of the patients. In patients with multibacillary leprosy, a perfect correlation was found in 29.4% of the patients, a good correlation in 41.1% of the patients and no correlation in 29.4% of the patients[10]. A thorough literature search yielded only a single prior documented case of tuberculoid leprosy associated with external jugular vein thrombosis, which occurred with severe disseminated disease[11].
Virchow’s triad describes the factors contributing to venous thrombosis, which include hypercoagulability, stasis and endothelial injury[12]. Regarding hypercoagulability status, the patient did not report a personal or familial history of coagulation disorders. The diagnostic work-up included evaluation of protein C and protein S deficiencies, as well as antithrombin III deficiency. Anticardiolipin antibodies were used to determine possible antiphospholipid syndrome. The laboratory values were within normal limits.
The patient did not have a history of recent surgery, prolonged immobilization, trauma to the area, neck instrumentation or a malignancy that would increase blood stasis or endothelial injury.
This study demonstrated that leprosy should be considered in patients who present with skin lesions in association with thrombotic features. This study reports the first case of leprosy associated with external jugular vein thrombosis in Qatar. Therefore, venous thrombosis should be considered an important potential clinical manifestation of leprosy.