How to cite this article: Moriarty N, Moriarty J. Highlighting the link between Parkinson's disease and malignant melanoma: a case report and literature review. EJCRIM 2019;6 doi:10.12890/2019_001297.

Conflicts of Interests: The authors declare there are no competing interests.
Acknowledgements: I would like to thank Dr Brendan Moriarty, Dr Footitt (Consultant Neurologist), Alison Tonks and Dr John Young (Consultant Dermatologist) for their contributions towards the completion of this article.
This article is licensed under a Commons Attribution Non-Commercial 4.0 License

The aim of this case report and literature review is to explore the rarely highlighted co-occurrence of malignant melanoma and Parkinson’s disease (PD) and to describe the devastating effects on those affected. We present a case of acute confusion and worsening shuffling gait in a patient with Parkinson’s disease who eventually succumbed to metastatic malignant melanoma, secondary to a primary malignant melanoma on the back that was treated 6 years earlier. More research is needed to better characterize the associations between these two conditions, and to evaluate the effectiveness of prevention strategies such as melanoma screening for adults with PD.

The aim of this case report and literature review is to explore the rarely highlighted co-occurrence of malignant melanoma and Parkinson’s disease (PD). Several large epidemiological studies have established a link between the two conditions despite the fact that they seem to have nothing in common. PD is a neurodegenerative disease in which loss of dopaminergic neurons results in asymmetric motor symptoms, namely bradykinesia, rigidity and tremors, while melanoma is a malignant transformation of melanocytes in the skin and other organs. The lifetime risk of being diagnosed with PD in the United Kingdom is expected to increase by 23.9% (from 2.7% in 2015) by 2025. Malignant melanoma is the fifth most common cancer in the United Kingdom and accounts for 4% of all new cancer cases. Individually, both conditions can have a significant effect on those affected, but the co-occurrence of both diseases rapidly increases morbidity and mortality as evidenced by the case presented. Exploring this association allows us to consider potential implications such as the possibility of melanoma screening for patients with PD.

A 77-year-old man with a 12-year history of PD was admitted to the Geriatric Ward for new onset confusion over the last 2 days and worsening shuffling gait. He was compliant with his medications, namely co-beneldopa 125 mg tablets six times per day, ropinirole 16 mg tablets once daily and citalopram 20 mg once daily. His past medical history was significant for several dermatological malignancies with the following histopathological diagnoses:

The patient did not have a significant smoking or alcohol history, but he was retired from a job with a great deal of sun exposure. Most of his examination findings were normal, but significant neurological examination findings included a left homonymous hemianopia and features of Parkinsonism more pronounced in the right upper and lower limbs in keeping with PD. There was no associated weakness or sensory loss. On presentation he scored 8/10 on the Abbreviated Mental Test but his confusion progressively worsened with fewer lucid intervals. By the time he was discharged he no longer had the capacity to make decisions regarding his care.

The patient’s blood results were normal except for a normocytic normochromic anaemia. Computed tomography (CT) of the head demonstrated multiple enhancing brain lesions, likely metastatic deposits with an acute right occipital intracranial-axial haematoma (Fig. 1). Magnetic resonance imaging (MRI) of the head revealed in greater detail multiple lesions in both cerebral hemispheres and in the cerebellar vermis in keeping with melanoma deposits (Figs. 2 and 3). CT of the thorax, abdomen and pelvis revealed lung metastases and extensive bilateral calcified pleural plaques (Fig. 4). No intra-abdominal malignancy or destructive bony lesions were identified. Given his history of malignant melanoma and the investigation findings, the patient was diagnosed as having metastatic malignant melanoma. 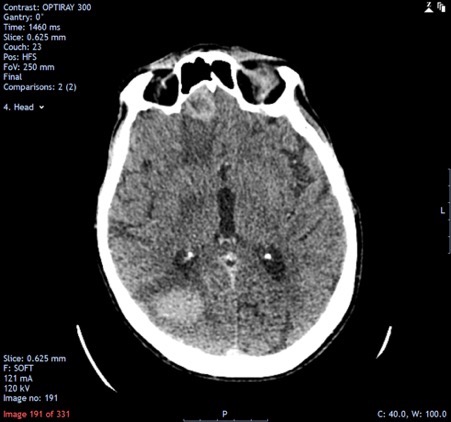 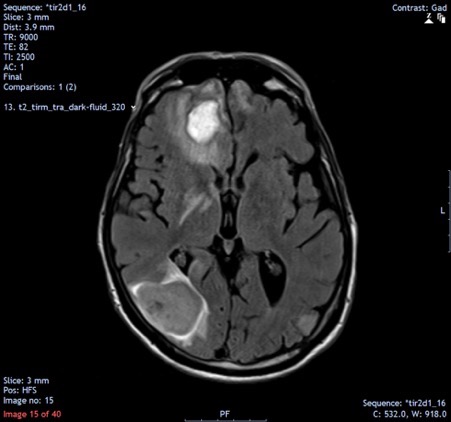 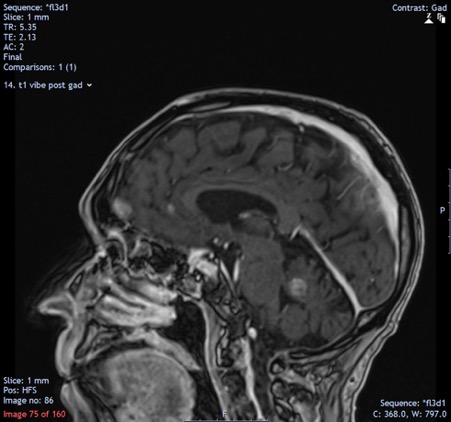 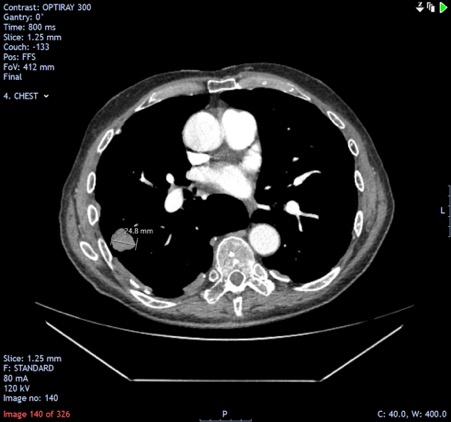 The Skin Multidisciplinary Team meeting concluded that best supportive care was the ideal management for him, and he was discharged to a care home for palliation. His neurological deterioration progressed, and he died a few months later.

PD and cancer in theory are polar opposites when it comes to their pathophysiology as one involves cellular degeneration and the other uncontrolled cellular proliferation, as one review article aptly puts it[1]. Therefore, it is not unreasonable to postulate that where one exists there should be a low risk for the other. Many epidemiological studies do in fact support this theory where PD patients have a decreased risk of developing lung, bladder and colorectal cancers. However, several studies have revealed a significant association between PD and malignant melanoma (Table 1). One study concluded that there was a seven-fold increase in the risk of developing any type of melanoma in patients with PD[1]. Additionally, a retrospective cohort study published by the Mayo Clinic in 2017 revealed that on average patients with PD were diagnosed with melanoma 7 years earlier than patients without PD[2]. Interestingly, the reverse is also true, where melanoma patients were found to have a 50% increased risk of developing PD[1]. The findings linking PD and melanoma are so consistent that one study commented that this association could not be easily explained away by improved medical surveillance of these patients[2].
While the root cause of this association remains unclear, several genes have been implicated in the pathogenesis of both melanomas and PD, namely:

Environmental factors such as exposure to pesticides that affect the mitochondrial electron transfer pathway (paraquat, maneb and rotenone) have also been linked to PD. The risk is found to be increased in those with more than 10–20 years of exposure[3].