Pulmonary arteriovenous malformations (PAVMs) are rare vascular anomalies. Alternative designations are pulmonary arteriovenous fistulae or aneurysms. Although mostly asymptomatic, PAVMs can cause respiratory symptoms due to right-to-left shunt. The central nervous system is a potential target for complications, including stroke, as a result of paradoxical embolism. In this report, the authors describe an unusual case of cerebral emboli caused by paradoxical embolism through a PAVM, presenting with a broad pathology including orthodeoxia, central cyanosis and digital clubbing, which should be kept in mind since misdiagnosis may cause severe morbidity in young adults.

A right-handed 46-year-old woman with a history of previously treated peripheral venous insufficiency, and not on any daily medication, was admitted to the Emergency Department 12 hours after the sudden onset of focal hypoaesthesia of her upper left limb. She also referred a frontal, tension-type headache, of moderate intensity with no signs of intracranial hypertension. There were no other focal neurological symptoms, fever or infection, chest pain, epistaxis, haemoptysis or telangiectasias. Family diseases were denied.
The patient was haemodynamically stable (blood pressure 138/42 mmHg; pulse 78 bpm, regular and rhythmic). Her Glasgow Coma Scale was 15/15. Neurological examination revealed touch and pain hypoaesthesia of the left upper limb with no further findings. The patient’s National Institutes of Health Stroke Scale (NIHSS) score was 1. Electrocardiogram showed sinus rhythm, without any alterations. Head CT and supra-aortic and intracranial CT angiograms were performed and revealed a recent fronto-insular right infarction. A stroke was assumed and the patient was admitted to the medical ward. No cardiovascular risk factors were identified during hospitalization. Immunological, infectious, endocrine and hypercoagulable states were ruled out. Magnetic resonance imaging (Fig. 1) was performed to assess the extent of cerebrovascular disease and revealed several recent cortical embolic infarctions in both hemispheres: in the bilateral fronto-insular cortex, right posterior temporal lobe and right post-central parietal gyrus. No embolic source was identified on transoesophageal echocardiogram. Venous Doppler ultrasound of both lower extremities carried out 5 days after admission revealed varicose dilatations in both popliteal veins and the right external saphenous vein, absence of the left external saphenous vein, and no evidence of thrombi in the veins. 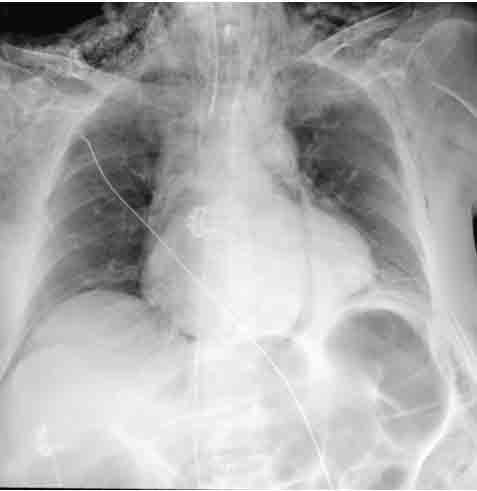 The physical examination was also remarkable for labial cyanosis and discreet digital clubbing. Blood gas analysis demonstrated hypoxaemia, and an increased alveolar-arterial gradient (AaG) with no response to oxygen therapy, indicating a shunt. Platypnoea was denied, but orthodeoxia was found, with a desaturation of 4% in the supine position. Laboratory findings showed polycythaemia (Hb 17.7 g/dl, Hct 48.6%), erythropoietin (EPO) was elevated, and testing for the JAK2 mutation was negative. D-dimers were elevated at admission (894 ng/ml). Chest x-ray did not show any abnormalities (Fig. 2). 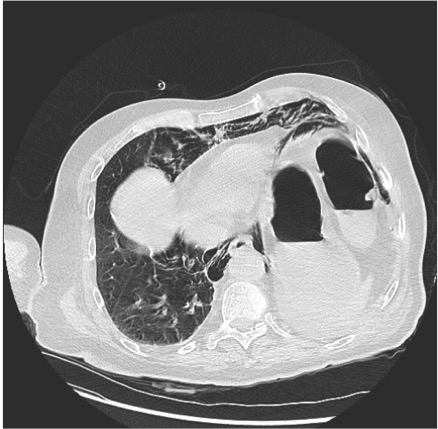 Contrast-enhanced transthoracic echocardiography (TTE) revealed a right-to-left shunt, with simultaneous opacification of the right and left cavities during the fourth cardiac cycle, indicating an extra-cardiac shunt (Video 1). Patent foramen ovale (PFO) was excluded by transoesophageal echocardiography.
Following discovery of the shunt, a contrast-enhanced thoracic CT scan was performed, which demonstrated a pulmonary arterio-venous malformation in the right lower lobe, showing communication between the subsegmental branch of the right inferior lobar artery and the tributary vein of the right inferior pulmonary vein, with a diameter of 25×21 mm in the axial plane (Video 2).
Neurological deficits stabilized, but left upper limb hypoaesthesia remained. The patient was discharged under oral anticoagulation with warfarin, and was later referred for embolization of the lesion by the Interventional Radiology department. No new events had occurred at the time of follow-up consultation.

Video 1. Contrast-enhanced transthoracic echocardiography (TTE) showing simultaneous opacification of the right and left cavities during the fourth cardiac cycle
Video 2. Pulmonary arterio-venous malformation in the right lower lobe, showing communication between the subsegmental branch of the right inferior lobar artery and the tributary vein of the right inferior pulmonary vein, with a diameter of 25×21 mm in the axial plane

Pulmonary arteriovenous malformations (PAVMs) are uncommon, abnormal vascular communications between pulmonary arteries and veins. They are an important consideration in the differential diagnosis and should always be suspected in patients who present with unexplained dyspnoea or hypoxaemia as well as stroke or brain abscess[1]. They are associated with hereditary haemorrhagic telangiectasia (HHT) or are idiopathic. In the latter situation, symptoms usually begin during the fourth to sixth decades of life, while symptoms of HHT often develop before age 20[2]. The most common symptoms are dyspnoea (13–53%) and haemoptysis (7–30%)[2,3]. Neurological complications are also frequent (9–41%) and caused by paradoxical embolization through the PAVM, more commonly in patients with feeding arteries >2 mm in diameter[4]. Some studies report orthodeoxia in 30% of patients[5]. Polycythaemia due to chronic hypoxaemia is described as rare[1]. Since an increase in serum EPO was present in our patient, polycythaemia was assumed to be a secondary symptom in a patient without pulmonary risk or altitude activity.
This case was initially categorized as an embolic stroke of undetermined source (ESUS). However, after meticulous anamnesis, extensive physical examination and additional diagnostic examinations suggested PAVM, a rare cause of embolic stroke in young adults. The presence in this patient of large varicose veins in the lower limbs suggests that these may have been the origin of the embolism, despite the absence of thrombi in the phlebographic study performed a few days later. Nevertheless, we cannot rule out the possibility that the embolus formed in the pulmonary arteriovenous malformation, especially when polycythaemia, which affects blood viscosity, was present.
The patient was referred for embolization as most PAVMs are treated with embolotherapy. The selection of patients depends on feeding artery diameter, related symptoms and the patient’s ability to tolerate the procedure. As a result, not all PAVMs require intervention[6].