Background: Lateralized involuntary movements consistent with hemichorea-hemiballism (HCHB) may appear following the development of contralateral haemorrhagic or ischaemic lesions of the basal ganglia, particularly the striatum (caudate nucleus and putamen). This condition is called vascular HCHB, but the same symptoms can be caused by a completely different striatal lesion. Glycaemic HCHB may occur in patients with uncontrolled hyperglycaemia: basal ganglia hyperdensity is seen on brain CT, while increased T1 signal intensity and reduced susceptibility-weighted imaging (SWI) and gradient-echo sequences (T2*-GRE) are detected on MRI.
Case description: An 83-year-old man with multiple vascular risk factors and uncontrolled chronic hyperglycaemia was admitted for ischaemic stroke presenting with dysarthria and mild left hemiparesis. No involuntary movements were reported at admission. The emergent brain CT scan was negative for vascular acute lesions, while a mild bilateral hyperdensity of the striata was detectable. Involuntary movements on the left side of the body, consistent with HCHB, appeared 27 days later. The alterations on brain CT completely disappeared after 3 months. On brain MRI, the T1 signal alterations resolved after 10 months, while SWI and T2*-GRE sequences showed persisting alterations after 2 years.
Discussion: Detailed brain imaging demonstrated evolution of striatal alterations of glycaemic HCHB before the appearance of involuntary movements and during the following 2 years. The association between ischaemic stroke and glycaemic HCHB favours the hypothesis that chronic hyperglycaemia more likely determines striatal alterations and the clinical picture of HCHB when vascular hypoperfusion also occurs.

The most frequent causes of sporadic chorea are vascular lesions of the basal ganglia; in particular, unilateral lesions of the basal ganglia may determine contralateral involuntary movement[1]. In hemichorea, lateralized movements are rapid, irregular and affect the distal parts of the limbs, while in hemiballism movements are proximal and flinging. Both types of involuntary movements often coexist in a condition called hemichorea-hemiballism (HCHB).
Patients with stroke sometimes develop HCHB along with hemiparesis; in the majority of cases, involuntary movements improve only partially over time. Patients with uncontrolled hyperglycaemia may develop HCHB without evidence of vascular lesions in a condition called glycaemic HCHB[2]. In vascular hemichorea, a contralateral ischaemic or haemorrhagic lesion of the basal ganglia can be demonstrated, while neuroradiological findings are completely different in patients with glycaemic HCHB. Brain CT shows hyperdensity, while brain magnetic resonance imaging (MRI) shows T1-weighted hyperintensity usually involving the striatum contralateral to the affected side or bilaterally. Susceptibility weighted imaging (SWI) and gradient echo sequence T2*-weighted images (T2*-GRE) usually show signal reduction and negative DWI and ADC signals in the same region[3–6]. There is no mass effect and the lesions may be fully reversible[7]. The pathological mechanisms of such lesions are still elusive: some authors suggest petechial haemorrhage, metal deposition (e.g., calcium, manganese) or mild ischaemia causing astrocyte swelling[8]. The temporal evolution of the neuroimaging has not been widely studied and only one report has described typical findings on brain CT before symptom onset[9].

We describe the case of an 83-year-old man with a history of arterial hypertension, mild chronic renal insufficiency, and prostate cancer treated with radiation therapy, bicalutamide, tamoxifen and triptorelin. He had had a previous mild ischaemic stroke with transient right facio-brachio-crural hemiparesis followed by pneumonia caused by Staphylococcus aureus with complete recovery. At that time, blood glucose levels were 114 and 99 mg/dl (normal values 65–110 mg/dl). After 6 years he presented with thrombosis of the right common iliac vein treated with low-molecular-weight heparin, closely followed by myocardial infarction, consequent coronary stent implantation and double antiplatelet therapy (dipyridamole 200 mg/day plus acetylsalicylic acid 150 mg/day).
Four months later, worsening of walking ability was closely followed by dysarthria about 1 week later. The patient was admitted to our hospital where he was diagnosed with mild ischaemic stroke, showing mild left hemiparesis without sensory impairment. An emergent brain CT was negative for acute lesions and only former small chronic ischaemic lesions were reported (Fig. 1, –26 days). Later review showed mild bilateral hypodensity of the striata was already present, which became clearer on another CT scan performed 2 days later (Fig. 1, –24 days). No involuntary movements were reported at admission or during the following days while the patient was in the university neurology ward. Blood tests showed very high blood glucose (505 mg/dl) and glycated haemoglobin of 15.7% (normal values 4.3–5.8%). Subcutaneous insulin therapy was started as suggested by the consultant diabetologist. Mild dysphagia was present but no parenteral nutrition was necessary. Twenty-seven days after admission, while the patient was in the neurorehabilitation ward, he developed involuntary movements on the left side of his body, consistent with moderate HCHB. He was diagnosed with glycaemic HCHB and started treatment with olanzapine (up to 5 mg/day for 7 days), then haloperidol (up to 3 mg/day for 20 days) and finally tetrabenazine (up to 25 mg/day for about 6 months), with a partial reduction in involuntary movements.
The first brain MRI was performed 7 days after HCHB onset and confirmed an increase in signal intensity on axial T1-weighted imaging in both striata (Fig. 2). Notably, the hyperintensity was asymmetrical since the right striatum, contralateral to the affected side of the body, was clearly more hyperintense than the left striatum; DWI and ADC were negative. Such asymmetry was much less evident on CT scans. The patient underwent neurological follow-up which showed a gradual reduction in HCHB. Tetrabenazine was stopped and involuntary movement reappeared only while the patient was speaking (Video 1). This condition remained unaltered during 26 months of follow-up.
To monitor how lesions evolved, brain CT and MRI were repeated for up to 1.5 years after HCHB onset. Striatal hyperdensity on CT scans was no longer detectable after about 3 months (Fig. 1). Striatal hyperintensity on T1 MRI disappeared completely after 10 months, while striatal hypointensity on SWI and T2*-GRE still persisted 1.5 years later (Fig. 2). Table 1 shows the times and results of blood glucose and glycated haemoglobin tests and brain neuroimaging.

Video 1. Video recorded 3 months after hemichorea-hemiballism onset during a follow-up visit. Involuntary movements in the left limbs were greatly reduced but still present, mostly when the patient was speaking. Involuntary movements were mainly choreoathetoid, affecting the distal part of the upper and lower limbs 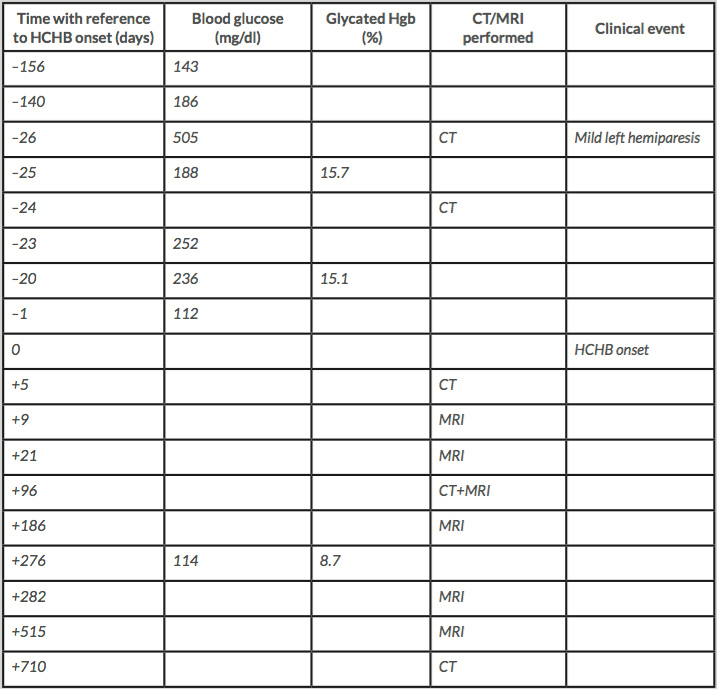